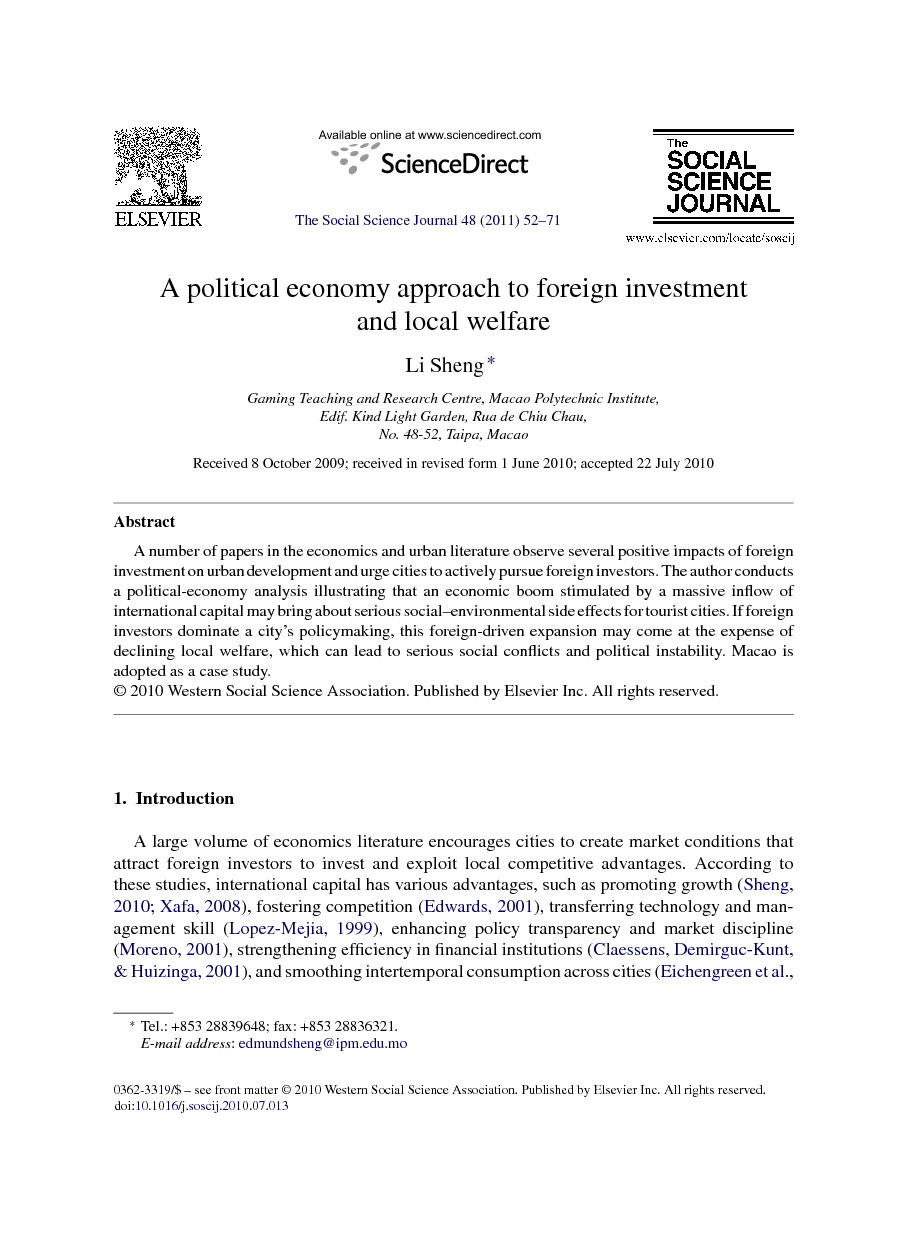 A number of papers in the economics and urban literature observe several positive impacts of foreign investment on urban development and urge cities to actively pursue foreign investors. The author conducts a political-economy analysis illustrating that an economic boom stimulated by a massive inflow of international capital may bring about serious social–environmental side effects for tourist cities. If foreign investors dominate a city's policymaking, this foreign-driven expansion may come at the expense of declining local welfare, which can lead to serious social conflicts and political instability. Macao is adopted as a case study.

A large volume of economics literature encourages cities to create market conditions that attract foreign investors to invest and exploit local competitive advantages. According to these studies, international capital has various advantages, such as promoting growth (Sheng, 2010 and Xafa, 2008), fostering competition (Edwards, 2001), transferring technology and management skill (Lopez-Mejia, 1999), enhancing policy transparency and market discipline (Moreno, 2001), strengthening efficiency in financial institutions (Claessens, Demirguc-Kunt, & Huizinga, 2001), and smoothing intertemporal consumption across cities (Eichengreen et al., 1999). Vast urban literature also finds that foreign investment enhances urban development. Sit and Yang (1997) find that foreign investors have been playing a significant and positive role in transforming the Pearl River Delta from a closed, self-reliant agrarian region into an industrialized and urbanized area, enabling it to integrate with the international division of labor. Turnock (1997) argues that foreign investors help to accelerate urban restructuring, exploit comparative advantages, and situate Eastern European cities within the global division of labor. Foreign investment also stimulates competition by pushing domestic enterprises to innovate. Wu (2001) finds that foreign investors account for a significant portion of China's development finance. This made large-scale infrastructure and prestigious, high-profile projects possible and helps to transform Chinese cities from a mixed, cellular pattern to a highly differentiated pattern of land uses. Wei, Leung, and Luo (2006) find significant contributions by foreign investors to the increase in external trade, global city and financial center formation, as well as overall rapid economic growth in the city of Shanghai. Positive evaluations of foreign investment in urban context are also provided by Wu, 2000 and Wu, 2003, Dick and Rimmer (1998), Bullard, Bello, and Mallhotra (1998), and Shi and Hamnett (2002). However, in the context of tourist cities, a number of studies find serious side effects accompanying an overgrowth of tourism, which is driven by foreign investment. Economic side effects, such as leakages, increased costs of living, and asset bubbles, are documented in Copeland (1991), Wilkinson (1999), Scheyvens and Momsen (2008), Potter (1993, p. 102), Hoti, McAleer, and Shareef (2005), Harrison (2003, p. 7), Chand (2003), Sheng and Tsui, 2009a and Sheng and Tsui, 2009c, Mowforth and Munt (2003, p. 273), and Croes (2006). Environmental side effects, such as air pollution, noise pollution, and overuse of natural resources, are analyzed in Briassoulis (2002), Wilkinson (1999), Sheng and Tsui (2010), Liu and Jenkins (1996, p. 113), and Gössling (2001). Social side effects, such as increased crime, social polarization, and cultural alienation are illustrated in Shaw and Shaw (1999), Carbone (2005), Sheng, in press-a and Sheng, in press-b, Scheyvens and Momsen (2008), Ghosh, Siddique, and Gabbay (2003), Williams and Hall, 2000 and Williams and Hall, 2002, Gössling and Schulz (2005), and Stonich (2003). To address the side effects from foreign investment at its root, the author, by focusing on the different preferences of foreign investors and host communities, conducts a political-economic analysis of tourist cities to illustrate how massive inflows of foreign capital may cause serious social–environmental side effects, in addition to the economic boom, and how the interests of foreign investors and host communities might diverge in the presence of significant side effects. The author focuses specifically on a city's degree of openness and shows, in detail, the rational preferences of host communities and foreign investors. In this paper, ‘tourist city’ refers to a city in which the tourism sector has a large or dominant share in the local economy, and where the host community is mainly a provider, but not a consumer, of tourism services. After theoretical modeling, the author presents a case study of Macao, a booming tourist city, which has experienced spectacular growth since its gaming sector was liberalized to foreign investors, but has also suffered from serious socio-environmental side effects. By critically reevaluating the negative impacts of massive foreign capital inflow in the case study, this paper tries to balance the prevailing views in the existing literature and to inspire city planners to formulate more comprehensive foreign investment policies.

The author developed a political-economy model to analyze the diverging preferences of foreign investors and the host community with regard to a tourist city's openness in the presence of significant social–environmental side effects accompanying tourism boom. Having a tendency toward profit maximization for their investment, foreign investors actually have several opposing interests to that of the invested city, when considered as a whole. If the interests and influences of foreign investors dominate a city's policymaking, the result may not be desirable for the host community. Foreign investors’ profits are made at the expense of the majority of locals and the sustainability of the city's development. The theoretical construct proposed by this paper makes a unique contribution to our understanding of urban policymaking as the important role of foreign investors cannot be overlooked or underestimated. As illustrated by Sheng and Tsui (2009b), the host community is never homogenous and in harmony in the face of rapid tourism growth. Therefore, different preferences with regard to a city's openness arise: beneficiaries prefer more openness and nonbeneficiaries prefer less openness. If so, foreign investors and local beneficiaries may find common interests and cooperate with each other to a certain extent. Also, the regional government (one level up from the city) and the central government may have their own preferences with regard to the city's openness. These entities consider the issue in a broader regional and national context, and in many cases, it may not be in accordance with the preferences of the vast nonbeneficiary group in the city. Moreover, foreign investors, especially very large multinational enterprises, possess considerable political influence on their international partners. Backed by their home governments, they may put considerable political pressure on invested cities/countries to bargain for preferential treatment. If this is the case, a host community's interest may even be ‘betrayed’ for political deals at the international level. Although the present study focuses on the ‘dark side’ of foreign investment in the context of urban development, we do not want to give the impression that foreign investment should be judged negatively. We simply attempt to counterbalance the widely accepted liberal doctrine with regard to foreign investment. We appreciate that foreign investors not only bring monetary resources into host communities but also (and perhaps even more importantly) encourage entrepreneurship, which is generally not ingrained in most of the developing world. There is vast evidence of how foreign investors help host countries to open new businesses, transform innovations into economic goods, revitalize existing organizations in response to opportunities, raise funds via venture capital and angel funding, and facilitate entrepreneurship in its social, cultural, and even political forms (Ledgerwood and Broadhurst, 1999, Marsden and Smith, 2005, Russell and Faulkner, 2004, Venkataraman, 2004, Watkins-Mathys and Foster, 2006 and Yeoh et al., 2005). In the case of Macao, foreign competition greatly enriches the services and choices provided for local customers. Luxury hotels, exotic restaurants, high-quality shops, theme parks, event venues, and other world-class tourism facilities, as well as brand-new services are arising in the booming city. While Macao residents used to go shopping and enjoy leisure activities in Hong Kong, because the home city was unable to provide quality goods and services, Macao is now currently considered a leisure and shopping paradise in ‘Greater China’, with nearly 100,000 tourists daily visiting and enjoying its high-quality tourism services (Macao Statistics and Census Services, 2008). Before gaming liberalization, Macao's local casinos were famous for their substandard physical facilities and for questionable customer-service practices, such as pressing customers for tips. Nowadays, local firms are establishing new integrated casinos with facilities comparable to those of their foreign counterparts and providing high-quality services, adopting best practices learned from foreign firms. In a broad sense, foreign investment has stimulated economic growth, bringing about significant progress for the city of Macao and improving welfare in the local community. Using its fast-increasing gaming revenue, the Macao government has invested resources to improve its public infrastructure, medical care system, educational system, and social security system (see Table 5). In 2001, there was one doctor and one nurse for every 920 and 1,622 residents, respectively, compared to 810 and 1322 in 2007. Educational facilities are also improving: 22.8 students shared one teacher in the educational system in the academic year 1999/2000, compared to 16.4 in 2006/2007 (Macao Statistics and Census Services 1999–2007). Also, the Macao government is now able to guarantee an annual cash rebate of 6000 Patacas to each resident and is building thousands of ‘economic housing’ units for the low-income class (Macao Daily News, July 18, 2009,). As one of China's SARs and the largest casino city in the world, Macao differs from other tourist cities in many ways. Therefore, the validity of the model needs empirical support from future studies across different tourist cities. Yet, given that many tourist cities share similar characteristics with Macao in that they are highly dependent on foreign investment and suffer from various social–environmental side effects, this case study is illuminating. Hopefully, the findings presented here will inspire colleagues to deepen their research in this area and to make more practical policy advice that is conducive to sustainable development of tourist cities.