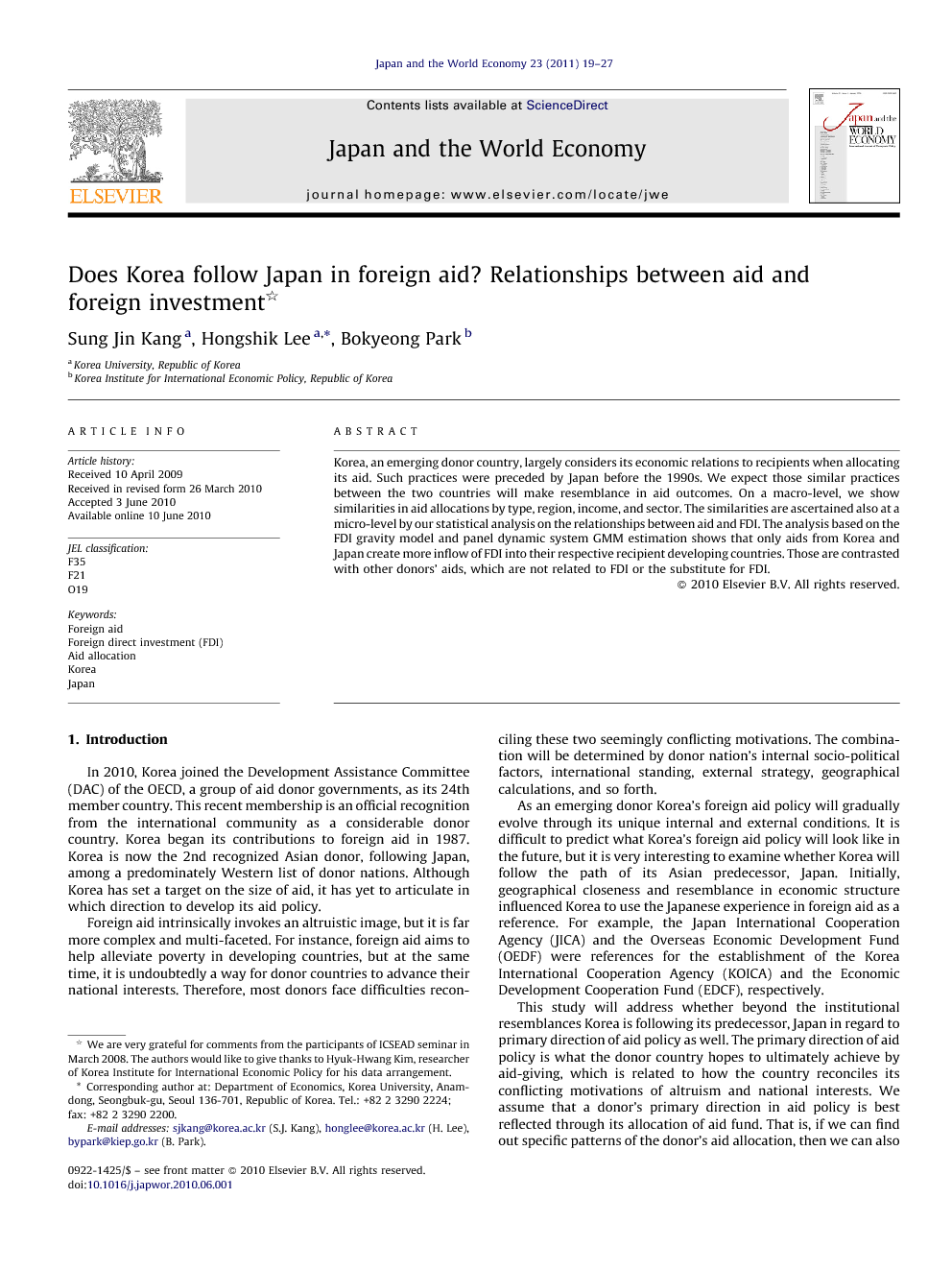 Korea, an emerging donor country, largely considers its economic relations to recipients when allocating its aid. Such practices were preceded by Japan before the 1990s. We expect those similar practices between the two countries will make resemblance in aid outcomes. On a macro-level, we show similarities in aid allocations by type, region, income, and sector. The similarities are ascertained also at a micro-level by our statistical analysis on the relationships between aid and FDI. The analysis based on the FDI gravity model and panel dynamic system GMM estimation shows that only aids from Korea and Japan create more inflow of FDI into their respective recipient developing countries. Those are contrasted with other donors’ aids, which are not related to FDI or the substitute for FDI.

In 2010, Korea joined the Development Assistance Committee (DAC) of the OECD, a group of aid donor governments, as its 24th member country. This recent membership is an official recognition from the international community as a considerable donor country. Korea began its contributions to foreign aid in 1987. Korea is now the 2nd recognized Asian donor, following Japan, among a predominately Western list of donor nations. Although Korea has set a target on the size of aid, it has yet to articulate in which direction to develop its aid policy. Foreign aid intrinsically invokes an altruistic image, but it is far more complex and multi-faceted. For instance, foreign aid aims to help alleviate poverty in developing countries, but at the same time, it is undoubtedly a way for donor countries to advance their national interests. Therefore, most donors face difficulties reconciling these two seemingly conflicting motivations. The combination will be determined by donor nation's internal socio-political factors, international standing, external strategy, geographical calculations, and so forth. As an emerging donor Korea's foreign aid policy will gradually evolve through its unique internal and external conditions. It is difficult to predict what Korea's foreign aid policy will look like in the future, but it is very interesting to examine whether Korea will follow the path of its Asian predecessor, Japan. Initially, geographical closeness and resemblance in economic structure influenced Korea to use the Japanese experience in foreign aid as a reference. For example, the Japan International Cooperation Agency (JICA) and the Overseas Economic Development Fund (OEDF) were references for the establishment of the Korea International Cooperation Agency (KOICA) and the Economic Development Cooperation Fund (EDCF), respectively. This study will address whether beyond the institutional resemblances Korea is following its predecessor, Japan in regard to primary direction of aid policy as well. The primary direction of aid policy is what the donor country hopes to ultimately achieve by aid-giving, which is related to how the country reconciles its conflicting motivations of altruism and national interests. We assume that a donor's primary direction in aid policy is best reflected through its allocation of aid fund. That is, if we can find out specific patterns of the donor's aid allocation, then we can also answer what the goals of its aid are. Based on this assumption, this study will focus on examining whether there are substantial similarities in aid allocation between Korea and Japan. The similarities will be tested through both macro- and micro-level analyses. Macro-level analysis compares the distribution of aggregate aid between the two countries by type, region, sector, recipients’ income level, and so on. On a micro-level, how foreign aid is related to foreign direct investment (FDI) will be tested using bilateral data. In particular we will test whether foreign aid, which is a kind of public resource, has a catalyzing effect on private foreign investment using the FDI gravity model and panel dynamic system GMM estimation. In conclusion we insist that there are strong similarities between Korea and Japan with respect to aid allocation, and this is further highlighted by contrasts with other donors.

We showed that Korea's current foreign aid practices have strong resemblances to Japan's aid practices of the 1980s. The resemblance was very clear on a macro-level as shown in the aid distributions by type, region, income, and sector. Furthermore the similarity was ascertained again, but on a micro-level, through an analysis of the relationship between public aid and private investment. From pooled data of different donors, we could not find a general positive effect of aid on foreign investment inflow, which is consistent with the results of other studies. Our results, however, portray that aid only from Korea and Japan leads to increased foreign investment inflow. The effect was stronger for Korea's aid than Japan's. In contrast, aid from donors other than these two countries served as a substitute for foreign investment rather than a complement. Aid from The Netherlands, which is regarded as highly humanitarian, showed very strong substitute effects. This vanguard effect of Korean aid seems to reflect its practices in aid allocation. In selecting recipient countries for preferential loans, Korea's Fund Management Committee, which is the supreme decision body, considers their economic ties with Korea to be an important factor, in addition to their economic conditions, needs, and governance. Although it is not widely revealed, particularly candidate countries’ investment and trade relations with Korea are taken into account.13 Because preferential loans account for no less than half of its total aid, such loan allocation criteria will affect the overall structure of Korean aid. In 2008, the Korean government designated eighteen core assistance countries. The selection of those countries largely considers bilateral economic relations to be an important factor (Korean Government, 2008). There is little doubt that how large of a potential a candidate country has of becoming a host of Korea's FDI is one of the important economic factors that are considered. These practices regarding aid allocation in Korea confirm our statistical outcome on the vanguard effect. The vanguard effect found in aid from Korea and Japan should not necessarily be criticized for using aid as a means to seek investment interests. If aid paves the way for private investment to recipient countries, it is a desirable effect for development finance. Because public aid alone is not enough to finance the sustainable development of a poor country, the catalyzing effect of aid needs to be reinforced. If the effect works only for investment from the donor and, therefore, crowds out investments from others, it is undoubtedly not desirable. Whether aid from Korea and Japan has this adverse effect or not needs to be tested in further studies. According to our analysis, Korea appears to have followed the past path of Japan in foreign aid so far. This conclusion is supported by both macro- and micro-analyses. Therefore, if Korea can discover the weakness of Japan's previous aid policy as well as its remedy, then it may avoid repeating Japan's mistakes and shorten the road to effective and appreciated foreign aid.