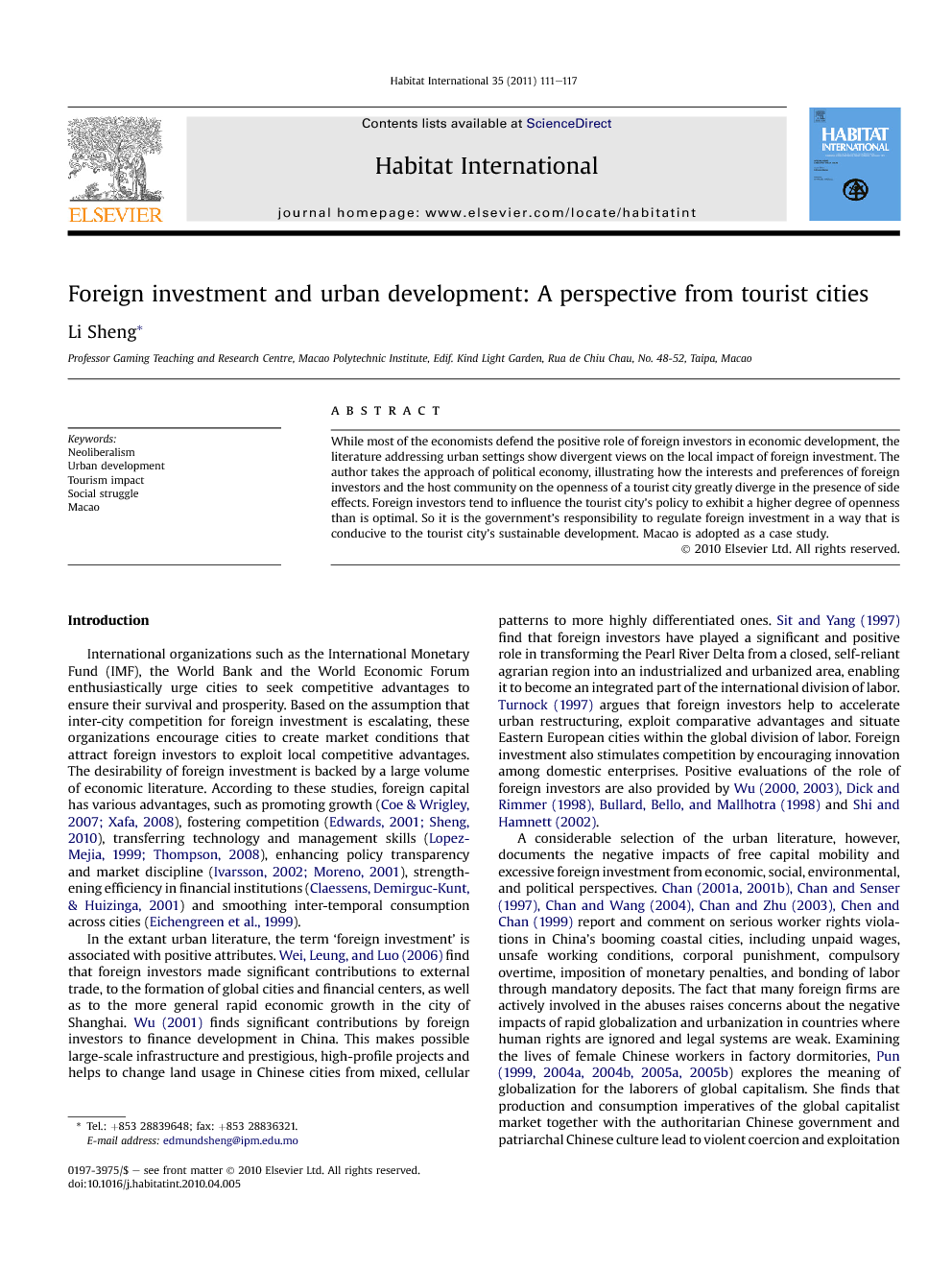 This paper has analyzed the diverging preferences of foreign investors and the host community with regard to the economic openness of a tourist city in the presence of side effects. Tending toward profit maximization for their investment, foreign investors have somewhat opposing interests to those of the host city. If foreign investors dominate a city’s policy making, the result may not be desirable for the host community. Foreign investors’ profits are made at the expense of the majority of local inhabitants and the sustainability of the city’s development. Under certain circumstances, foreign investment may lead to adverse impacts on a tourist city’s urban development, causing social unrest and political instability as well as damage to the interests of all parties involved. The case of Macao makes a unique contribution to our understanding of urban policy making, since the role of foreign investors cannot be overlooked or underestimated in reality. As illustrated by Sheng and Tsui (2009a), the host community is never homogenous or harmonious in the face of the rapid growth of tourism. While beneficiary groups may profit substantially from a boom in tourism and thus be better equipped to shoulder the side effects, non-beneficiary group may experience the contrary. Therefore, different preferences with regard to the liberalization of a tourist city arise: beneficiaries prefer more openness while non-beneficiaries prefer less. This being said, foreign investors and local beneficiaries may find common interests and cooperate with each other to a certain extent. Also, regional (one level up from the city) and central governments may have their own preferences with regard to the city’s liberalization. They consider the issue in a broader regional and national context, and in many cases it may not coincide with the preferences of the vast non-beneficiary groups in the city. Moreover, foreign investors, especially mega-multinational enterprises, possess considerable political influence on their international partners. Backed by their own governments, they may put considerable political pressure on invested cities and countries to bargain for preferential treatment. If this is the case, a host community’s interest may even be ‘betrayed’ for political deals at the international level. Although the present study focuses on the ‘dark side’ of foreign investment in the context of urban development, we do not want to give the impression that foreign investment should only be seen negatively. We simply attempt to counterbalance a widely accepted liberal doctrine with regard to foreign investment. It is understandable that foreign investors are profit-driven and prefer broad openness for the cities in which they invest. Foreign investment can be a positive, a negative or a neutral thing to the city concerned. The role of the decision makers in the city itself is what must be addressed. They can choose to either pursue broader liberalization by reinforcing and facilitating foreign investment efforts, or they can place certain restrictions on openness in order to regulate the city’s overall growth. While the former may result in serious side effects, the latter can facilitate sustainable development of the city. In terms of the current case study, as one of China’s SARs and the largest casino city in the world, Macao has many characteristics that are different from other tourist cities. Yet, like Macao, many tourist cities are highly dependent on foreign investment and suffer from various side effects, thus this case study is representative to a certain extent. Hopefully, the results presented here will inspire others to pursue their research in this area and make more practical suggestions for the sustainable development of tourist cities.