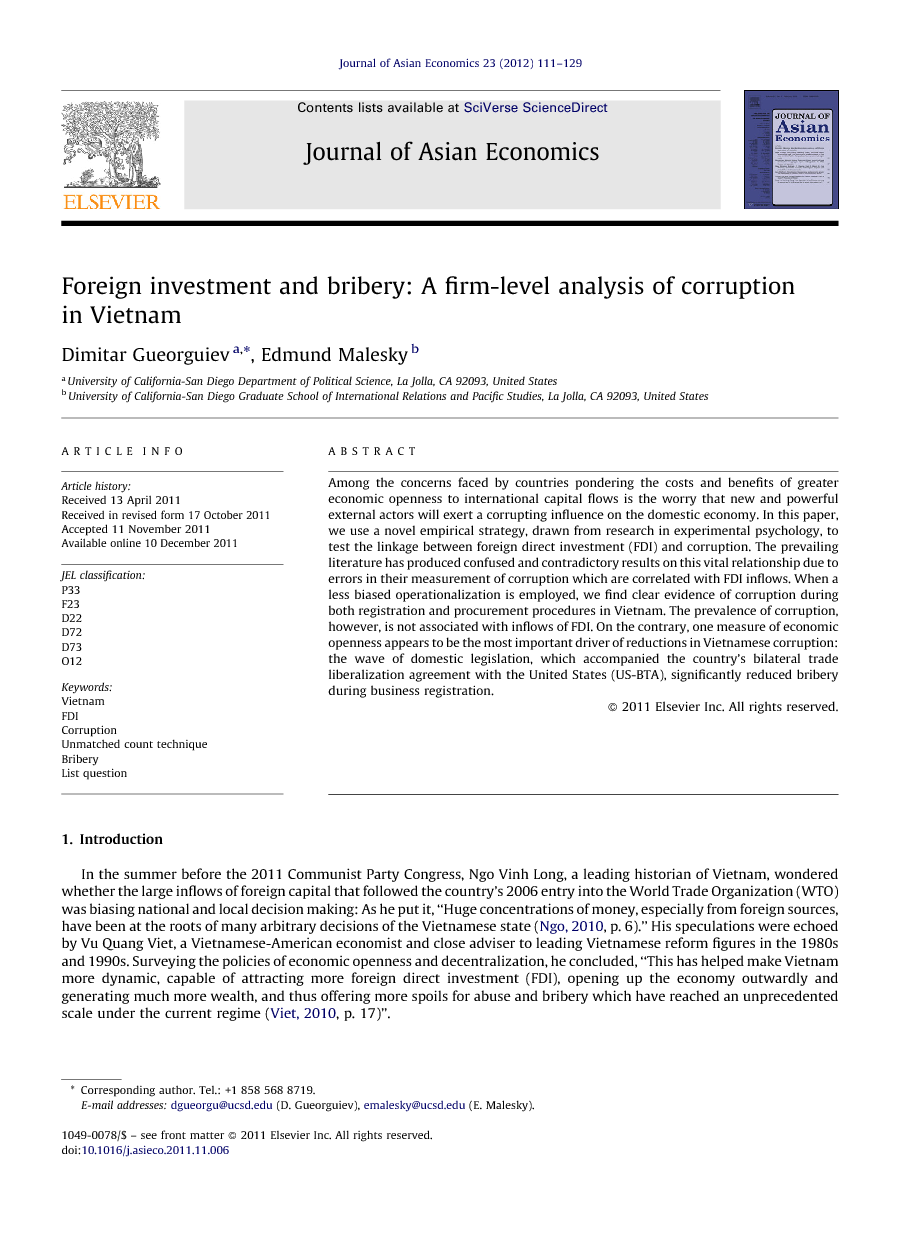 Among the concerns faced by countries pondering the costs and benefits of greater economic openness to international capital flows is the worry that new and powerful external actors will exert a corrupting influence on the domestic economy. In this paper, we use a novel empirical strategy, drawn from research in experimental psychology, to test the linkage between foreign direct investment (FDI) and corruption. The prevailing literature has produced confused and contradictory results on this vital relationship due to errors in their measurement of corruption which are correlated with FDI inflows. When a less biased operationalization is employed, we find clear evidence of corruption during both registration and procurement procedures in Vietnam. The prevalence of corruption, however, is not associated with inflows of FDI. On the contrary, one measure of economic openness appears to be the most important driver of reductions in Vietnamese corruption: the wave of domestic legislation, which accompanied the country's bilateral trade liberalization agreement with the United States (US-BTA), significantly reduced bribery during business registration.

In the summer before the 2011 Communist Party Congress, Ngo Vinh Long, a leading historian of Vietnam, wondered whether the large inflows of foreign capital that followed the country's 2006 entry into the World Trade Organization (WTO) was biasing national and local decision making: As he put it, “Huge concentrations of money, especially from foreign sources, have been at the roots of many arbitrary decisions of the Vietnamese state (Ngo, 2010, p. 6).” His speculations were echoed by Vu Quang Viet, a Vietnamese-American economist and close adviser to leading Vietnamese reform figures in the 1980s and 1990s. Surveying the policies of economic openness and decentralization, he concluded, “This has helped make Vietnam more dynamic, capable of attracting more foreign direct investment (FDI), opening up the economy outwardly and generating much more wealth, and thus offering more spoils for abuse and bribery which have reached an unprecedented scale under the current regime (Viet, 2010, p. 17)”. The issues highlighted by these prominent analysts raise important questions, not just for Vietnam, but for all countries pondering the costs and benefits of greater economic openness to international capital flows. In this paper, we use a novel empirical strategy, drawn from research in experimental psychology, to test the linkage between FDI and corruption hypothesized above. In so doing, we make two interlinked arguments. The prevailing literature has produced confused and contradictory results on this vital relationship, because errors in their measurement of corruption are correlated with FDI inflows, leading to spurious findings. When a less biased operationalization is employed, we find clear evidence of corruption during both registration and procurement procedures in Vietnam.1 In addition, the most important driver of reductions in Vietnamese bribe schedules appears to be the wave of legislation that accompanied the country's bilateral trade agreement with the United States (US-BTA), which significantly reduced corruption during business registration. Beyond simply studying the direct relationship between openness and corruption, however, we also pay careful attention to conditioning variables. After all, policy-makers cannot simply reject the documented benefits of foreign capital flows (job growth, revenue, expertise, technology and production spillovers), because they fear increased bribe schedules. Rather policy-makers want to know what economic sectors are particularly vulnerable to corruption, what types of capital flows are prone to engaging in corruption, and what policy measures can facilitate investment while limiting the negative fallout. Because our empirical strategy allows for the analysis of firm-level determinants, we can move beyond aggregate relationships to answer these questions directly. To accurately measure corruption and its association with international capital flows, we embedded two survey experiments in the most comprehensive annual assessment of the businessmen environment in Vietnam, known as the Provincial Competitiveness Index (PCI), which is jointly administered by the Vietnamese Chamber of Commerce and Industry and the US-AID funded Vietnam Competitiveness Initiative (VNCI) (see Malesky, 2009 for methodological details). As a result, the samples are highly representative of the national and provincial level business population in Vietnam, thereby providing extremely accurate conclusions about the extent of corruption affecting the Vietnamese business sector, both with respect to small-scale corruption during business registration and the large-scale corruption associated with procurement projects. The rest of the paper is structured into eight sections. Section 2 situates the theoretical questions motivating this paper within the broader international political economy literature on corruption and lays out the core hypothesis to be explored. Section 3 discusses a number of common research design and measurement problems which have afflicted previous efforts at studying the relationship between corruption and foreign investment. Section 4 provides a description of the original data used in this paper. Section 5 describes the core empirical strategy used in the analysis and presents aggregate results related to trends in corruption among sampled domestic and foreign firms. Section 6 formally expresses the estimation technique for the main firm-level empirical analysis and lists all variables of interest. Section 7 presents and explains results from the firm-level analysis. Section 8 provides concluding remarks and caveats to the findings presented. Anticipating our results, we find clear evidence of both small and large-scale corruption in Vietnam. In general, 22.9% of operations in Vietnam pay bribes during the registration period, and 34.6% pay bribes when trying to secure government procurement contracts. Not enough foreign firms compete for government procurement to obtain a clear estimate of their complicity in grand corruption, but it is clear that the proportion of foreign firms paying bribes at registration is slightly less than for domestic firms, although this result is not statistically significant. Delving further into the individual level analysis, we find that the US Bilateral Trade Agreement (US-BTA) led to a significant (28%) reduction in bribes paid at registration, but its impact was most prominently felt by foreign invested enterprises (FIEs).

In this paper, we have sought to enhance the literature linking foreign capital flows to changes in corruption by addressing the major methodological shortcoming in the literature: measurement error in corruption, which is significantly correlated with the independent variables under investigation. We suggest that previous findings linking FDI to corruption are hard to interpret, as the merits often attributed to FDI may simply results from the fact that FDI is attracted to the same types of institutions that produce lower levels of perceived corruption. Using the UCT technique, we present the first empirical findings of this relationship that are divorced of such spurious correlation. In addition, our empirical design employs both foreign and domestic firms to address whether FDI has an independent effect on corruption or simply adjusts to local norms and bribe schedules. Our findings demonstrate conclusively that FIEs are no more likely to pay bribes when registering their operations or competing for government contracts than domestic firms, and are actually marginally less likely to do so. Rather than the influence of FDI inflows themselves, we find that the strongest determinant of corruption is actually found in the role the US-BTA played in altering domestic legislation and reducing opportunities for corruption when dealing with foreign firms. The fact that the US-BTA had a particularly pronounced effect on FIEs, but not on domestic operations is a useful indication that it was the trade agreement and not other domestic reforms that reduced bribes at registration. We also find that certain types of domestic reforms, such as registration within industrial zones, can reduce bribery among foreign investors. In addition to these stimulating results, our analysis also supports conventional wisdom by showing bribes are much more concentrated among firms with thick capital portfolios and much less concentrated among firms who employee more workers. There is one major caveat to our findings. Our measure of corruption only captures the act of corruption, but does not capture the size of the actual bribes. This means that, although we can confidently say that foreign invested firms are no more likely to pay bribes than domestic counterparts, we cannot say anything about the consequences of foreign bribes versus domestic bribes. By approaching our dependent variable, corruption, as a quantifiable activity we are to some extent agnostic as to the scale of that activity. While this approach prevents us from differentiating between the economic gravity of FDI related bribes from that of domestic bribes, it does not prevent us from estimating how these two types of investment impact rates of corruption. Future innovations in our design may offer opportunities for assessing differences in the size of bribes and their economic consequences, but in this study we are limited to analyzing only rates of corruption. To mitigate this limitation, our theoretical conceptualization assumes that bribe rates and bribe sizes are independent of one another, meaning that even if bribe sizes for foreign firms are greater/smaller than for domestic peers, this variation is not associated with the corresponding bribe rates being greater/smaller. This assumption is informed by a large literature on corruption that subsumes individual acts of corruption within a “corruption market” (Kreps, 1997 and Shleifer and Vishny, 1993). Under the market hypothesis, the size and rates of bribing are independently parameterized by supply and demand. Therefore we should not expect that the size of bribes to affect bribe rate, nor vice versa. If, indeed, foreign bribes are much larger than domestic ones, then surely our findings do not paint a complete picture. However, our analytical approach and the core assumption that informs our conclusion are both well supported by economic theory and lend confidence to these preliminary results. Our findings are less conclusive for government procurement. While we can definitely rule out the corrupting influence of foreign capital flows, most other determinants of corruption also prove insignificant. The only covariates which proved significant were labor size and procurement in the agricultural sector. Future work will be necessary to tease out the interaction between these factors and international capital flows definitively.