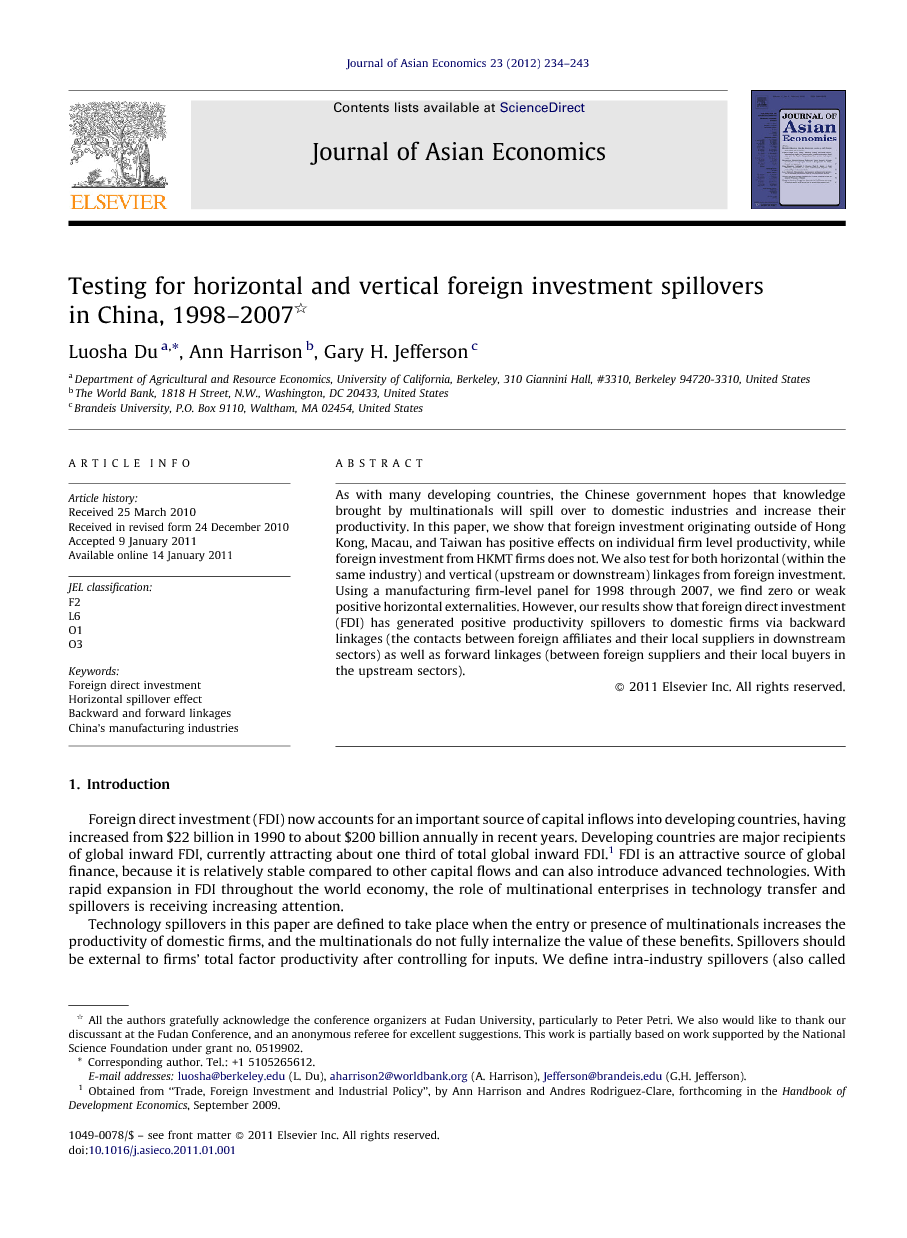 As with many developing countries, the Chinese government hopes that knowledge brought by multinationals will spill over to domestic industries and increase their productivity. In this paper, we show that foreign investment originating outside of Hong Kong, Macau, and Taiwan has positive effects on individual firm level productivity, while foreign investment from HKMT firms does not. We also test for both horizontal (within the same industry) and vertical (upstream or downstream) linkages from foreign investment. Using a manufacturing firm-level panel for 1998 through 2007, we find zero or weak positive horizontal externalities. However, our results show that foreign direct investment (FDI) has generated positive productivity spillovers to domestic firms via backward linkages (the contacts between foreign affiliates and their local suppliers in downstream sectors) as well as forward linkages (between foreign suppliers and their local buyers in the upstream sectors).

Foreign direct investment (FDI) now accounts for an important source of capital inflows into developing countries, having increased from $22 billion in 1990 to about $200 billion annually in recent years. Developing countries are major recipients of global inward FDI, currently attracting about one third of total global inward FDI.1 FDI is an attractive source of global finance, because it is relatively stable compared to other capital flows and can also introduce advanced technologies. With rapid expansion in FDI throughout the world economy, the role of multinational enterprises in technology transfer and spillovers is receiving increasing attention. Technology spillovers in this paper are defined to take place when the entry or presence of multinationals increases the productivity of domestic firms, and the multinationals do not fully internalize the value of these benefits. Spillovers should be external to firms’ total factor productivity after controlling for inputs. We define intra-industry spillovers (also called horizontal spillovers) to occur when domestic firms are affected by foreign corporations located in the same sector, while inter-industry spillovers (vertical spillovers) occur when foreign investors enhance the productivity of domestic firms through vertical linkages. Vertical linkages are possible through both backward linkages (between foreign affiliates and their local suppliers) and forward linkages (between foreign suppliers and their local buyers). There have been a number of recent papers that test for either horizontal or vertical linkages (see, for example Aitken and Harrison (1999), Hu and Jefferson (2002), Javorcik (2004), and Lin, Liu, and Zhang (2009)). Most of this literature finds mixed evidence on horizontal spillovers, with a number of authors even documenting negative spillovers. In this paper, we confirm that horizontal spillovers are not significant in Chinese manufacturing, suggesting that competition from foreign-owned firms in the same sector has neither strong positive nor negative effects on domestic plant productivity. In contrast, recent studies generally find support for positive vertical spillovers from downstream foreign firms to upstream suppliers (so-called backward linkages). In this paper, we find evidence of vertical linkages via both forward and backward channels. Since opening its economy to the outside world in late 1978, China has absorbed an increasing amount of FDI. It is now among the world's largest hosts of FDI inflows. With the entry of China into the World Trade Organization, China's economy is becoming increasingly open to foreign investors. Potential positive spillover effects are indeed the main rationale behind the Chinese government's aggressive efforts over the past two decades to attract foreign investment to China (Hu & Jefferson, 2002). However, few studies estimate the impact of FDI spillovers on China's economy. Hu and Jefferson (2002) are the first authors to use firm-level data to study horizontal FDI spillovers in China. They find that FDI reduces productivity and market share of domestic firms in the short run. One recent manuscript that investigates both horizontal and vertical FDI spillovers in China is Lin et al. (2009). In contrast to Javorcik (2004), they find bigger forward and smaller backward spillovers. Our results differ from theirs, in part because we focus on total factor productivity and they examine value-added productivity and also use a different estimation method. We use an approach to productivity measurement pioneered by Olley and Pakes (1996). This leads to bigger backward linkages and smaller forward linkages. Our empirical strategy follows Javorcik (2004) and Olley and Pakes (1996). First, we use Javorcik (2004)’s empirical strategies to calculate Backward and Forward linkages and follow her estimation models to test whether there are vertical FDI spillovers in the manufacturing sector in China, and if so, through what mechanism these spillovers occur. By using a rich set of data collected by the Chinese National Statistical Bureau from its annual survey of industrial firms with annual sales of more than five million yuan, 2 we find that positive and significant vertical spillovers occurred through both backward and forward linkages. These results are consistent with the small set of case studies on vertical externalities from foreign investment on other countries: all previous research outside of China finds that vertical linkages operated through downstream linkages between domestic suppliers and foreign users of their inputs. We address the endogeneity of inputs by applying the strategy proposed by Olley and Pakes (1996). To address the potential problem of sector-level FDI variables and domestic plant productivity being jointly determined, we also explore the robustness of our results to using lagged measures of foreign investment at the sector level. We apply a variety of specifications to take into account firm-specific fixed effects, and find that our results are robust to these alternative approaches. The results indicate significant heterogeneity across firms in responding to foreign investment. Specifically, we find that the sources of foreign investment matter. Firms with equity participation from other foreign sources, principally the OECD economies, show positive effects on individual firm level productivity; while foreign investment from Hong Kong, Macao or Taiwan does not. The rest of paper is organized into five further sections. Section 2 summarizes previous empirical and theoretical work in this field. In Section 3, we describe the data used in this paper and review broad trends for the 1998 through 2007 period. Section 4 lays out the empirical strategy, discusses the econometric issues, and presents the empirical results. Section 5 concludes.

Given the intensive interest in FDI as a vehicle through which developing countries learn about new technology, many firm-level studies have investigated the presence of FDI spillovers. However, due to the lack of accessibility of firm-level data, few studies test for FDI spillovers in China. This paper, based on a rich firm-level dataset from China, tests particularly for vertical spillovers from FDI by applying the approaches of Javorcik (2004) and Olley and Pakes (1996). Taking into account the heterogeneity of firms’ absorptive capacities, we show that foreign investment originates principally from OECD sources (outside of Hong Kong, Macao, and Taiwan) has positive impacts on individual firm-level productivity. Across a variety of specifications, and controlling for firm and year effects, we find that positive productivity spillovers from FDI take place between foreign affiliates and their local clients in upstream sectors (backward linkages) and that there are also positive productivity spillovers from foreign suppliers to their domestic buyers (forward linkages). We also highlight the different effects played by the source of the foreign equity investment on domestic firm productivity. While foreign equity participation is generally associated with higher productivity at the firm level, this is not the case for foreign equity participation that originates in Hong Kong, Macao, or Taiwan. There are several possible explanations for this. One major reason could be that such investments actually originate in China, and are simply rechanneled through nearby locations to take advantage of special incentives offered to foreign investors. Another possible explanation is that nearby foreign investors are not sufficiently different technologically. Certainly more research is needed to fully understand the effect of FDI on host countries. In the case of China, the uniqueness of that country's geography, institutions, and market conditions argue for differentiating our research strategy to address these special characteristics. Our research has done that in distinguishing between the firm-level productivity effects of investment originating from Hong Kong, Macao, and Taiwan versus that which originate primarily in OECD countries. In addition, more attention should be given to different spillover dynamics that operate in different regions of China in which local institutions and policies, the concentration and composition of FDI, and proximity to other contiguous or near-contiguous economies differ markedly. Thus, it will be more interesting if we can perform some disaggregated studies to calculate spillover effects in specific regions or sectors. Additional research exploring the role of trade policies and heterogeneity across ownership types would also be or particular interest.