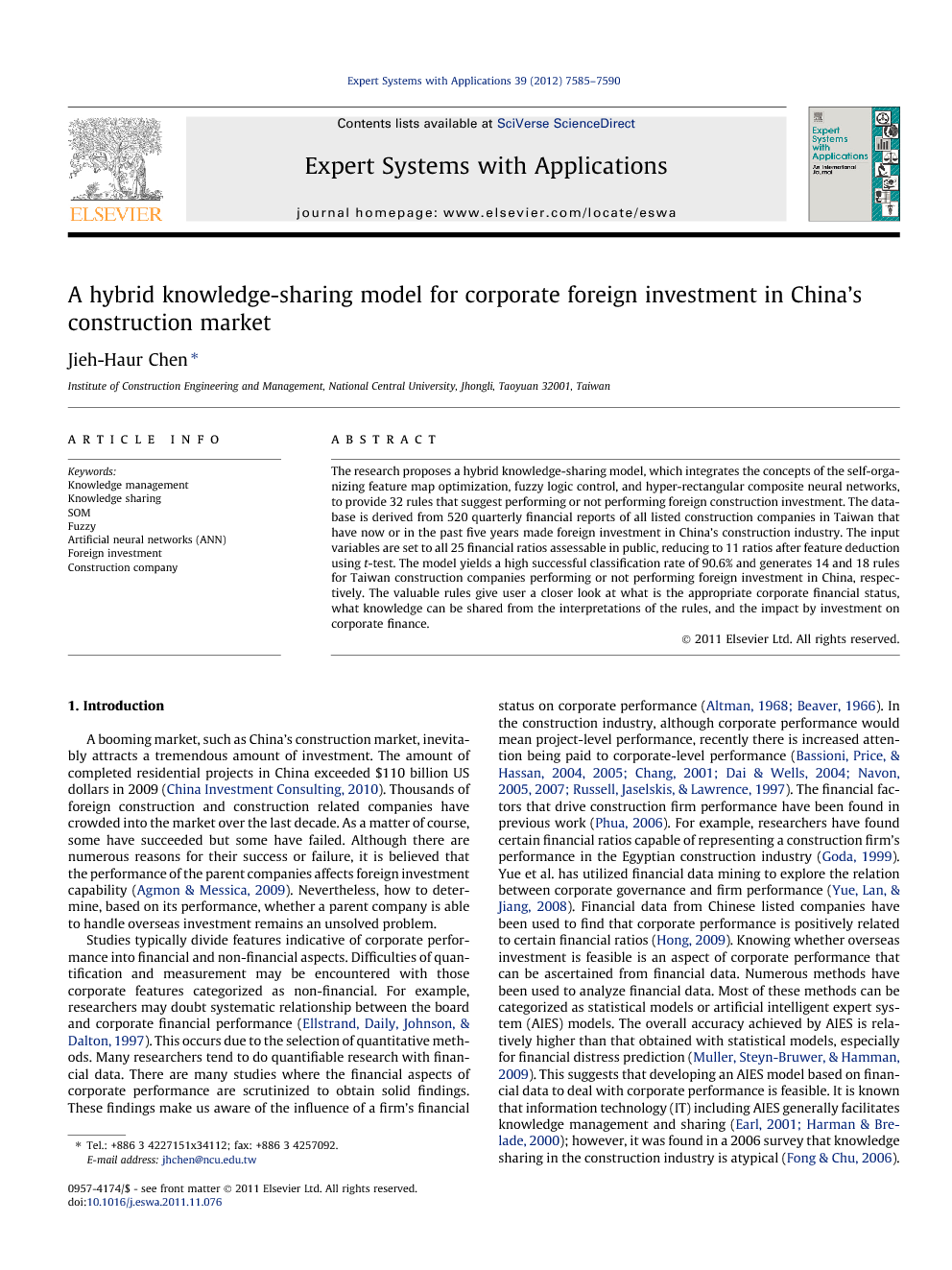 The research proposes a hybrid knowledge-sharing model, which integrates the concepts of the self-organizing feature map optimization, fuzzy logic control, and hyper-rectangular composite neural networks, to provide 32 rules that suggest performing or not performing foreign construction investment. The database is derived from 520 quarterly financial reports of all listed construction companies in Taiwan that have now or in the past five years made foreign investment in China’s construction industry. The input variables are set to all 25 financial ratios assessable in public, reducing to 11 ratios after feature deduction using t-test. The model yields a high successful classification rate of 90.6% and generates 14 and 18 rules for Taiwan construction companies performing or not performing foreign investment in China, respectively. The valuable rules give user a closer look at what is the appropriate corporate financial status, what knowledge can be shared from the interpretations of the rules, and the impact by investment on corporate finance.

A booming market, such as China’s construction market, inevitably attracts a tremendous amount of investment. The amount of completed residential projects in China exceeded $110 billion US dollars in 2009 (China Investment Consulting, 2010). Thousands of foreign construction and construction related companies have crowded into the market over the last decade. As a matter of course, some have succeeded but some have failed. Although there are numerous reasons for their success or failure, it is believed that the performance of the parent companies affects foreign investment capability (Agmon & Messica, 2009). Nevertheless, how to determine, based on its performance, whether a parent company is able to handle overseas investment remains an unsolved problem. Studies typically divide features indicative of corporate performance into financial and non-financial aspects. Difficulties of quantification and measurement may be encountered with those corporate features categorized as non-financial. For example, researchers may doubt systematic relationship between the board and corporate financial performance (Ellstrand, Daily, Johnson, & Dalton, 1997). This occurs due to the selection of quantitative methods. Many researchers tend to do quantifiable research with financial data. There are many studies where the financial aspects of corporate performance are scrutinized to obtain solid findings. These findings make us aware of the influence of a firm’s financial status on corporate performance (Altman, 1968 and Beaver, 1966). In the construction industry, although corporate performance would mean project-level performance, recently there is increased attention being paid to corporate-level performance (Bassioni et al., 2004, Bassioni et al., 2005, Chang, 2001, Dai and Wells, 2004, Navon, 2005, Navon, 2007 and Russell et al., 1997). The financial factors that drive construction firm performance have been found in previous work (Phua, 2006). For example, researchers have found certain financial ratios capable of representing a construction firm’s performance in the Egyptian construction industry (Goda, 1999). Yue et al. has utilized financial data mining to explore the relation between corporate governance and firm performance (Yue, Lan, & Jiang, 2008). Financial data from Chinese listed companies have been used to find that corporate performance is positively related to certain financial ratios (Hong, 2009). Knowing whether overseas investment is feasible is an aspect of corporate performance that can be ascertained from financial data. Numerous methods have been used to analyze financial data. Most of these methods can be categorized as statistical models or artificial intelligent expert system (AIES) models. The overall accuracy achieved by AIES is relatively higher than that obtained with statistical models, especially for financial distress prediction (Muller, Steyn-Bruwer, & Hamman, 2009). This suggests that developing an AIES model based on financial data to deal with corporate performance is feasible. It is known that information technology (IT) including AIES generally facilitates knowledge management and sharing (Earl, 2001 and Harman and Brelade, 2000); however, it was found in a 2006 survey that knowledge sharing in the construction industry is atypical (Fong & Chu, 2006). To deal with these problems, this research proposes a hybrid model, which integrates the concepts of Self-organizing feature map optimization, Fuzzy logic control, and hyper-rectangular composite Neural Networks (SFNN) to provide rules that suggest performing or not performing foreign construction investment. The research only considers the corporate capability of conducting foreign construction investment in China, not including how successful the investment performs. Since the computation of financial ratios requires at least 5 consecutive years of accounting data, the research targets are those listed construction companies in Taiwan, which have conducted construction related investment in Mainland China for the last five years (2005–2009). Due to the accessibility of data, the targeted financial ratios are those revealed in the quarterly financial reports published in the Taiwan Economic Journal (TEJ). The following 25 published financial ratios are included: profit margin, return on assets, after-tax rate of return, operating profit to paid-in capital ratio, pre-tax net profit to paid-in capital ratio, earnings per share, operating margin, operating profit, growth rate, after-tax net profit growth rate, revenue growth rate, growth rate of total assets, growth in the total return on assets, equity ratio, debt to assets ratio, long-term funds to fixed assets ratio, dependence on borrowing, inventory turnover ratio, receivable turnover ratio, total assets turnover ratio, fixed assets turnover ratio, net worth turnover ratio, current ratio, acid-test ratio and times interest earned ratio.

This study notes a lack of shared knowledge for foreign investment in the construction industries. The proposed model is an alternative solution for those who intend to perform foreign investment in China. Starting with a comprehensive literature review on corporate investment and knowledge sharing in construction, the study collects data from a well-defined database for 26 out of a total of 42 construction companies that have invested in construction related business in the construction market of China. A total of 520 quarterly financial reports are collected, containing data on 15 financial ratios from which construct the model database. 4 out of 15 ratios are removed leaving 11 ratios set as the input variables. The proposed model, the so-called SFNN, integrates the concepts of SOMO, Fuzzy, and HRCNN to deal with classification and to provide rules. There are 14 and 18 extracted rules for construction companies performing or not performing foreign investment, respectively. Comparison between these rules using the SFNN model assists in sharing knowledge of past practical investment in China’s construction market. Further examining of examples for the two most significant rules demonstrates the benefits for practitioners. This work makes use of the SFNN approach to cope with knowledge sharing related to foreign investment in construction. The effective performance of this approach means that it could be successful to solve other pattern classification problems in the construction industry. Nonetheless, there exists potential for succeeding work. Data used in the research are limited to the companies in the Taiwan construction industry. A full-scale survey of all industries in Taiwan or other countries would enhance applicability of the model. In addition, data accessibility is the main consideration in data collection. More financial features may improve knowledge sharing and benefit users, but would cost massive amounts of time and efforts. In this study, the model reaches a high successful classification rate of 90.6%; as such, the model algorithms always have room for improvement. Such enhancements may lie in selection or development of new algorithms, modification of the existing algorithms to avoid possible local optimization, and reconstruction of the classifier mechanism.