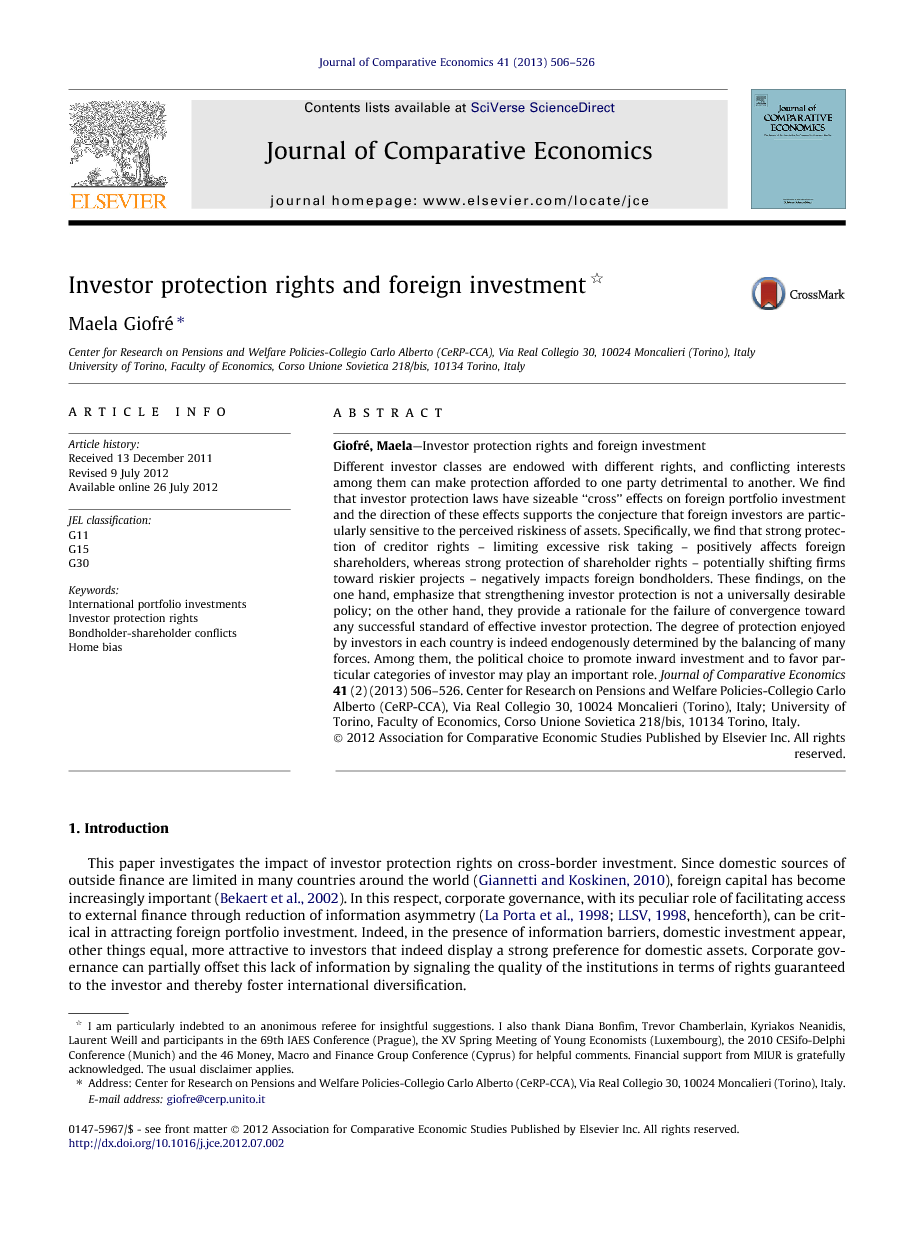 Different investor classes are endowed with different rights, and conflicting interests among them can make protection afforded to one party detrimental to another. We find that investor protection laws have sizeable “cross” effects on foreign portfolio investment and the direction of these effects supports the conjecture that foreign investors are particularly sensitive to the perceived riskiness of assets. Specifically, we find that strong protection of creditor rights – limiting excessive risk taking – positively affects foreign shareholders, whereas strong protection of shareholder rights – potentially shifting firms toward riskier projects – negatively impacts foreign bondholders. These findings, on the one hand, emphasize that strengthening investor protection is not a universally desirable policy; on the other hand, they provide a rationale for the failure of convergence toward any successful standard of effective investor protection. The degree of protection enjoyed by investors in each country is indeed endogenously determined by the balancing of many forces. Among them, the political choice to promote inward investment and to favor particular categories of investor may play an important role.

We investigate the impact of investor protection laws on foreign investment, namely foreign equity portfolio investments and foreign bond portfolio investments. Our results show, first, that investor protection laws have a significant impact on foreign investments. These findings are consistent with results in Leuz et al. (2009) relative to outward equity investment by US firms. We generalize their results to different investing countries and to debt securities. Specifically, we find that strong shareholder rights (creditor rights) stimulate foreign equity (bond) portfolio investments. Since foreign investors are mostly affected by information asymmetry issues, these findings can also be interpreted as corporate governance rules serving as a means to overcome information asymmetries and thereby to enhance international diversification. Secondly, our findings highlight how investor protection asymmetrically affects foreign investment. These results, obtained controlling for relevant dimensions of countries’ institutional quality, represent the most innovative contribution of the paper to the extant literature. More specifically, we highlight that foreign shareholders appreciate strong creditor rights, which potentially mitigate the riskiness of projects, while bondholders are negatively affected by strong shareholder rights, which might induce the firm to engage in excessively risky behavior. Importantly, our results are robust to an updated specification of shareholder rights and reveal that the negative cross-effect on foreign bondholders can be plausibly ascribed to antitakeover legislation asymmetrically influencing inward bond and stock investment. The immediate implication to draw from this picture is that strengthening investor protection is not a universally desirable policy. Specifically, our results suggest that stronger creditor rights are helpful in attracting foreign investment, while stronger shareholder rights are effective in attracting foreign equity investment but may deter foreign bond investment in equal measure. Thus, the choice to reinforce shareholder rights can be read as a choice to benefit foreign shareholders to the detriment of foreign bondholders. It is worth stressing now that our work investigates the effects of investor protection rights on cross-border investments, while a more comprehensive analysis is needed to derive general welfare conclusions on the desirability of stronger or weaker investor protection. Moreover, we consider the determinants of foreign investments, leaving unexplored effects on domestic investors that are harder to investigate due to both the limited number of available observations (one for each investing country for each available year) and to difficulties in removing all sources of familiarity bias. With the above-mentioned caveats in mind, our findings also contribute to the literature on convergence in investor protection legislation. A large body of literature comparing financial systems, especially among capitalist economies, has produced a renewed interest in institutional economics (Djankov et al., 2003).48 On the one hand, the classical distinction between bank-based and market-based systems is less relevant than in the past (Rajan and Zingales, 2003 and Hlzl, 2006), on the other hand, domestic financial markets remain heterogeneous despite integration and globalization.49Djankov et al. (2008) find no convergence in creditor scores. La Porta et al. (2000) reject the hypothesis of legal convergence of rules and enforcement mechanisms toward some successful standard of effective investor protection. Mansi et al. (2009) claim that competition on legal dimensions in terms of their effectiveness in attracting investment does not imply that all jurisdictions need to or should converge to the single best or worst alternative. Consistently, our findings provide a rationale for the evidence of no convergence toward the strongest investor protection setting as the level of investor protection in each country is endogenously determined by the balancing of many forces. Among them, the political choice to promote inward investment and to favor particular categories of investor may play an especially important role.