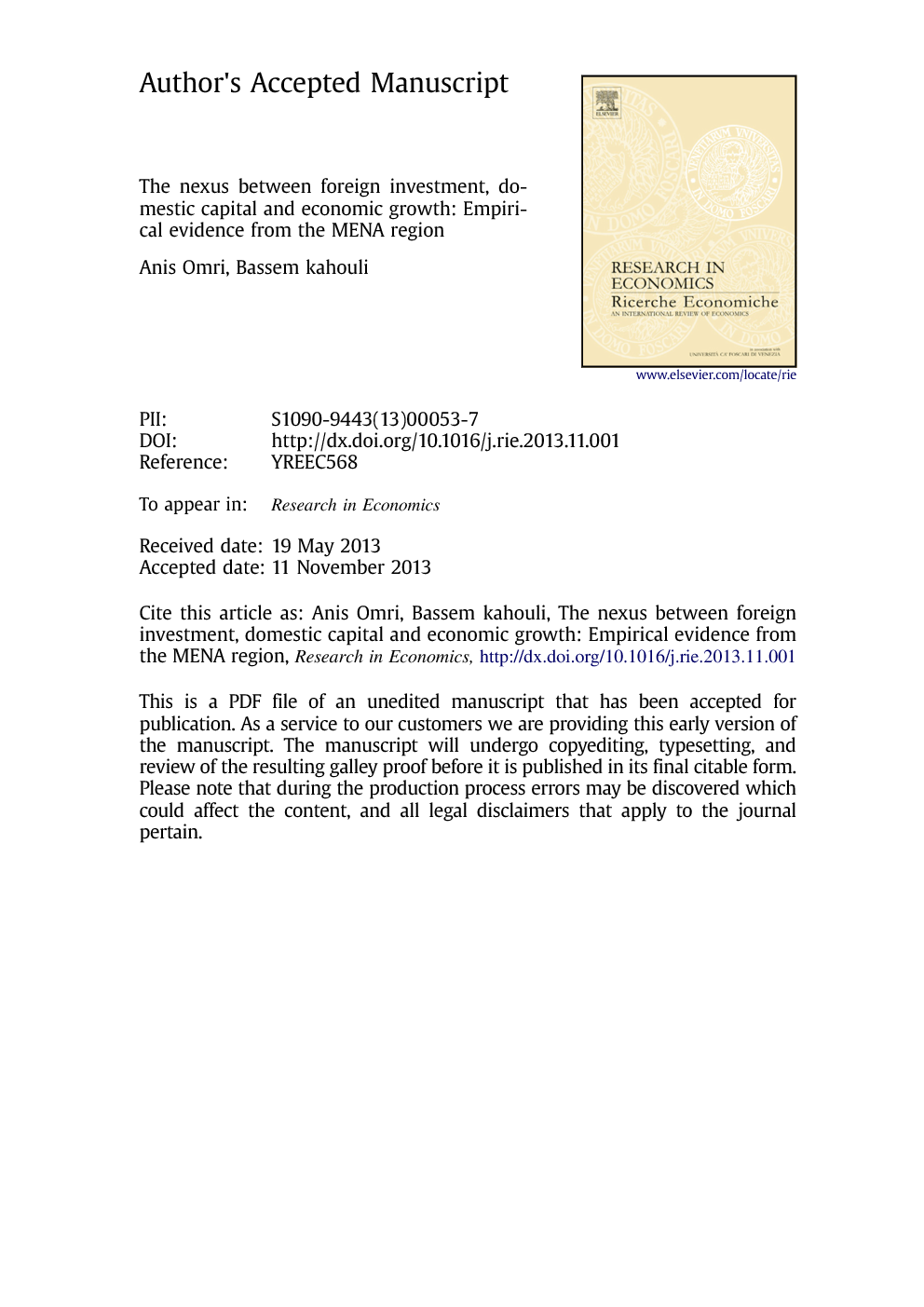 While the literature on the causality links between domestic capital, FDI and economic growth for individual countries and for panels of countries has increased over the last few years, there is no study that examines this interrelationship using a growth framework and simultaneous equations models. The objective of the present work is to fill this research gap by examining the above interaction for 13 MENA countries over the period 1990–2010. Our analysis suggests that (i) there is bi-directional causal relationship between foreign investment and economic growth; (ii) there is uni-directional causal relationship from foreign investment to domestic capital; and (iii) there is bi-directional causal relationship between domestic capital and economic growth for the region as a whole. We find also that there is an indirect effect of financial development in MENA region on economic growth via the stock of domestic capital, i.e., the financial development significantly affects their stock of national capital which contributes to economic growth. Therefore, an increase in the stock of human capital promotes economic growth but growth in the government expenditure reduces economic growth and its effect on the stock of domestic capital is also negative. The foreign direct investment is contributing to the growth of the domestic capital stock but growth in the domestic capital stock does not significantly contribute to the stock of FDI in MENA region. Finally, the degree of openness and the real exchange rate produce a significant impact on the stock of foreign direct investment in MENA region. This result supports the idea that openness policy through the abolition of trade barriers and free movement of capital flows is a source of FDI attractiveness From the results presented in this paper, it can be argued that (i) the MENA countries should orient its economic policies to changes and improve the government consumption and the stock of human capital to support a sustainable economic growth because increased spending on advanced education and training contributes to economic growth by easing the adoption of foreign technologies; (ii) governments are unable to take full advantage of foreign direct investment inflows because: their financial market is insufficiently developed, the spending on education is insufficient, and technology gap between the foreign and domestic firms is too large. Therefore, governments must improve political stability, law and order, socioeconomic conditions and the investment profile and must reduce the level of corruption to attract more FDI and domestic investment because the generated value added in many sectors and reduced unemployment rate; (iii) the financial sector should provide sufficient resources by creating new instruments, institutions and organizations for the demand of real sector with the economic growth leads development of the financial sector; (iv) more prudent policies might involve removing barriers that prevent local firms from establishing adequate linkages, improving local firms' access to inputs, technology, and financing, and streamlining the procedures associated with selling inputs. But we might also seek to improve domestic conditions, which should have the dual effect of attracting foreign investment (Alfaro et al., 2006) and enabling host economies to maximize the benefits of such foreign investment.