عنوان انگلیسی
Birds of a feather: Evidence on commonality of corruption and democracy in the origin and location of foreign investment in Russian regions
دانلود فوری مقاله + سفارش ترجمه 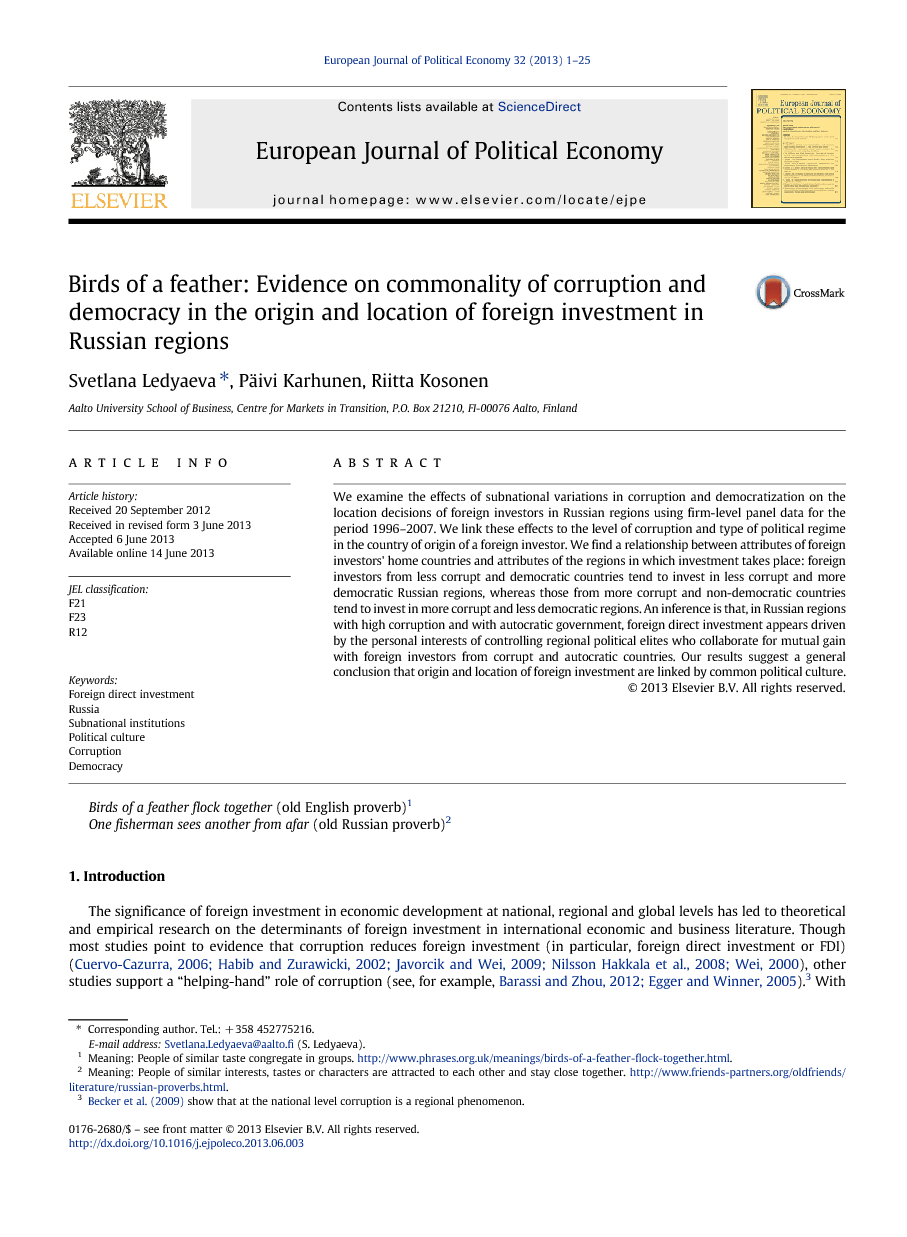 The significance of foreign investment in economic development at national, regional and global levels has led to theoretical and empirical research on the determinants of foreign investment in international economic and business literature. Though most studies point to evidence that corruption reduces foreign investment (in particular, foreign direct investment or FDI) (Cuervo-Cazurra, 2006, Habib and Zurawicki, 2002, Javorcik and Wei, 2009, Nilsson Hakkala et al., 2008 and Wei, 2000), other studies support a “helping-hand” role of corruption (see, for example, Barassi and Zhou, 2012 and Egger and Winner, 2005).3 With regard to political institutions, while the majority of existing empirical studies find that, in general, more democratic countries attract more foreign capital (see Asiedu and Lien, 2011, Biswas, 2002, Busse, 2004, Harms and Ursprung, 2002, Jakobsen and de Soysa, 2006, Jensen, 2003, Madhu, 2009 and Schulz, 2009), there is also evidence to suggest that multinational companies (MNCs) may find autocratic government attractive (see, for example, Oneal, 1988 and Oneal, 1994). Although there is a large amount of research on the impact of host-country corruption and the type of political regime on inward FDI, to the best of our knowledge, no previous empirical study has investigated the effects of subnational corruption and democracy development on the distribution of FDI within a single country. In this study we examine how subnational variations in corruption and democratization in the Russian regions affect the location decisions of foreign investors. We further study how the sensitivity of foreign investors' location decisions to the levels of corruption and democracy in the host regions depends on the level of corruption and the types of political regimes in investors' home countries. Our empirical analysis is based on a sample of 2263 firms with foreign ownership that were registered in Russia during the period 1996–2007. The data come from Rosstat — the Russian State Statistical Agency — which is the most reliable data source of economic statistics on Russia. Focusing on a post-communist economy such as Russia is very suitable for our project, because Russia is a highly corrupt country with both autocratic and democratic features to its political regime and also there is diversity in terms of the corrupt practices and levels of political development across its regions. Levin and Satarov (2000, p.122) propose that “regional authorities exhibit the same vigor as in the federal level in using their powers to grant privileges in exchange for bribes”. In 2002, Transparency International (TI) carried out a public opinion survey titled the Corruption Index for Russian Regions, which assessed 40 out of Russia's 89 regions. The survey showed that levels of corruption differ considerably among Russian regions. A number of factors (institutional, social and structural) explain variations in the levels of corruption in the Russian regions (Dininio and Orttung, 2005). Different theoretical approaches (the study of transition, new institutionalism, sociology) can explain subnational variations in democracy development in post-communist countries (for details, see Lankina, 2010). Several studies have created variables measuring democratization in the Russian regions. Marsh (2004) computed an index of democratization for Russian regions based on the data from gubernatorial elections. Nikolai Petrov and Alexey Titkov of the Moscow Carnegie Center have adapted a Freedom House-type measurement for the Russian regions. Researchers at the Independent Institute for Social Policy (Moscow) have computed an index of democracy for Russian regions based on election data (at both federal and regional levels). All the indices confirm vast differences in the levels of democracy in Russia's regions. The link between host-country and home-country corruption and foreign investment has attracted attention only recently (Cuervo-Cazurra, 2006, Wu, 2006 and Aleksynska and Havrylchyk, 2013). In general the conclusion is that investors from less corrupt countries and with strict anti-corruption legislation tend to invest less in highly corrupt countries, whereas investors from highly corrupt countries are undeterred by high levels of corruption in host countries. In this paper we propose and empirically test the hypothesis that less corrupt countries tend to invest in less corrupt Russian regions, whereas more corrupt countries tend to invest in more corrupt regions. Most previous studies investigate the impact of the level of host-country democracy on inward FDI from developed and democratic countries into developing countries and, in general, conclude that this impact is positive. We further connect political institutions and FDI inflows via the interaction between the types of political regimes of the host and home countries (and, hence, government policies) and foreign investors' decisions. In particular, we propose and empirically test the hypothesis that democratic countries tend to invest in more democratic Russian regions, whereas non-democratic countries tend to invest in less democratic regions. The paper is structured as follows: Section 2 discusses theoretical arguments and testable hypotheses. Section 3 describes the research design for the empirical analysis. 4 and 5 present and discuss the empirical results at the regional and firm levels. Section 6 concludes the study.

Utilizing a unique data set of 2263 firms with foreign capital registered in Russia in the period 1996–2007, we have examined the determinants of their location choice in Russian regions. First, we found that in general foreign investors locate their firms in less corrupt Russian regions. This result is mainly due to the predominance of foreign investors from non-corrupt countries in our sample. In particular, there is empirical evidence that regional corruption across Russia is only problematic for investors from transparent home countries that want to invest in Russia. However, investors from corrupt countries tend systematically to invest in more corrupt Russian regions. The latter result is quite robust and is in line with the suggestion that “investors that have been exposed to bribery at home may even seek countries where corruption is prevalent” (Cuervo-Cazurra, 2006, p. 807). Secondly, we found empirical support for a positive association between the level of democratization and the location decisions of foreign investors in Russian regions. However, as in the case with corruption, this result reflects the fact that the majority of FDI in Russia is from democratic countries. Regional democracy is positively associated with the location decisions of foreign investors from democratic countries but there is evidence of a negative relationship between the level of regional democracy and the location decisions of the investors from non-democratic countries. This negative relationship is not robust when studied using alternative measures of regional democratization, an instrumental variables' approach, and when region-specific fixed effects are taken into account. A conclusion suggested by our results is that, in Russian regions with high corruption and autocratic government, foreign direct investment is driven by the personal interests of controlling regional political elites who collaborate with foreign investors from corrupt and autocratic countries. Our results can be interpreted in terms of political culture. Investors locate their investments in regions in which they are familiar with or have experience with the political culture.