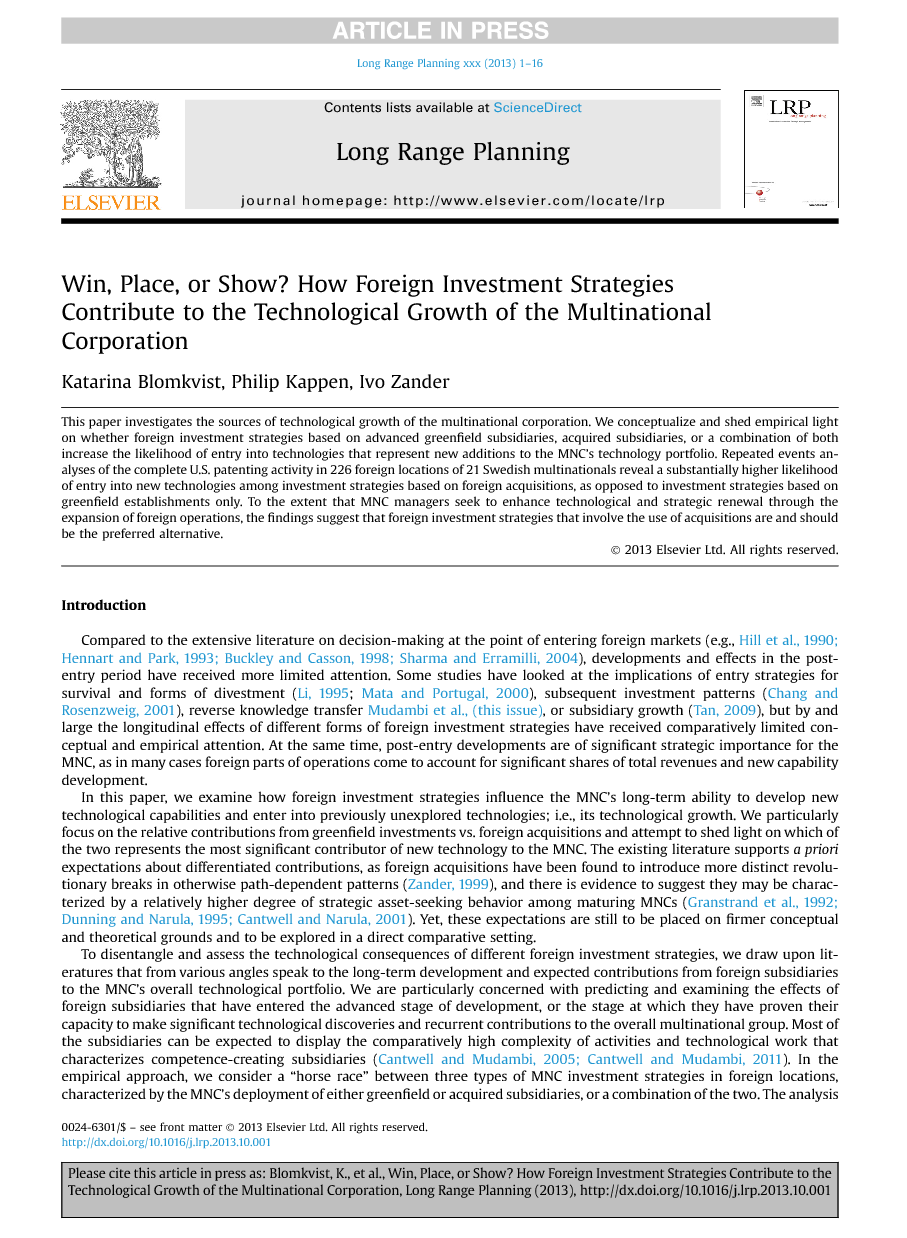 Compared to the extensive literature on decision-making at the point of entering foreign markets (e.g., Hill et al., 1990, Hennart and Park, 1993, Buckley and Casson, 1998 and Sharma and Erramilli, 2004), developments and effects in the post-entry period have received more limited attention. Some studies have looked at the implications of entry strategies for survival and forms of divestment (Li, 1995; Mata and Portugal, 2000), subsequent investment patterns (Chang and Rosenzweig, 2001), reverse knowledge transfer Mudambi et al., (this issue), or subsidiary growth (Tan, 2009), but by and large the longitudinal effects of different forms of foreign investment strategies have received comparatively limited conceptual and empirical attention. At the same time, post-entry developments are of significant strategic importance for the MNC, as in many cases foreign parts of operations come to account for significant shares of total revenues and new capability development. In this paper, we examine how foreign investment strategies influence the MNC's long-term ability to develop new technological capabilities and enter into previously unexplored technologies; i.e., its technological growth. We particularly focus on the relative contributions from greenfield investments vs. foreign acquisitions and attempt to shed light on which of the two represents the most significant contributor of new technology to the MNC. The existing literature supports a priori expectations about differentiated contributions, as foreign acquisitions have been found to introduce more distinct revolutionary breaks in otherwise path-dependent patterns ( Zander, 1999), and there is evidence to suggest they may be characterized by a relatively higher degree of strategic asset-seeking behavior among maturing MNCs ( Granstrand et al., 1992, Dunning and Narula, 1995 and Cantwell and Narula, 2001). Yet, these expectations are still to be placed on firmer conceptual and theoretical grounds and to be explored in a direct comparative setting. To disentangle and assess the technological consequences of different foreign investment strategies, we draw upon literatures that from various angles speak to the long-term development and expected contributions from foreign subsidiaries to the MNC's overall technological portfolio. We are particularly concerned with predicting and examining the effects of foreign subsidiaries that have entered the advanced stage of development, or the stage at which they have proven their capacity to make significant technological discoveries and recurrent contributions to the overall multinational group. Most of the subsidiaries can be expected to display the comparatively high complexity of activities and technological work that characterizes competence-creating subsidiaries (Cantwell and Mudambi, 2005 and Cantwell and Mudambi, 2011). In the empirical approach, we consider a “horse race” between three types of MNC investment strategies in foreign locations, characterized by the MNC's deployment of either greenfield or acquired subsidiaries, or a combination of the two. The analysis of three hypotheses aims at uncovering which type of investment strategy has a particularly pronounced effect on the pace of entry into technologies that represent new additions to the MNC's overall technology portfolio. For the empirical investigation, we draw on a data set containing the complete U.S. patenting by subsidiaries in 226 foreign locations of 21 Swedish multinationals in the 1893–2008 period. From this data, we estimate the hazard rates for successive entries into new technologies for each of the possible investment strategies, controlling for a set of additional variables internal and external to the MNC. The results show that there are substantially different probabilities of advanced subsidiaries' contribution to MNC technological growth. Specifically, investment strategies involving acquisitions are significantly more likely to contribute to the technological growth of the MNC than those depending only on greenfield subsidiaries. The paper makes two main contributions to the literature on post-entry effects of foreign market investment strategies. We conceptually disentangle and predict the development of technological contributions from advanced subsidiaries of the MNC, and, in contrast to prior work which addresses only greenfield subsidiaries (Blomkvist et al., 2010) or the dynamics of competence-creating overlaps (Kappen, 2011), make a direct empirical comparison between greenfields and acquisitions with regard to their ability to contribute to the technological growth of the entire multinational group. In addition to contributing new theoretical and empirical knowledge about post-entry developments in the internationalization of the MNC, the empirical findings offer some overall guidance for managers concerned with the growth and long-term strategy of the international firm. Specifically, if technological growth through operations in foreign locations is seen as desirable, the findings suggest that, in the choice between greenfield investments and acquisitions, investment strategies based on acquisitions should be the preferred and encouraged form of international expansion.