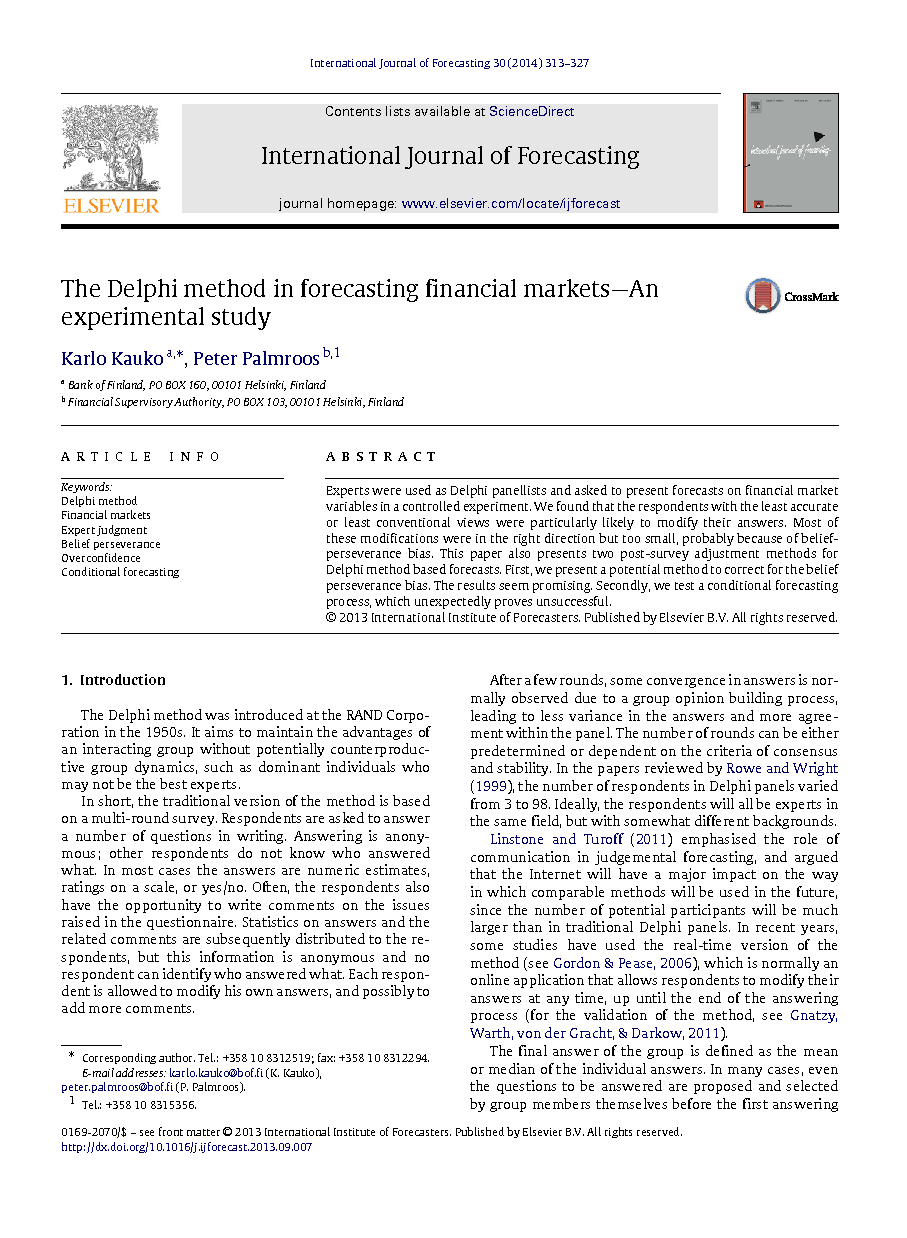 Experts were used as Delphi panellists and asked to present forecasts on financial market variables in a controlled experiment. We found that the respondents with the least accurate or least conventional views were particularly likely to modify their answers. Most of these modifications were in the right direction but too small, probably because of belief-perseverance bias. This paper also presents two post-survey adjustment methods for Delphi method based forecasts. First, we present a potential method to correct for the belief perseverance bias. The results seem promising. Secondly, we test a conditional forecasting process, which unexpectedly proves unsuccessful.

This paper presents the findings from a controlled forecasting experiment. Expert groups were asked to make quantitative forecasts for different variables related to Finnish financial markets. The Delphi method was tested and the results were compared with the performance of a Face-to-Face meeting of a reference group. The forecasting horizon was relatively short, only a few months. The Delphi method and FTF meeting seemed to be roughly equally reliable. In preliminary calculations (which are not presented in detail), both methods clearly outperformed simple trend extrapolations based on the assumption that the growth rates observed in the past will continue in the future. Because the Delphi respondents used pseudonyms when answering, we were able to see how the answers of individual respondents changed from round to round, even though their responses were essentially anonymous. The accuracy of individual answers tended to improve during the process, and the improvements tended to be substantial if the initial forecast was either remarkably imprecise or not in line with the rest of the group. In most cases, the respondents changed their answers in the right direction but by too little. Experimental results, such as those of Brockhoff et al. (1975) and Graefe and Armstrong (2011), and the findings presented above, indicate that the Delphi method as such may not be significantly more reliable than FTF meetings. However, structured processes have one major advantage. When there are large numbers of individual answers from different rounds, it is easier to apply objectively testable techniques to correct for known cognitive biases. The output from a traditional FTF meeting consists of one answer per question, which provides much less data for use as inputs to post-hoc calculations. Two potential ways of improving the forecasting accuracy were tested. First, we tried to eliminate the belief perseverance bias reported by psychologists. This was only possible with the Delphi method. Each individual answer was moved further in the direction which it had already been moved by the respondent. These corrections led to significant improvements in the forecasts. However, further research and experimentation is needed before we can say how general this result is and how stable the optimal parametrisation is. Second, the respondents were asked to evaluate how their answers would depend on the 12-month money market rate. Using this estimated interest rate-sensitivity, the forecasts were adjusted post hoc according to the difference between the forecasted interest rate and the outcome. Perhaps surprisingly, this experiment failed, suggesting that knowing the interest rate outcome many months in advance would not have helped the respondents to make accurate forecasts of other variables. Attempts at improving judgemental forecasting processes should take maximal advantage of the findings reported in the psychological literature. By definition, judgemental forecasting is based on the workings of the human mind, and is known to be affected by cognitive biases. Indeed, it is difficult to see why being a Delphi panellist would render one immune to psychological phenomena. Delphi panels in real-world forecasting tasks often consist of experts, and, perhaps paradoxically, experts seem to be affected more than laymen by belief perseverance bias at least; they are less likely to change their original answers (Hussler et al., 2011). An obvious candidate for a future forecasting exercise is the subadditivity effect, the tendency to misperceive the probability of an event as being less than the sum of the probabilities of two mutually exclusive versions of the event (see Tversky & Koehler, 1994). Taking such cognitive biases into account in the interpretation and processing of survey results would seem to be a promising area for future research.