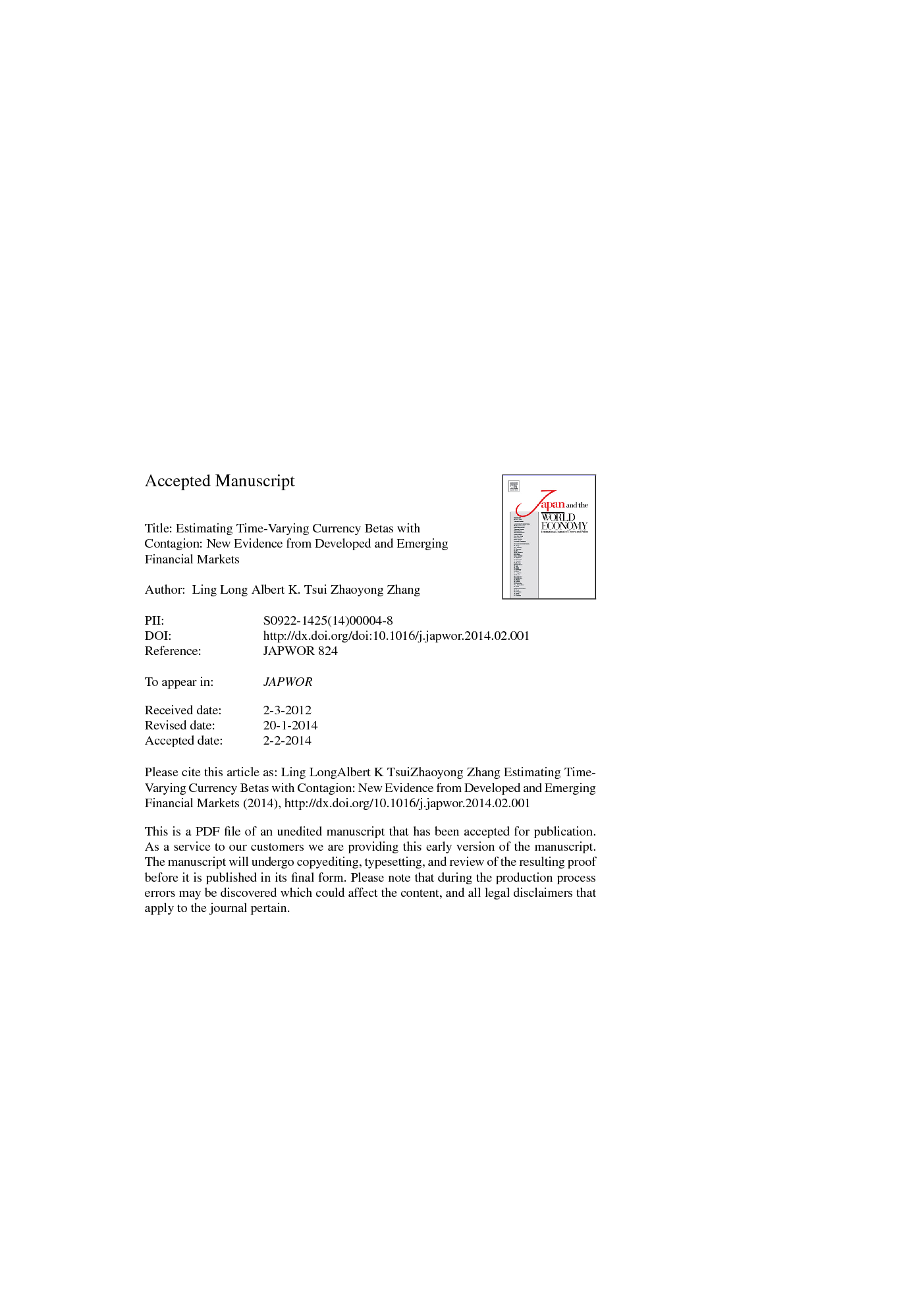 This paper examines the conditional time-varying currency betas from five developed and six emerging financial markets with contagion and spillover effects. We employ a trivariate asymmetric BEKK-type GARCH-in-Mean (MGARCH-M) approach to estimate the time-varying conditional variance and covariance of returns of stock market index, the world market portfolio and bilateral exchange rate between the US dollar and the local currency. The results show that the world market and currency risks are not only priced in the stock markets, but also time-varying. It is found that currency betas are much more volatile than the world market betas, and currency betas in the emerging markets are more volatile than those in the developed markets. We find empirical evidence of contagion effect and spillovers between stock market and foreign exchange market during the recent global financial crisis, and the effect is stronger in the emerging markets than that in the developed markets. Two applications are provided to illustrate the usefulness of time-varying currency betas.

In this paper we have employed an asymmetric trivariate BEKK(3)-GARCH(1,1)-in-Mean model to examine the time-varying currency betas and market betas with contagion effects for the selected countries from the developed and emerging financial markets using a set of daily data including the returns of country indexes, the world market index and the exchange rate changes from 5 January 1999 to 25 July 2012. One notable feature of this study is that the time-varying currency betas are computed from the conditional variance and covariance of the return variables, thereby accommodating the conditional correlation between the bilateral exchange rate changes and market returns. As such, the estimated time-varying currency betas are more adequate than those estimates without taking the possible correlations into account. In addition, our model allows the prices of both world market and currency risks to be time-varying subject to a set of instruments. The results show that most of the selected instrumental variables are statistically significant explaining the dynamics of the prices of risk. The joint hypothesis test results confirm that the currency risk is not only priced in the concerned countries, but also time-varying, and that the market risk is also both priced and time-varying in these countries. This finding is consistent with some existing studies that both currency and market risks are priced factors. The instrumental variables DUSTP, SPX and MHDY are found to be significant in predicting the time variation of prices on the currency risk, while USDP, SPX and MHDY are significant on market risk. We also find evidence that there exist strong pure contagion and spillover effects between stock market and foreign exchange market in these financial markets. Moreover, the results reveal that all the six emerging markets show a much higher volatility in conditional currency betas in comparison with the developed markets, and the market beta in most countries tends to be less volatile than the currency betas, especially in the emerging markets. The US dollar exchange rate is found to be highly positively related to the returns on assets in some emerging markets, but negatively related to returns on assets in Canada. These findings have important implication for firms’ hedging strategies. The mean and standard deviation during the post-GFC period are found more than doubled that during the pre-GFC periods, and the recent GFC is found to have a much profound impact on the currency risk premiums in the emerging markets, especially in Indonesia, the Philippines and Taiwan. Based on the GPH test we find evidence of long-memory of the estimated currency betas and mean-reverting, which has important implications for trading strategies against currency risk in the exchange rate markets. The two applications of the estimated time-varying currency betas further demonstrate the usefulness of the time-varying exposures in strategic investment. The authors wish to thank the Journal Editor, Yasushi Hamao, the Associate Editor and an anonymous referee for their helpful comments and suggestions which have greatly improved the quality of the paper. We thank SCAPE at the Department of Economics, NUS for providing research support. The third author wishes to acknowledge the financial support from the Sumitomo Foundation.