عنوان انگلیسی
Decoupling by clienteles and by time in the financial markets: The case of two-stage stock-financed mergers
دانلود فوری مقاله + سفارش ترجمه 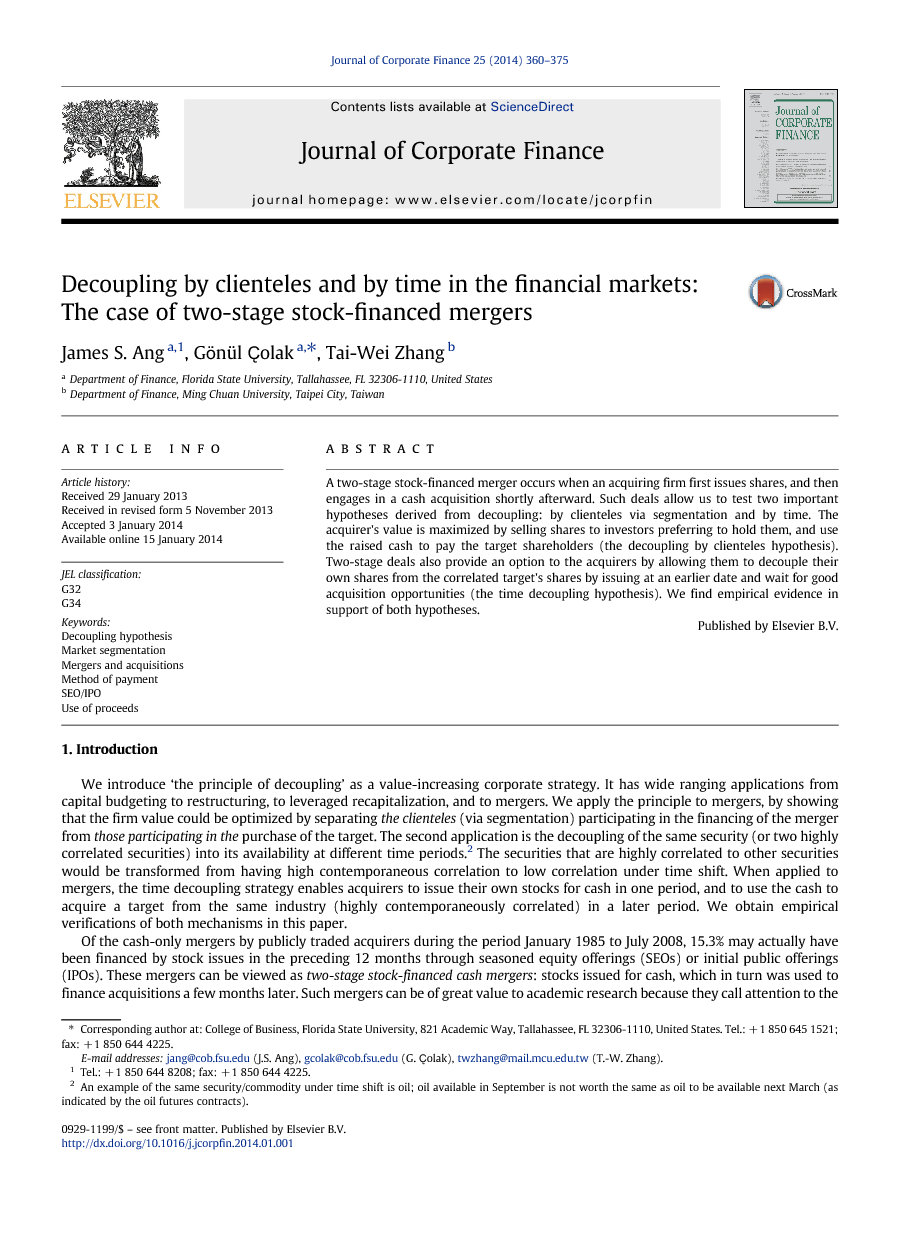 A two-stage stock-financed merger occurs when an acquiring firm first issues shares, and then engages in a cash acquisition shortly afterward. Such deals allow us to test two important hypotheses derived from decoupling: by clienteles via segmentation and by time. The acquirer's value is maximized by selling shares to investors preferring to hold them, and use the raised cash to pay the target shareholders (the decoupling by clienteles hypothesis). Two-stage deals also provide an option to the acquirers by allowing them to decouple their own shares from the correlated target's shares by issuing at an earlier date and wait for good acquisition opportunities (the time decoupling hypothesis). We find empirical evidence in support of both hypotheses.

Many financial decisions are a combination of a financing and an investment choice, either at the same time, or with a time lag. In this study, we introduce the principle of decoupling to be used as a financial strategy that separates the financing from investment choice. The principle is empirically verified from a sample of stock-financed cash acquisitions. Opportunity to profit by separating the financing and investment decisions arise when there exists different clienteles: those preferring to hold securities in the new financing round from those preferring to receive cash and not acquirer's securities. Opportunity to profit may also appear in the form of real options when the firm separates financing from investment by a time lag. An earlier opportunistic issuance of the firm's securities at higher prices provides the option, in the form of cash, to make later acquisitions. We find evidence to support market segmentation (decoupling of financing and investment decisions by clientele). To the best of our knowledge, this is the first empirical study that analyzes the market segmentation in the M&A market. We show that market segmentation be applied to both the financing and the investment clientele. We also find evidence in support of decoupling by time. Through such a decoupling, some firms are able to increase their chances to acquire same-industry firms even in a period when industry valuation is low. Separating the two decisions also allows us to resolve the confounding of overvalued equity and poor target choice problems that are inherent in simple stock mergers. From a clean sample of two-stage stock-financed mergers that have experienced price correction, we can better isolate the impact of acquirers' target choices. Although most stock acquirers suffer long-term loss in firm value post acquisition (suggesting an agency problem in which firms may regard funds raised from overvalued shares as cheap money), we are able to identify a sub-sample of IPO issuers that added value through acquisitions.