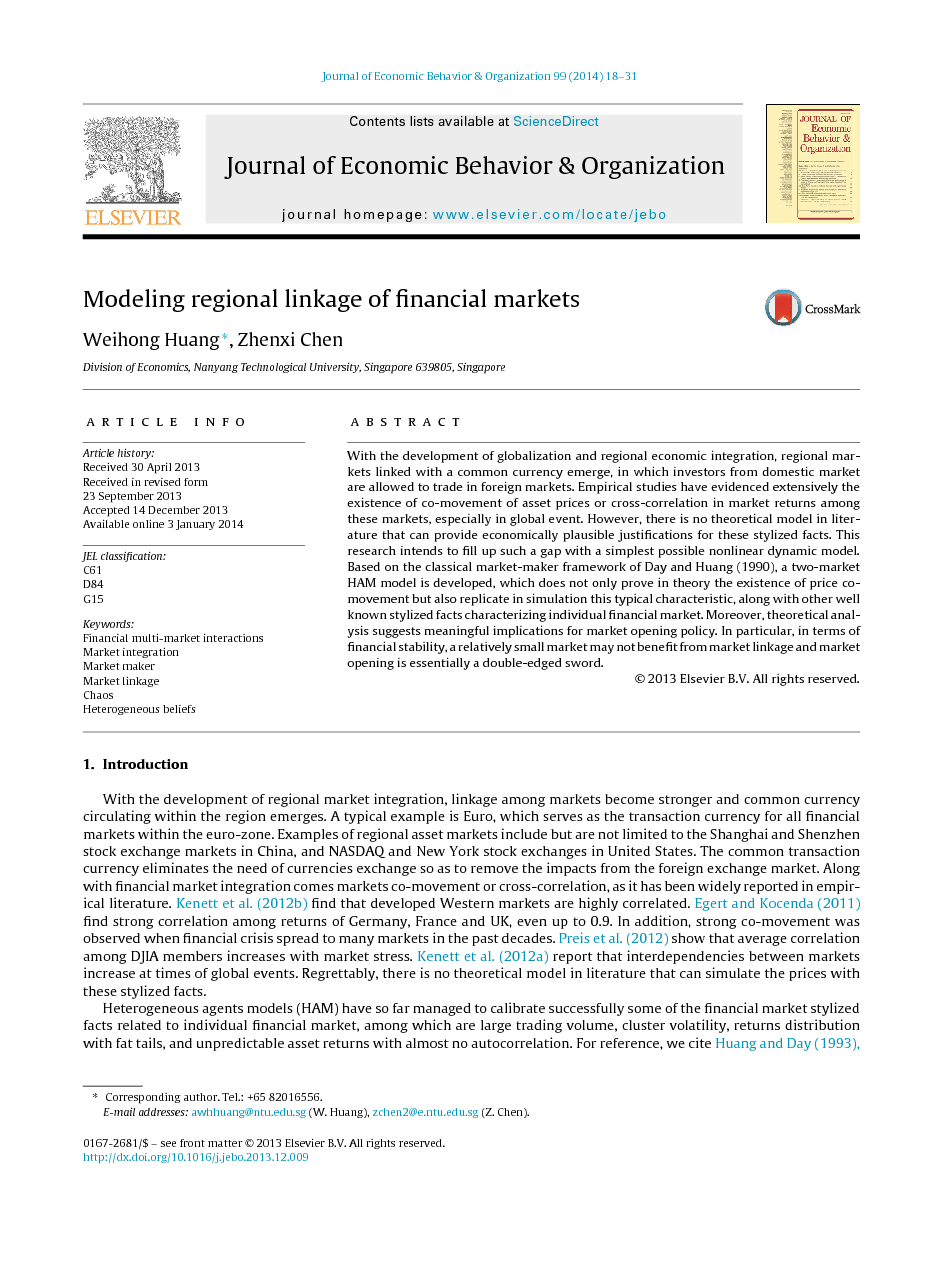 With the development of globalization and regional economic integration, regional markets linked with a common currency emerge, in which investors from domestic market are allowed to trade in foreign markets. Empirical studies have evidenced extensively the existence of co-movement of asset prices or cross-correlation in market returns among these markets, especially in global event. However, there is no theoretical model in literature that can provide economically plausible justifications for these stylized facts. This research intends to fill up such a gap with a simplest possible nonlinear dynamic model. Based on the classical market-maker framework of Day and Huang (1990), a two-market HAM model is developed, which does not only prove in theory the existence of price co-movement but also replicate in simulation this typical characteristic, along with other well known stylized facts characterizing individual financial market. Moreover, theoretical analysis suggests meaningful implications for market opening policy. In particular, in terms of financial stability, a relatively small market may not benefit from market linkage and market opening is essentially a double-edged sword.

A two-market heterogeneous agents model is developed. Each market has a market maker and two types of agents: chartists and fundamentalists. Agents of the same type are inhomogeneous across markets. Market linkage is established by allowing investors to invest in each market. Aware of capital movement of the investors and common factors underlying the two markets, individual market maker updates price for her market by weighing excess demands of both markets to take account of the impact from the other market. Existence of price co-movement/cross-correlation between markets is proved. By establishing market linkage, individual market's intrinsic dynamic properties may be overwritten. A market that is more stable initially in isolation will exert stabilizing effect on the market system while it will be subjected to destabilizing effect from the resultant market system. In addition, a market with a larger population has larger influence over the resulted assets prices of the market system. This market linkage can provide policy implication for financial market opening. In a world consisting of a small market and a large market (or market agglomeration), if the small market is stable compared to the large market, market opening of the small market will cause the small market to destabilize. Small market will benefit from market opening only if it is unstable originally compared to the large market. This example indicates that market opening is a double-edged sword. Decision of market opening should be based on the impact assessment on internal and external markets. Lastly, numerical simulations demonstrate the model's capability to generate some of the stylized facts of speculative financial market, especially the cross-correlation between markets. To our best knowledge, this is the first HAM model that is capable of generating the significant cross-correlation effect. This can be useful to study multi-market financial system as cross-correlation should become more and more evident given the current trend of financial integration. With market opening and financial market integration, investors enjoy lower transaction cost and more investment opportunities. However, we should be aware of the other side of the coin. If the process of financial market integration is inevitable, more and more markets tend to synchronize and market coupling and cross-correlation between markets should become larger, especially during global events such as financial crisis. In that extreme case, we will observe financial crisis contagion spreading from one market to another. Further studies of market cross-correlation are urged to have an insightful understanding of market interactions. We cite a latest study Huang and Chen (2013). They study market-system with more than two markets and demonstrate the formation of market clusters with same direction of asset price deviation. For financial crisis, the existing HAM literatures focus on a single market, e.g. Huang and Zheng (2012) and Huang et al. (2013). Our two-market model can be applied to study multi-market financial crisis and shed some light on multiple markets interactions. As cross-correlation is the key point of market interaction, another direction of future research can be behavioral explanation for market correlation from aspect of market data rather than statistical fitting, as exemplified by Feng et al. (2012).