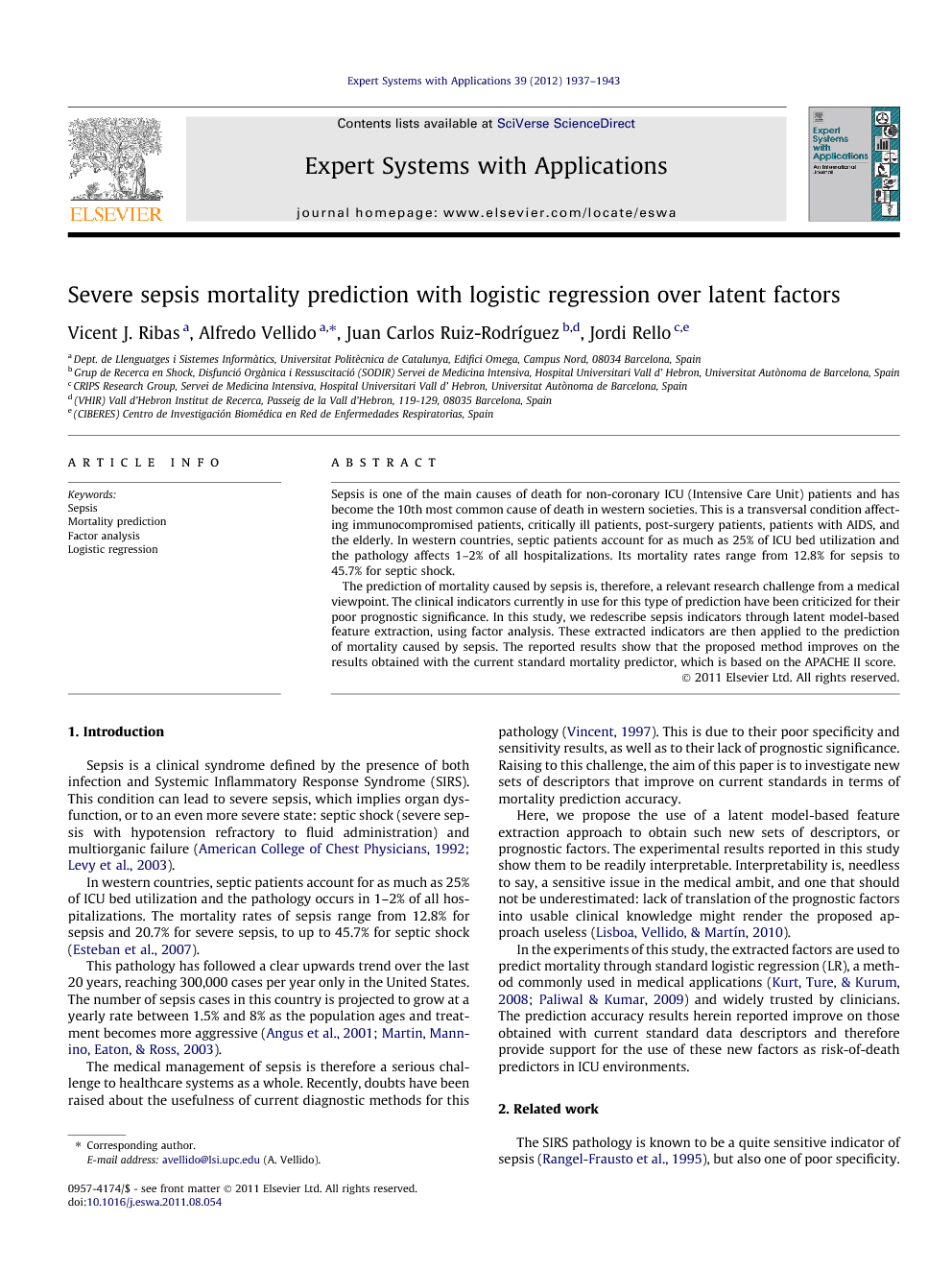 Sepsis is one of the main causes of death for non-coronary ICU (Intensive Care Unit) patients and has become the 10th most common cause of death in western societies. This is a transversal condition affecting immunocompromised patients, critically ill patients, post-surgery patients, patients with AIDS, and the elderly. In western countries, septic patients account for as much as 25% of ICU bed utilization and the pathology affects 1–2% of all hospitalizations. Its mortality rates range from 12.8% for sepsis to 45.7% for septic shock. The prediction of mortality caused by sepsis is, therefore, a relevant research challenge from a medical viewpoint. The clinical indicators currently in use for this type of prediction have been criticized for their poor prognostic significance. In this study, we redescribe sepsis indicators through latent model-based feature extraction, using factor analysis. These extracted indicators are then applied to the prediction of mortality caused by sepsis. The reported results show that the proposed method improves on the results obtained with the current standard mortality predictor, which is based on the APACHE II score.

Sepsis is a clinical syndrome defined by the presence of both infection and Systemic Inflammatory Response Syndrome (SIRS). This condition can lead to severe sepsis, which implies organ dysfunction, or to an even more severe state: septic shock (severe sepsis with hypotension refractory to fluid administration) and multiorganic failure (American College of Chest Physicians, 1992 and Levy et al., 2003). In western countries, septic patients account for as much as 25% of ICU bed utilization and the pathology occurs in 1–2% of all hospitalizations. The mortality rates of sepsis range from 12.8% for sepsis and 20.7% for severe sepsis, to up to 45.7% for septic shock (Esteban et al., 2007). This pathology has followed a clear upwards trend over the last 20 years, reaching 300,000 cases per year only in the United States. The number of sepsis cases in this country is projected to grow at a yearly rate between 1.5% and 8% as the population ages and treatment becomes more aggressive (Angus et al., 2001 and Martin et al., 2003). The medical management of sepsis is therefore a serious challenge to healthcare systems as a whole. Recently, doubts have been raised about the usefulness of current diagnostic methods for this pathology (Vincent, 1997). This is due to their poor specificity and sensitivity results, as well as to their lack of prognostic significance. Raising to this challenge, the aim of this paper is to investigate new sets of descriptors that improve on current standards in terms of mortality prediction accuracy. Here, we propose the use of a latent model-based feature extraction approach to obtain such new sets of descriptors, or prognostic factors. The experimental results reported in this study show them to be readily interpretable. Interpretability is, needless to say, a sensitive issue in the medical ambit, and one that should not be underestimated: lack of translation of the prognostic factors into usable clinical knowledge might render the proposed approach useless (Lisboa, Vellido, & Martín, 2010). In the experiments of this study, the extracted factors are used to predict mortality through standard logistic regression (LR), a method commonly used in medical applications (Kurt et al., 2008 and Paliwal and Kumar, 2009) and widely trusted by clinicians. The prediction accuracy results herein reported improve on those obtained with current standard data descriptors and therefore provide support for the use of these new factors as risk-of-death predictors in ICU environments.

Sepsis is a prevalent pathology in the clinical ICU environment, and one with relatively high mortality levels associated. Its medical management is therefore both a sensitive issue and a serious challenge to healthcare systems. The clinical indicators of sepsis currently in use are known to be of limited relevance as mortality predictors. In the assessment of ROD for critically ill patients, sensitivity is of paramount importance due to the fact that more aggressive treatment and therapeutic actions may result in better outcomes for high risk patients. As validated by the results reported in Section 5.7 and similar ones reported in other studies (Wong et al., 1995), the ROD formula presented in Knaus et al. (1985) is poor in terms of sensitivity (i.e. it results in a high number of false positive cases). This is despite the fact that it is widely accepted in practice and yields acceptable accuracy results. Its poor sensitivity may be the result of its formula being based on clinical traits and the APACHE II score only. In this paper we have put forward a new and simple method for the assessment of ROD in septic patients. It proposes a change of data representation in the form of feature extraction using FA, and uses LR over the resulting latent factors for the prediction itself. The main advantage of the proposed approach is that it removes collinearities and noisy inputs while keeping the method simple and fully interpretable from a clinical point of view. In other words, the strength of this study lies in the fact that it is possible to derive a prognostic score from a set of physiopathologic and therapeutic variables, which are available at the onset of severe sepsis. The proposed method may be understood as a generalization of the ROD formula introduced in Knaus et al. (1985), where the ϵ corrective factor, which models clinical traits at admittance in the ICU, is accounted for by the latent-factor representation. It takes not only the contribution of the APACHE II score into consideration, but also other important clinical traits such as the number of dysfunctioning organs combined with the Sequential Organ Failure Assessment (SOFA), which also impacts on the mortality rates of Septic patients. The reported ROD assessment takes into consideration the Respiratory and Hepatic SOFA scores. It is precisely all the extra parameters considered in our experiments the reason behind the significant improvement on sensitivity. This improvement is achieved while keeping model complexity under control and without compromising the interpretability of the results (given that all the parameters involved are routinely monitored in an ICU). A word of caution must be given, though, as the system performance has only been evaluated in a single ICU and a limited population sample. For this reason, future work should lead towards a multi-centric prospective study, in order to validate the generalizability of the method.