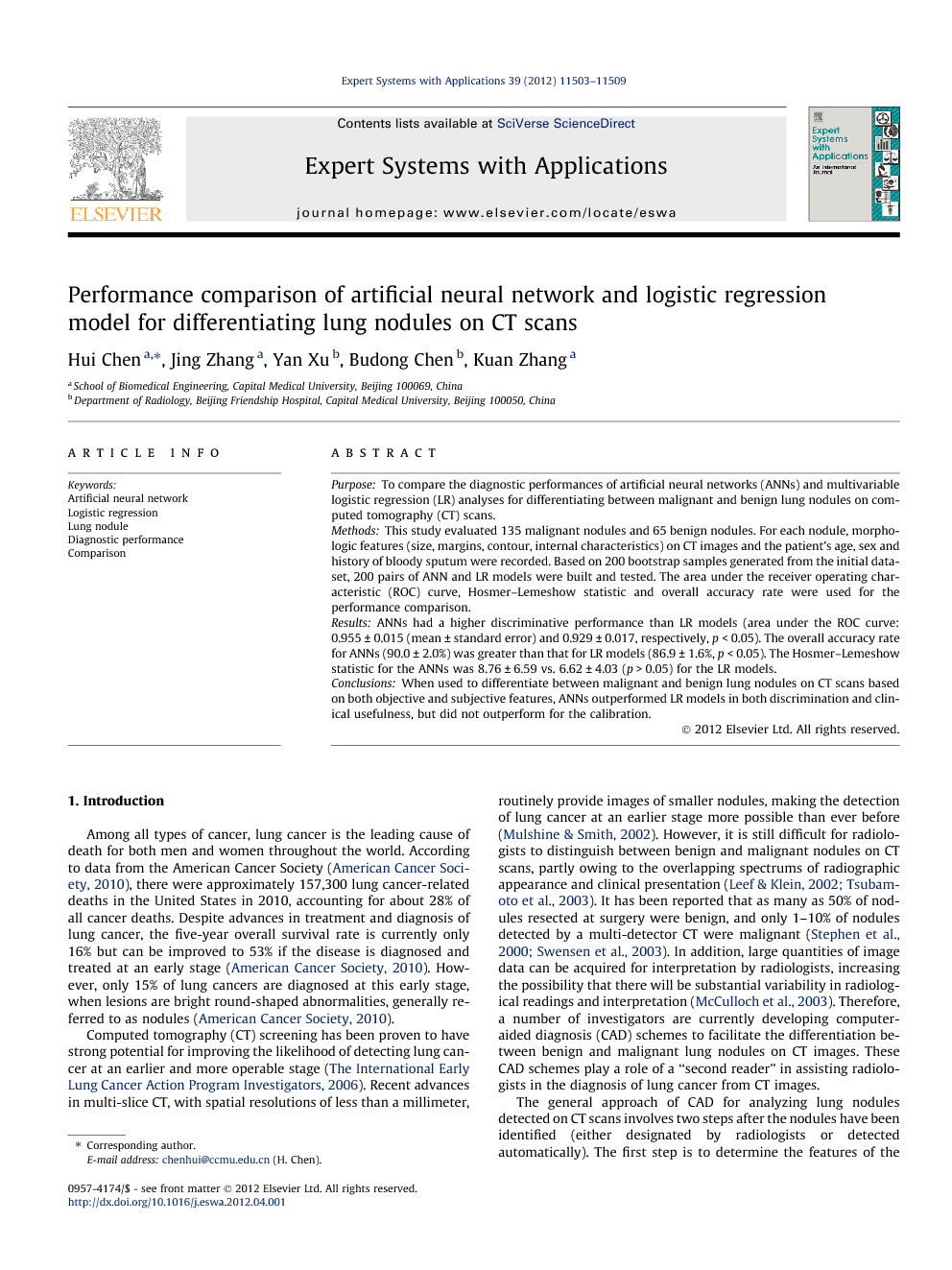 Purpose To compare the diagnostic performances of artificial neural networks (ANNs) and multivariable logistic regression (LR) analyses for differentiating between malignant and benign lung nodules on computed tomography (CT) scans. Methods This study evaluated 135 malignant nodules and 65 benign nodules. For each nodule, morphologic features (size, margins, contour, internal characteristics) on CT images and the patient’s age, sex and history of bloody sputum were recorded. Based on 200 bootstrap samples generated from the initial dataset, 200 pairs of ANN and LR models were built and tested. The area under the receiver operating characteristic (ROC) curve, Hosmer–Lemeshow statistic and overall accuracy rate were used for the performance comparison. Results ANNs had a higher discriminative performance than LR models (area under the ROC curve: 0.955 ± 0.015 (mean ± standard error) and 0.929 ± 0.017, respectively, p < 0.05). The overall accuracy rate for ANNs (90.0 ± 2.0%) was greater than that for LR models (86.9 ± 1.6%, p < 0.05). The Hosmer–Lemeshow statistic for the ANNs was 8.76 ± 6.59 vs. 6.62 ± 4.03 (p > 0.05) for the LR models. Conclusions When used to differentiate between malignant and benign lung nodules on CT scans based on both objective and subjective features, ANNs outperformed LR models in both discrimination and clinical usefulness, but did not outperform for the calibration.

Among all types of cancer, lung cancer is the leading cause of death for both men and women throughout the world. According to data from the American Cancer Society (American Cancer Society, 2010), there were approximately 157,300 lung cancer-related deaths in the United States in 2010, accounting for about 28% of all cancer deaths. Despite advances in treatment and diagnosis of lung cancer, the five-year overall survival rate is currently only 16% but can be improved to 53% if the disease is diagnosed and treated at an early stage (American Cancer Society, 2010). However, only 15% of lung cancers are diagnosed at this early stage, when lesions are bright round-shaped abnormalities, generally referred to as nodules (American Cancer Society, 2010). Computed tomography (CT) screening has been proven to have strong potential for improving the likelihood of detecting lung cancer at an earlier and more operable stage (The International Early Lung Cancer Action Program Investigators, 2006). Recent advances in multi-slice CT, with spatial resolutions of less than a millimeter, routinely provide images of smaller nodules, making the detection of lung cancer at an earlier stage more possible than ever before (Mulshine & Smith, 2002). However, it is still difficult for radiologists to distinguish between benign and malignant nodules on CT scans, partly owing to the overlapping spectrums of radiographic appearance and clinical presentation (Leef and Klein, 2002 and Tsubamoto et al., 2003). It has been reported that as many as 50% of nodules resected at surgery were benign, and only 1–10% of nodules detected by a multi-detector CT were malignant (Stephen et al., 2000 and Swensen et al., 2003). In addition, large quantities of image data can be acquired for interpretation by radiologists, increasing the possibility that there will be substantial variability in radiological readings and interpretation (McCulloch et al., 2003). Therefore, a number of investigators are currently developing computer-aided diagnosis (CAD) schemes to facilitate the differentiation between benign and malignant lung nodules on CT images. These CAD schemes play a role of a “second reader” in assisting radiologists in the diagnosis of lung cancer from CT images. The general approach of CAD for analyzing lung nodules detected on CT scans involves two steps after the nodules have been identified (either designated by radiologists or detected automatically). The first step is to determine the features of the nodules and the patient’s information, both of which are used to build the CAD schemes are built. Classification techniques such as linear discriminant analysis (Aoyama et al., 2003, Armato et al., 2003, Mori et al., 2005, Shah et al., 2005a, Shah et al., 2005b, Shiraishi et al., 2003 and Way et al., 2009), support vector machine (Way et al., 2009), logistic regression (LR) analysis (Shah et al., 2005a and Shah et al., 2005b) and artificial neural network (ANN) (Awai, 2006, Lee et al., 2004, Lo et al., 2003, Matsuki et al., 2002 and Suzuki et al., 2005) are then used to develop models for classifying a nodule as either malignant or benign. Because of the inherent differences in these classification techniques, model selection becomes an important step in the CAD development procedure. Unfortunately, there is no well-accepted theory to guide the model selection based on the complexity and the nature of the diagnostic task (Mangiameli, West, & Rampalc, 2004). As a result, there is an increasing effort to compare the diagnostic performance of different classification models in different CAD schemes for specific medical diagnosis tasks (Behrman et al., 2007, Bourdes et al., 2007, Chen et al., 2009, Lehmann et al., 2007, Moszynski et al., 2006 and Temurtas et al., 2009). Among these comparisons, the difference between ANN and LR models is of practical importance to the development of CAD. If the comparative results show limited benefit from using a non-linear ANN model, one should usually turn to the less complicated LR model, which has the advantage of being more readily interpretable and can thus provide more helpful information for making a diagnostic decision. To our knowledge, no study has compared ANNs and LR models for lung nodule diagnosis using CT images. In this article, we illustrate LR models and ANNs and the application of these models to the classification of lung nodules based on several clinical features and CT signs. In addition, we compare and discuss the performance of the two models from three aspects: calibration, discrimination and clinical usefulness, which are measured by Hosmer–Lemeshow (HL) statistic, the area under the receiver operating characteristic (ROC) curve, and the overall accuracy (ACC), respectively. The unique advantages and disadvantages of the two models may prove complementary in contributing to improved clinical decision making.