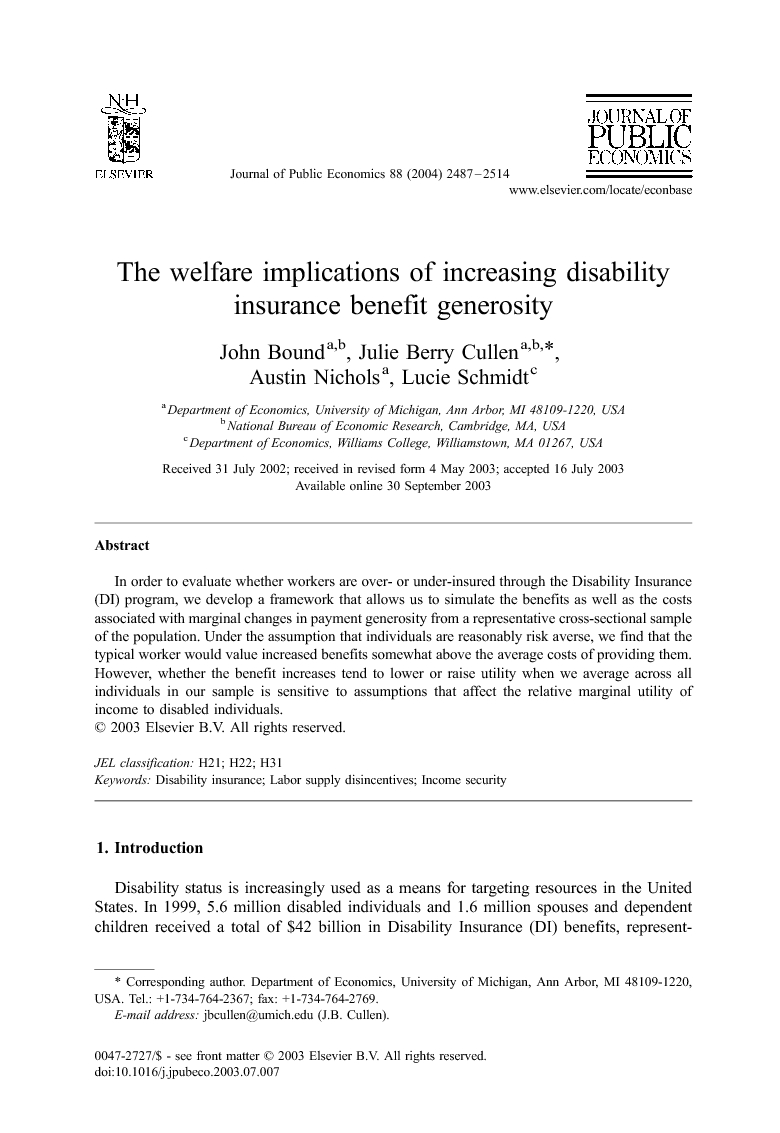 In order to evaluate whether workers are over- or under-insured through the Disability Insurance (DI) program, we develop a framework that allows us to simulate the benefits as well as the costs associated with marginal changes in payment generosity from a representative cross-sectional sample of the population. Under the assumption that individuals are reasonably risk averse, we find that the typical worker would value increased benefits somewhat above the average costs of providing them. However, whether the benefit increases tend to lower or raise utility when we average across all individuals in our sample is sensitive to assumptions that affect the relative marginal utility of income to disabled individuals.

We develop three basic insights into the desirability of increasing DI benefits from our baseline analysis. First, while the indirect costs of benefit increases appear substantial, the value attached to such increases for the typical worker is also substantial. Given our estimated average implicit price of $1.50, representative workers of all education levels should be willing to purchase an additional $1 of disability insurance under moderate levels of risk aversion. Second, while the moral hazard costs appear to be relatively low, the implicit price of additional insurance can be quite large for some subgroups of the population due to redistribution. The implicit price of an additional dollar varies from less than $1 for individuals with less than a high school degree to more than $7 for individuals with a college degree. While the importance of redistribution across broad education categories has not been previously quantified, this pattern in implicit prices is not surprising given differences in the incidence of disability and in replacement rates. Our final conclusion is the least acknowledged and perhaps most surprising. We find that an increase in benefits leads to transfers from lower income individuals and states of the world to individuals and states with more moderate income, such that these transfers lead to net welfare losses at high levels of risk aversion. From an individual insurance perspective, a marginal increase in DI benefits is less attractive because of this potential redistribution to bad states from worse states. From a social perspective, inequality aversion also plays a role. This highlights that DI treats disability as a more “deserving” cause of low income than other negative shocks that affect able-bodied individuals, and that the disabled are treated as more deserving than the non-disabled poor. The incompleteness of the safety net could lead to similar counterintuitive findings for analyses of the adequacy of other categorical social insurance programs as well. Although our initial finding is that individuals are, if anything, over-insured against the subset of career-ending disabilities covered by DI, it is important to remember that we are evaluating a marginal change in benefit generosity. These results are derived in the context of a program that provides generous benefits to low-income workers who qualify. Our estimates of willingness to pay make it clear that individuals would/should place a high value on the existence of the program. Thus, an analysis that began from a base of less generous replacement rates would be expected to reach different conclusions. The fact that we do indeed reach the opposite conclusion about the adequacy of the income security provided by DI under the alternative model that incorporates health insurance, which alters effective replacement rates, highlights this point. Though our tools do not allow us to say much about the optimal level of DI benefits, this sensitivity of our results may imply that the current level is in the neighborhood of what would be conditionally optimal.