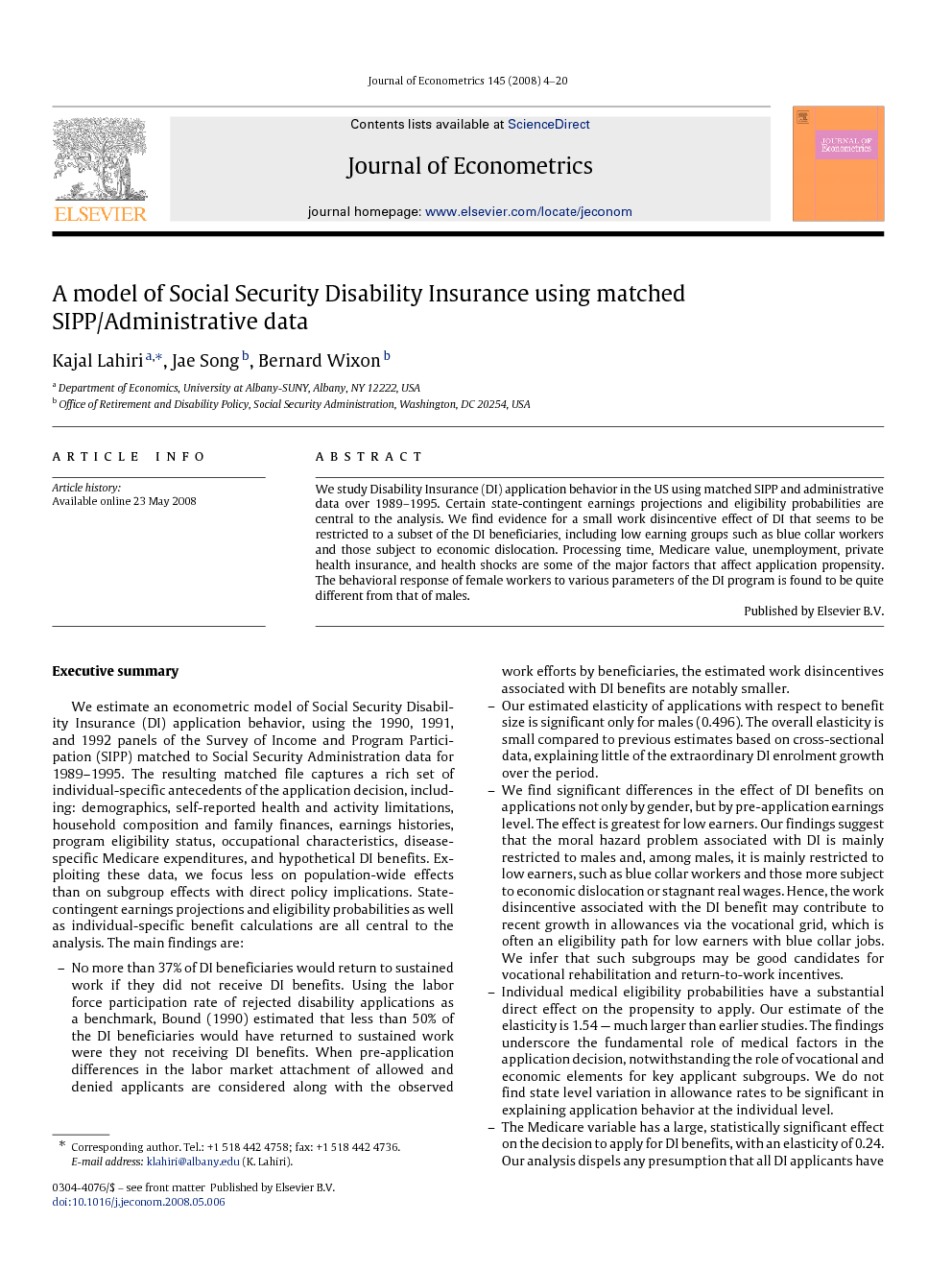 We study Disability Insurance (DI) application behavior in the US using matched SIPP and administrative data over 1989–1995. Certain state-contingent earnings projections and eligibility probabilities are central to the analysis. We find evidence for a small work disincentive effect of DI that seems to be restricted to a subset of the DI beneficiaries, including low earning groups such as blue collar workers and those subject to economic dislocation. Processing time, Medicare value, unemployment, private health insurance, and health shocks are some of the major factors that affect application propensity. The behavioral response of female workers to various parameters of the DI program is found to be quite different from that of males.

Building on Lahiri et al. (1995) and Hu et al. (2001), in this paper we estimate an econometric model of DI application behavior, using the 1990, 1991, and 1992 panels of the Survey of Income and Program Participation (SIPP) matched to SSA data for 1989–1995. The resulting matched file captures a rich set of individual-specific antecedents of the application decision, including: demographics, self-reported health and activity limitations, household composition and family finances (SIPP); earnings histories (SER); program eligibility status (MBR and 831); occupational characteristics (DOT); disease-specific Medicare expenditures (DCG/HCC data from CMS); and hypothetical DI benefits (SSA benefit calculator). Exploiting these data, we focus less on population-wide effects than on subgroup effects with direct policy implications. State-contingent earnings projections and eligibility probabilities as well as individual-specific benefit calculations are all central to the analysis. The Dictionary of Occupational Titles (DOT) data allow us to identify the blue collar workers with certain special occupational characteristics, a key subgroup of interest to policy makers and researchers. The main findings are: • Not more than 37% of DI beneficiaries would return to sustained work if they did not receive DI benefits. Using the labor force participation rate of rejected disability applications as a benchmark, Bound (1989) concluded that less than 50% of the DI beneficiaries would have returned to sustained work were they not receiving DI. When the pre-application differences in the labor market attachment of the allowed and denied applicants are considered together with the observed work efforts by the beneficiaries, the estimated work disincentives associated with DI benefits are notably smaller. Our estimates use more recent data from the 1990’s and Social Security earnings records many years before and after disability applications. Moreover, our matched data does not suffer from some of the data problems in Bound (1989) that were raised by Parsons (1991). • Our estimated elasticity of applications with respect to benefit size for the whole sample (both male and female) is only 0.171. This is small compared to estimates based on cross-sectional data, and explains little of the extraordinary DI enrollment growth during the last fifteen years. For females the effect is non-significant, but for males it is 0.496 and significant—somewhat smaller than estimates from Halpern and Hausman (1986) or Kreider (1999), but similar to those based on time series data, cf. Bound and Burkhauser (1999). • We find significant differences in the effect of DI benefits on applications not only by gender, but by pre-application earnings level. The estimated coefficient of the DI benefit is negatively correlated with average earnings 5–6 years before application. The effect is greatest for low earners. Thus, our findings suggest that the moral hazard problem associated with DI is mainly restricted to males and, among males, it is mainly restricted to low earners, such as blue collar workers and those more subject to economic dislocation or stagnant real wages. Hence, the work disincentive associated with the DI benefit may contribute to recent growth in allowances via the vocational grid, which is often an eligibility path for low earners with blue collar jobs. We infer that such subgroups may be good candidates for vocational rehabilitation and return-to-work incentives. • The individual medical eligibility probabilities for DI benefits have a substantial direct effect on application propensity. In our preferred specification, the elasticity is approximately 1.54—much larger than those reported by Kreider (1999) and Halpern and Hausman (1986). The findings underscore the fundamental role of medical factors in the application decision, notwithstanding the role of vocational and economic elements for key subgroups within the applicant pool. Interestingly, unlike Gruber and Kubik (1997), we do not find the state level variation in the allowance rate (average screening stringency) to be significant in explaining application behavior at the individual level, although it is possible that the individual eligibility probabilities have a dominant state-level component. • The Medicare variable has a large, statistically significant effect on the decision to apply for DI benefits, with an elasticity of 0.24. Our analysis dispels any untested belief that all DI applicants have uniformly high health costs. For example, the costs of persons with cancer or AIDS are several times higher than those of persons with mental problems or a stroke and ten times higher than those of persons with hypertension or deafness. Based on diagnosis-specific cost information, in our sample we find that the average expected value of Medicare for applicants is more than 50% higher than that of non-applicants. Furthermore, the effect of Medicare boosts the average probability of application by nearly 12%. Ours is the first study to capture the effect of the expected value of medical insurance on application behavior. • Local area unemployment rates significantly affect applications. The elasticity is 0.30 for males and females combined; however, the effect is much higher for males (0.42). The unemployment effect is very similar to that obtained by Rupp and Stapleton (1995), who used state level data for 1989–92. Our unemployment variable explains a large part of the growth in disability applications in the early 1990s. This finding suggests the need for a policy emphasis on rehabilitation and return to work, including the new Ticket to Work effort. In addition, we need more analysis of the vocational grid—the special provision of the disability determination process used for older, blue collar workers—to establish its role in recent program growth, see Autor and Duggan (2006) as well as Chen and van der Klaauw (2008). • We find a significant effect for variations in processing time across states and over time on application behavior. The elasticity is not significant for females, but is significant for males (0.40). This effect was significant in studies that used data from the 1970s, but was not significant in studies based on data from the 1990s. • Overall, the application equation for females is quite different from that for males. Although medical eligibility probability has a significant impact on both females and males, key policy variables like DI benefits and processing time do not seem to affect female application behavior. The singular behavioral response of female workers to parameters of the disability insurance program is intriguing and warrants further research.