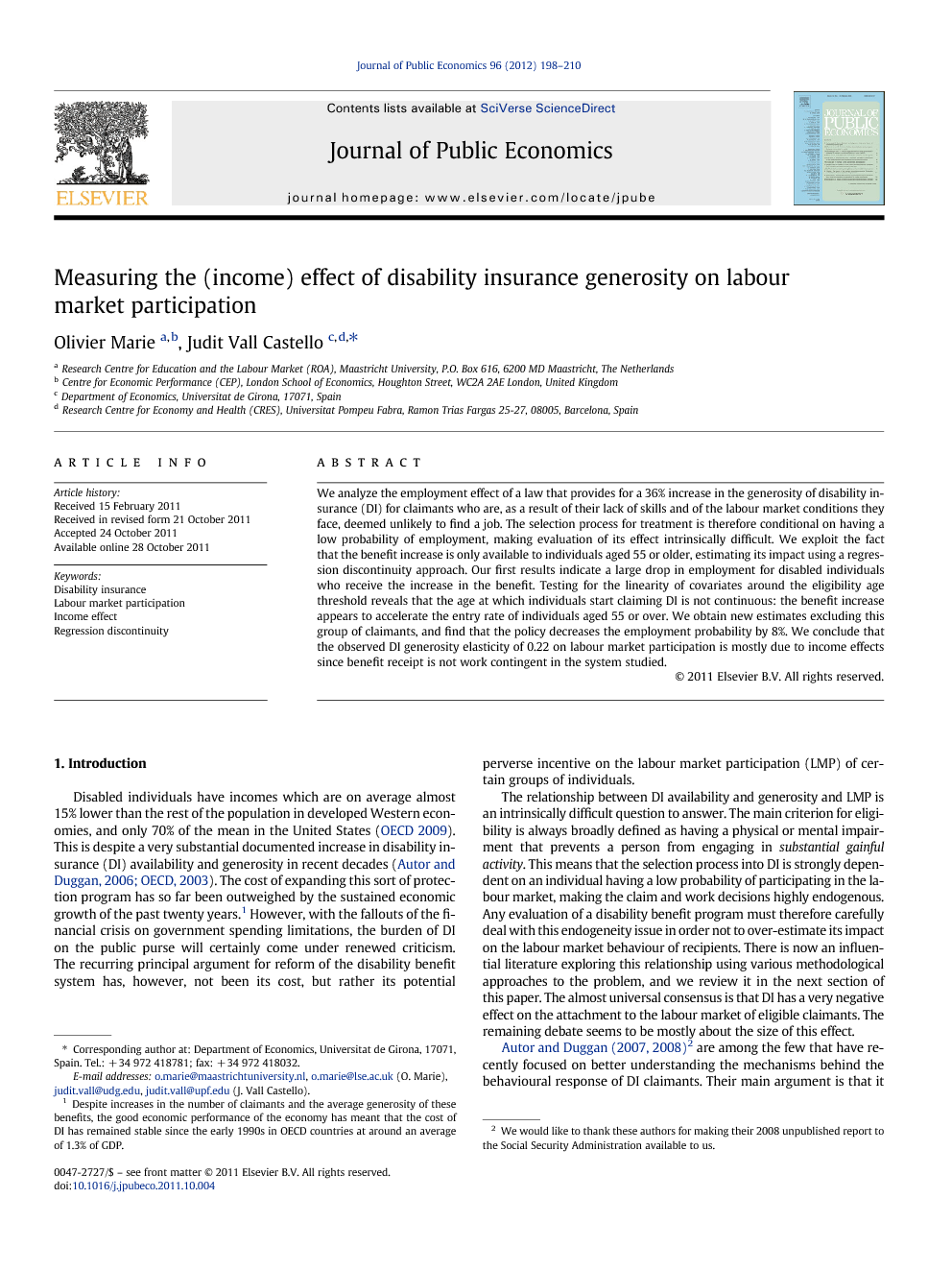 We analyze the employment effect of a law that provides for a 36% increase in the generosity of disability insurance (DI) for claimants who are, as a result of their lack of skills and of the labour market conditions they face, deemed unlikely to find a job. The selection process for treatment is therefore conditional on having a low probability of employment, making evaluation of its effect intrinsically difficult. We exploit the fact that the benefit increase is only available to individuals aged 55 or older, estimating its impact using a regression discontinuity approach. Our first results indicate a large drop in employment for disabled individuals who receive the increase in the benefit. Testing for the linearity of covariates around the eligibility age threshold reveals that the age at which individuals start claiming DI is not continuous: the benefit increase appears to accelerate the entry rate of individuals aged 55 or over. We obtain new estimates excluding this group of claimants, and find that the policy decreases the employment probability by 8%. We conclude that the observed DI generosity elasticity of 0.22 on labour market participation is mostly due to income effects since benefit receipt is not work contingent in the system studied.

In this paper we analyse the employment effects of a 36% increase in the amount of disability pensions (DII) that is granted to almost 60% of the individuals aged 55 or above who are receiving a partial disability pension in Spain. The DI system in Spain allows partially disabled claimants to combine the receipt of benefits with income from employment without any implicit tax on labour supply being levied. We exploit this discontinuity of DII provision from age 55 onwards and first apply a straightforward fuzzy regression discontinuity approach to estimate the effect of treatment on LMP (which are likely to be endogenously determined). We generate RD estimates using different age windows, from +/−4 to 1 year before and after the cut-off age, which suggests that the increase in DI generosity reduces the probability of working by at least 3 percentage points. However, once we model more carefully for the impact of other individual characteristics, we discover an acceleration of entry into DI for claimants age 55 and older, which we believe is partly due to the increased generosity of available benefits. Once we take this phenomenon into account, we estimate that the employment of DI recipients would have been 8% higher if they had not received the benefit generosity increase. Since the replacement rate is in practice increased by 36%, this translates into an elasticity of DI generosity to LMP of approximately 0.22. These results are very much in line with the literature on the employment effect of DI which almost unanimously concludes a negative causal relationship. Our results, nevertheless, are an important contribution for two distinct reasons. First, they are among the original, with Gruber (2000), to focus on the impact of benefit generosity rather than entitlement. Second, the features of the DI institutional system we study make it possible to rule out the idea that this impact stems from a substitution effect. As benefit receipt is not work contingent, it suggests that there is an important income effect at play in the work decision of older workers as argued by Autor and Duggan, 2007 and Autor and Duggan, 2008. This latter point is important as it has potential implications in terms of the efficiency of DI policy, since an income effect does not imply any deadweight loss. We believe this should be seriously considered in future reforms which may use the disincentive substitution argument to cut the level of benefits of a group in an already relatively weak income position. This is especially true considering the findings of Bound et al. (2004) which stress that workers, on average, value increased benefits somewhat above the average cost of providing them.