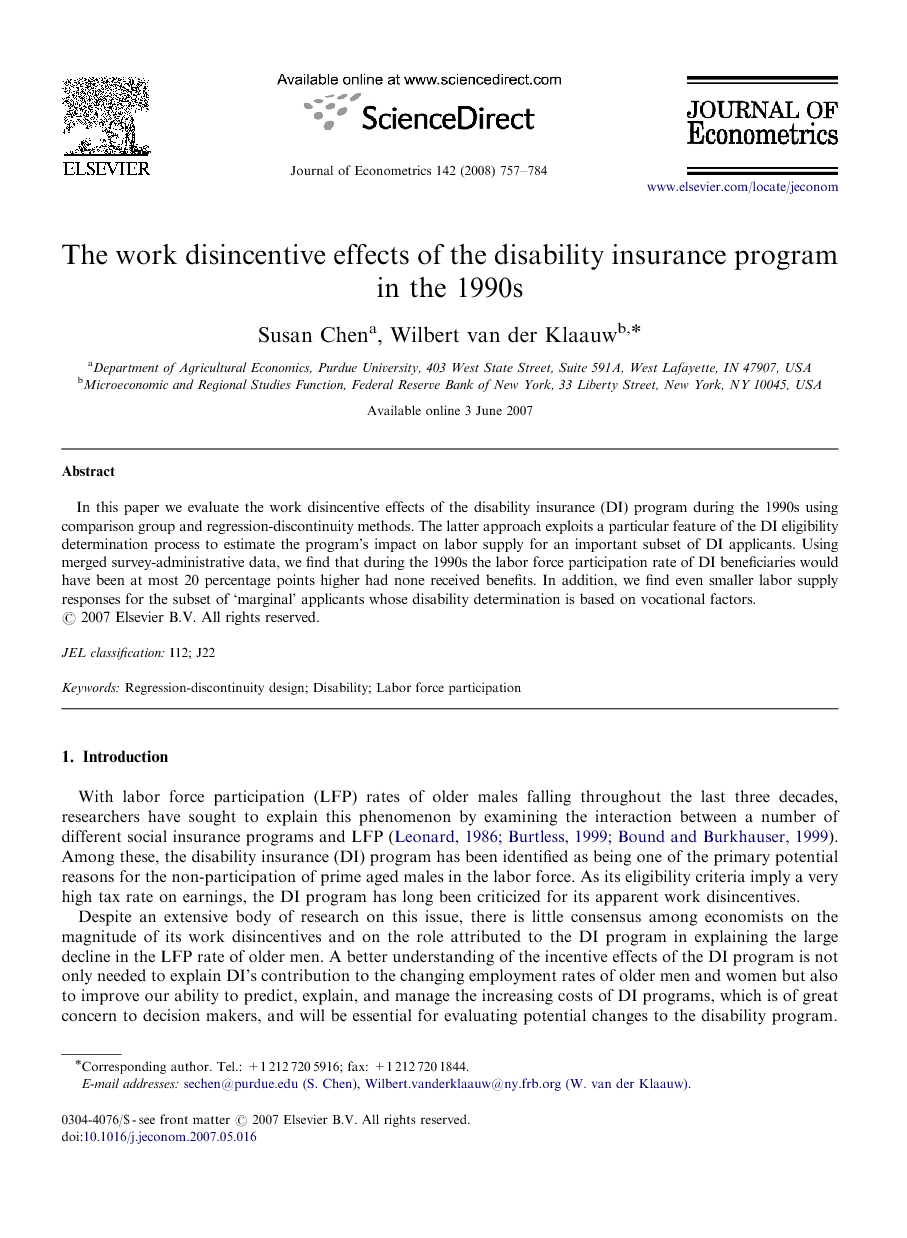 In this paper we evaluate the work disincentive effects of the disability insurance (DI) program during the 1990s using comparison group and regression-discontinuity methods. The latter approach exploits a particular feature of the DI eligibility determination process to estimate the program's impact on labor supply for an important subset of DI applicants. Using merged survey-administrative data, we find that during the 1990s the labor force participation rate of DI beneficiaries would have been at most 20 percentage points higher had none received benefits. In addition, we find even smaller labor supply responses for the subset of ‘marginal’ applicants whose disability determination is based on vocational factors.

In this paper we assessed the work disincentive effect of the DI program during the 1990s, based on a new data set in which administrative disability application and award records were merged with the 1990–1996 panels of the SIPP. Using a comparison group approach suggested by John Bound, we estimate that during the 1990s the LFP rate of DI beneficiaries would have been at most 20 percentage points higher had none received benefits. Similarly, we estimate that DI receipt leads to a reduction in average monthly hours of work of at most 30 h. We also apply a regression discontinuity approach to find even smaller labor supply responses for a group of ‘marginal’ applicants whose medical condition is more difficult to assess and whose disability determination is based on vocational factors. Based on our longer-term sample the RD estimates indicate that DI decreases labor supply by approximately 16–20 h per month and participation by 6–12 percentage points. This applicant group represents a non-trivial proportion of applicants and of beneficiaries. Between 1980 and 1990 the number of applicants who qualified on the basis of vocational criteria increased from 26% to 37% (Lahiri et al., 1995), and it represents 39% of all applicants in our sample. The RD estimates measure the average labor supply response for this group to a change in one component of the DI program—an age cutoff in the medical vocational grid. In terms of spending, the DI program is one of the largest social insurance programs in the United States. In 1999, over 100 billion dollars was spent providing medical benefits and cash payments to beneficiaries and their families. Credible estimates or bounds for the effect of DI on labor supply are therefore extremely important to policymakers. Increasing the age eligibility cutoff values would be one way to control the growing costs and caseload of the DI program that is likely to accompany the SSA's increase in the normal retirement age. The regression discontinuity estimates presented in this paper indicate that the impact of a small increase in the age cutoffs would only have a modest overall effect on LFP. Our estimates also indicate that within this group responses vary with individual characteristics, with male and SSDI applicants generally showing somewhat larger labor supply responses than female and SSI applicants. Combined our findings suggest that during the 1990s the work disincentive effects of the DI program were rather modest: a large majority of applicants would not have worked even if none had received disability benefits. At first sight these findings appear to be at odds with time series evidence presented by Bound and Waidmann (2002) of a close association during the 1990s between the fraction of the working aged population receiving DI benefits and the growth in the fraction of the population that identifies itself as health-limited and out of work. These trends would be consistent with a movement of men and women in relative poor health out of the labor force and onto disability roles, suggesting that those drawn to apply for disability benefits when the program was expanding during the 1990s would have worked had they not applied for, and in many cases, been awarded DI benefits. However, the results shown by Bound and Waidmann are inconclusive about the causality of the observed trends. In addition to an increase in generosity and a relaxation in the requirements to qualify for DI benefits, there are several other factors which are likely to have contributed to the observed employment decline. Several researchers have attributed some of the decline in employment among the disabled to the introduction of the Americans with Disability Act of 1990 which took effect in 1992 and which led to an increase in the cost to employers of hiring such workers (DeLeire, 2000, DeLeire, 2003, Acemoglu and Angrist, 2001 and Jolls and Prescott, 2004). There is also evidence pointing to the more general role of declining labor market conditions for low skilled workers during the 1990s (Juhn et al., 2002). Decreased opportunities for low-skilled workers during the early and middle part of the decade, coupled with a decreasing real wage and increasing real disability benefit amounts for this segment of the labor force is likely to have induced some employed and laid off workers, to apply for disability benefits. Paired with a liberalization of screening standards, the drop in demand for older, less skilled workers in poor health may therefore have led to higher DI recipiency rates (Rupp and Stapleton, 1995). Our finding of a small work disincentive effect associated with disability benefit receipt, even smaller than those found for the 1970s, is therefore likely to reflect the unfavorable labor market conditions, and the lower labor force attachment of DI applicants during this period. During the period between the 1970s (when Bound's data was collected) and the nineties, there has also been a significant increase in the labor supply of married women. If the presence of these women creates a source of income maintenance then this may also have contributed to the smaller employment effect associated with benefit receipt. In conclusion, our results suggest that most of those drawn to the DI program during the 1990s would not have worked in absence of disability benefits, but instead would have been unemployed or on other types of welfare support. Whether they would not work because of their medical conditions, unfavorable labor market conditions, or increased spousal labor supply is beyond the scope of this paper, but is an important area for further inquiry.