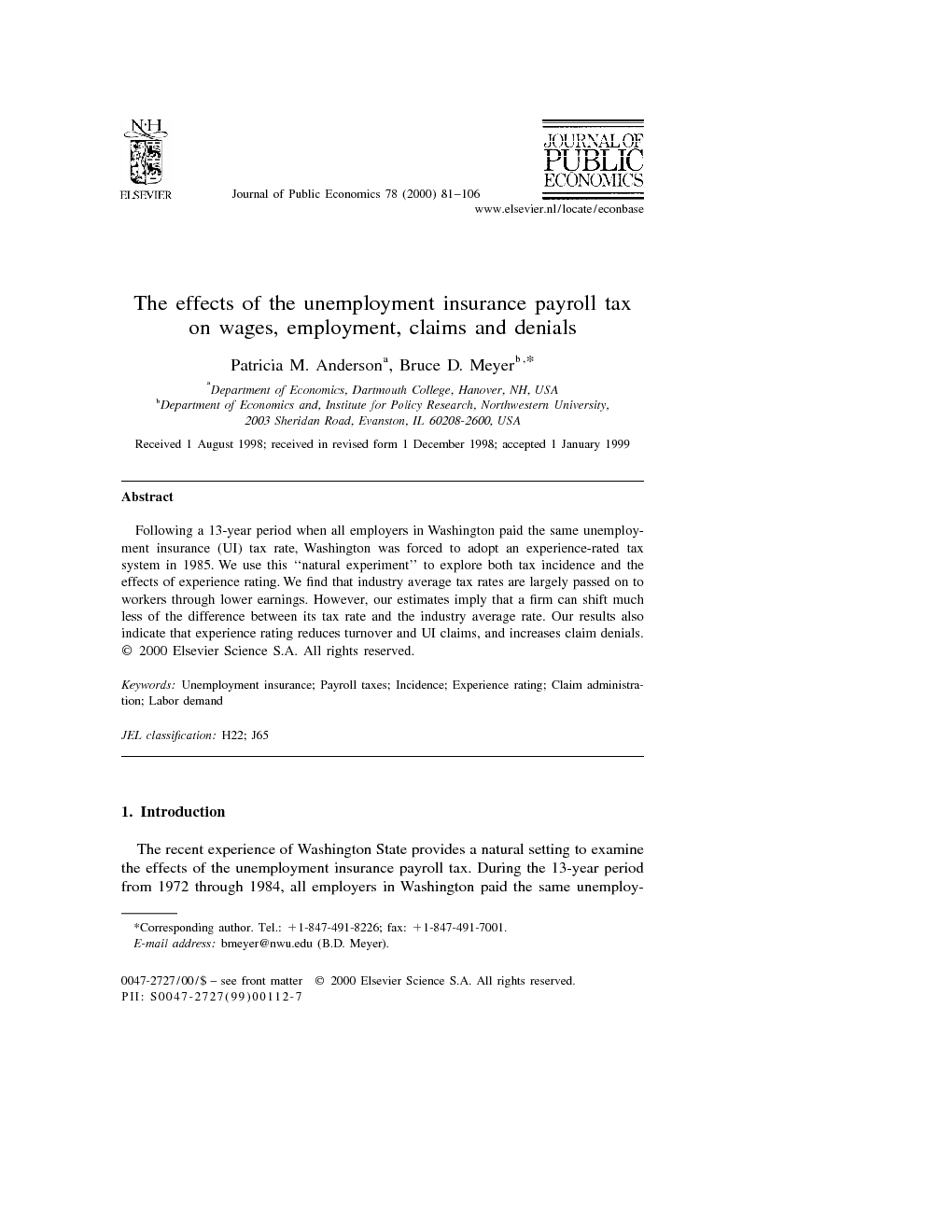 Following a 13-year period when all employers in Washington paid the same unemployment insurance (UI) tax rate, Washington was forced to adopt an experience-rated tax system in 1985. We use this “natural experiment” to explore both tax incidence and the effects of experience rating. We find that industry average tax rates are largely passed on to workers through lower earnings. However, our estimates imply that a firm can shift much less of the difference between its tax rate and the industry average rate. Our results also indicate that experience rating reduces turnover and UI claims, and increases claim denials.

The recent experience of Washington State provides a natural setting to examine the effects of the unemployment insurance payroll tax. During the 13-year period from 1972 through 1984, all employers in Washington paid the same unemployment insurance (UI) tax rate, but a by-product of Federal legislation then forced Washington to adopt an experience-rated system. In March of 1984, the state passed legislation that made a firm’s tax rate a function of its past use of UI, resulting in a wide range of tax rates beginning in 1985. Thus, a comparison of wages, employment, claims and denials before and after the change has the potential to provide good evidence both on tax incidence and on the effects of experience rating. More generally, this “natural experiment” provides evidence on several broader economic issues. First, many programs and employer mandates besides UI impose payroll taxes or tax-like costs on firms. The effects of these taxes or costs on wages and employment are central to the calculation of efficiency and equity consequences of policies.1 Second, many such situations involve taxes or costs that vary across firms within the same labor market, as do UI taxes. The implications of a tax vary greatly depending on whether the tax is uniform across all firms in a market or differs within markets.2 Differences in taxes across firms competing in the same labor and product markets cannot be shifted to wages or prices, and thus can be expected to have substantial employment effects. Third, experience rating imposes costs on firms that use layoffs to adjust their employment level. Thus, the evidence in this paper also has implications for the study of labor demand with adjustment costs.3 The effects of UI taxes are also an important policy issue in their own right. For several reasons, UI taxes are a potential candidate for reform. For example, with an extremely low tax base, the tax is very regressive. Also, the tax leads to substantial interfirm and interindustry subsidies.4 Perhaps most importantly, the imperfections in current experience rating systems may lead to more layoffs and higher unemployment than would occur under more complete experience rating. In fact, several authors attribute a substantial share of temporary layoff unemployment to incomplete experience rating.5 Similarly, experience rating provides an incentive for firms to be involved in the administration of benefit claims. While information on this effect of experience rating is scant, it is often argued that experience rating makes employers more likely to examine whether UI claims are justified.6 Finally, it is important to realize that the issues of incidence and layoff incentives are linked, because experience-rated increases in taxes do not provide an incentive to reduce layoffs if they can be passed on easily to workers or consumers. The experience of Washington State should also provide direct evidence on the effects other countries might expect from a decision to move to an experience-rated UI system. Although the increased administrative requirements of experience rating are sometimes mentioned as a drawback to such a shift, all fifty states have overcome these difficulties. Indeed, this feat has been accomplished despite the relatively high levels of firm and worker turnover in the U.S. While such a system might seem alien to many countries, the U.S. UI system is similar to certain existing institutions in other countries. In particular, many countries experience rate other types of insurance, such as that for workplace accidents. Other countries also impose severance payments for worker layoffs, leading to adjustment costs similar to those incurred as a result of experience rating. This “natural experiment” analysis makes several advances over previous studies. First, past work on the incidence of taxes has rarely had available longitudinal earnings that permit one to account for unobserved differences between workers. Second, past work has not had clearly identified tax changes that applied to certain readily identified groups and not to others. It has also been harder in the past to argue that any tax differences were exogenous to the outcomes of interest. Third, previous work on experience rating has often used proxies for firm incentives and differences across states that were potentially correlated with firm preferences for layoffs. The forced reintroduction of experience rating in Washington State provides a way to overcome these problems. Using this large policy change to estimate the incidence of the UI tax generally confirms the basic implications from past work. In our preferred specifications, we find that the market-level tax is largely passed on to the worker in the form of lower earnings. However, our estimates further imply that the firm can shift much less of the firm-level tax. Our estimates of changes in UI claim rates and in seasonal employment variation agree with the prediction that experience rating reduces layoffs. Also, our results for claim denial rates suggest that under experience rating, firms contest more claims. In the next section, we discuss the changes to the Washington State UI payroll tax system that have taken place over the past 15 years. Section 3 presents a brief outline of the theoretical models motivating the empirical work, while Section 4 presents the tax incidence estimates. Section 5 presents the experience rating estimates, and Section 6 then concludes.

A natural setting to examine the effects of the unemployment insurance payroll tax on wages, employment, UI claims and denials is provided by the recent experience of Washington State. Federal legislation forced Washington to adopt an experience rated system, beginning in 1985. After 13 years in which all employers paid the same UI tax rate, employers faced a wide range of tax rates, with each firm’s tax rate a function of its past use of UI. Thus, a comparison of wages and UI program and labor market outcomes before and after the change has the potential to provide good evidence on both tax incidence and the effects of experience rating. To examine the incidence of the UI tax, we use individual level administrative earnings data. Our results are broadly supportive of the predictions of the models we propose. Labor earnings always fall with higher taxes. In our preferred specifications, we find evidence that the market-level tax is largely passed on to the worker in the form of lower earnings. Further, these estimates generally indicate that the firm can shift very little of the firm-level tax. This result implies that a country making the move to an experience-rated system might see a substantial reallocation of labor across firms, even though very little overall employment loss would be expected. Such reallocation may be appropriate in the case of UI, since without experience rating, high layoff firms are subsidized by more stable firms. Of course, for the case of using variable tax rates to finance other programs and mandates, such reallocation may imply deadweight losses. To examine the effects of experience rating on firm employment decisions and involvement in benefit administration, we examine a number of aggregate time-series. The outcomes we examine are the level of UI claims and employment, the seasonality of claims and employment, UI denials for separation reasons, and nonseparation reason denials. In terms of its effect on the employment decision, we find that the reintroduction of experience rating in Washington had the expected effect on the outcomes for which we have sharp theoretical predictions: the level and seasonality of claims fell, as did the seasonality of employment. While the expected effect on employment levels is theoretically ambiguous, we obtain some significant coefficients. Specifically, we find some evidence that the employment level rose. However, the employment effects seem too large and are only present in some of the specifications, inclining us to discount these results. Our estimates imply that a country contemplating a move to full experience rating might expect UI claim rates to fall between 10 and 33 percent, and the seasonality of this rate to fall 16–40 percent. Similarly, a drop of about 11 percent in the seasonal range of employment would be predicted. These results clearly suggest that experience rating reduces UI claims and stabilizes employment. Both of these changes mean lower unemployment and, thus, likely higher social welfare. In terms of the effect of experience rating on employers’ involvement in the administration of benefits, we find strong evidence of an added incentive to “police the system” and contest invalid claims. Our results imply that experience rating increases the frequency with which UI claims are contested by employers. In Washington State, separation denials rose by 51–66 percent after the move to an experience rated system. We are unable, however, to gauge whether such an increase in denials is desirable on a cost-benefit basis. Finally, while we did not have definite predictions for nonseparation issue denials, we find some evidence of a fall.