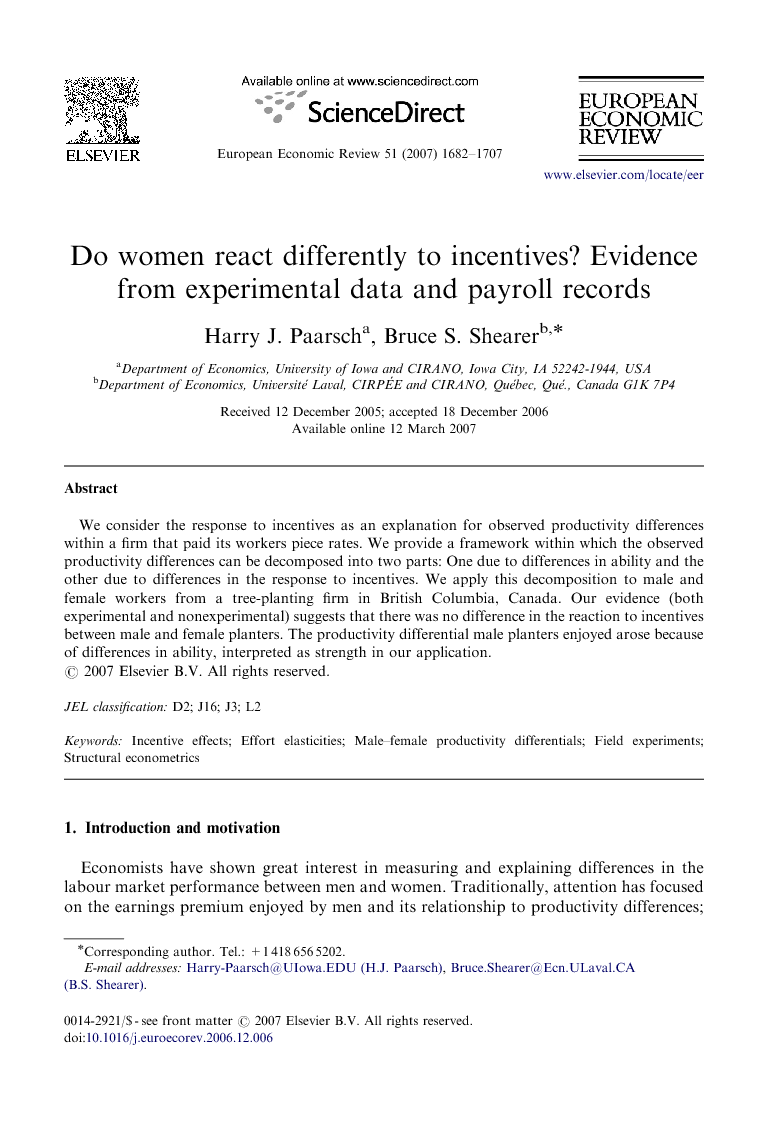 Workers differ in productive characteristics, both observed and unobserved. Controlling for these differences is important when interpreting the causes of observed differences in economic outcomes as well as potential policies to overcome those differences. We have exploited variation in incentive contracts to identify differences in worker motivation (or responses to incentives) as a possible explanation for observed productivity differentials between men and women. Our results suggest that, while workers do respond differently to incentives, no systematic difference between men and women exists in this regard; the observed productivity differentials are attributed to differences in ability, strength in our application. Our statistical conclusions are based on two separate and distinct data sets and two different econometric strategies. Using unrestricted analysis-of-variance, we analysed data from field experiments under which exogenous variation in the observed contracts is guaranteed. Using structural econometric methods, we analysed data from payroll records, controlling for endogenous variation in nonexperimental contracts. Both approaches yielded similar results. The experimental results suggest that functional-form assumptions are not driving the conclusions of the structural estimation. Note, too, that the results appear robust across time. When we re-estimated the structural model using data from payroll records gathered nearly a decade after the original sample, we found similar results. This evidence suggests that the distribution of worker types has been relatively stable over the last decade. Our results suggest that the observed differences in productivity between men and women are solely attributable to differences in physical strength in our application. In environments where physical strength is unimportant, our results suggest that productivity differentials should disappear, consistent with the findings of Gneezy et al. (2003). A complete generalization of our results would require identification of the population distribution of elasticities. At the least, this would require estimating a model that incorporated both productivity decisions and the decision to participate in the firm. The development and identification of such models remains an important area for future research based on firm-level payroll records. Finally, our results provide an interesting contrast to historical work in the sociology literature. Some sociologists have argued that men and women react differently to incentives because of differences in their family environments. Shimmin (1962) noted that young female workers in England during the 1950s and 1960s often had their earnings expropriated by their families in return for a fixed allowance. She argued that these social conventions, which did not apply to men, dampened female responses to incentive payments; see Millward (1968) for some evidence of these effects. The contrast with our results undoubtedly reflects the changing circumstances under which women participate in the labour market today.