عنوان انگلیسی
Who is on the Gorilla’s Payroll? Claims on Tourist Revenue From a Ugandan National Park
دانلود فوری مقاله + سفارش ترجمه 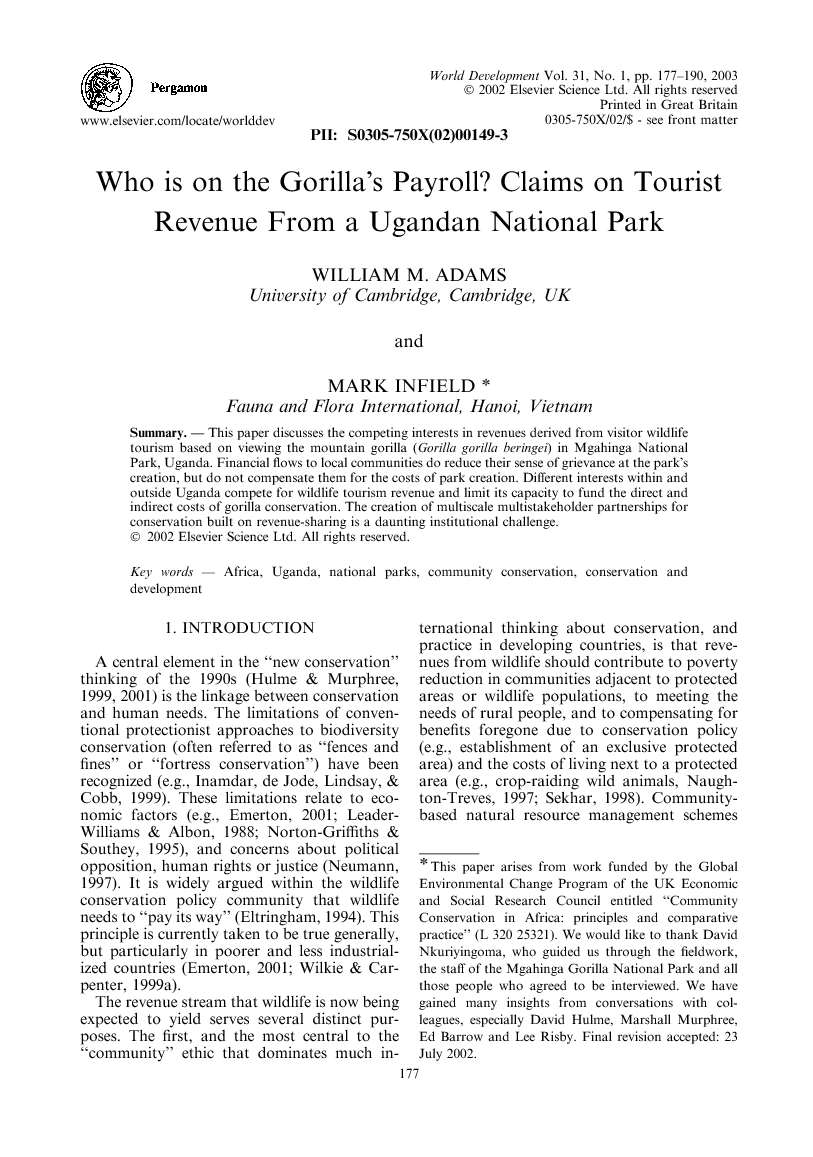 This paper discusses the competing interests in revenues derived from visitor wildlife tourism based on viewing the mountain gorilla (Gorilla gorilla beringei) in Mgahinga National Park, Uganda. Financial flows to local communities do reduce their sense of grievance at the park’s creation, but do not compensate them for the costs of park creation. Different interests within and outside Uganda compete for wildlife tourism revenue and limit its capacity to fund the direct and indirect costs of gorilla conservation. The creation of multiscale multistakeholder partnerships for conservation built on revenue-sharing is a daunting institutional challenge.

A diversity of interested parties has struggled to increase their share of gorilla tourism revenue from Mgahinga. Recognition that “communities” should not be understood as organic unified wholes has led to an emphasis on the divergent interests of multiple actors within them (Agrawal & Gibson, 1999). But, the competition for funds generated by Ugandan gorilla tourism reflects the fact that the politics of resource access and control extend well beyond the local level. It is possible to identify a wide range of interests in gorilla tourism revenue and related investment at Mgahinga, with claims being advanced on a number of different criteria at local, national and international levels (Table 4). At the local level, the simple definition of “community” in terms of current proximity would suggest that it includes people resident within parishes next to the park. This “park neighbor” principle is the commonest approach to community conservation in Africa: as McKean (1996) points out, vesting property rights in a resource’s nearest neighbors strengthens their incentives to enforce rules about access. Against proximity must be weighed historical rights, however and the different claims of those people of their descendants actually evicted from the park, or the wider community whence they came and to which they returned, or the claims of the forest’s original inhabitants, the Batwa, dispossessed long before the park was created (Table 4). Local and regional claims can also be made on other grounds. One possibility is need (with revenues focused on the most asset-poor, even if the are not those actually evicted). Another is that tourist revenues should serve development needs more broadly, either in the broader area of the park or across Kisoro District: why should the people of Mgahinga benefit from the large gorilla-related revenues when many other equally poor communities nearby. At the national scale, claims on gorilla tourism revenue might be advanced on behalf of UWA and other conservation organizations to support their mandate for conservation across the country. Not every national park has an equivalent of the gorillas that can generate substantial income to offset costs and meet the needs and aspirations of local communities. UWA itself clearly feels a need to crosssubsidize parks that cannot generate revenue, and subsidize loss-making activities (Table 4). Nationally too, the Government of Uganda might legitimately see gorilla tourism revenue as a resource to be used for the citizens of Uganda as a whole, whether offsetting the costs of conservation as a claim on the national exchequer, of directly as a source of income for welfare or development purposes (Table 4). Internationally, there are also diverse interests in gorilla tourism revenue, including the conservation authorities, citizens and governments of Rwanda and DRC (where the gorilla groups were originally habituated). International conservation organizations have a powerful interest in the management of the gorillas and the revenue derived from them, among other things, drawing donations internationally that are spent on gorilla conservation (Table 4). There are therefore many groups who could legitimately share in the potentially large revenues to be derived from gorilla tracking. Each possibility raises significant questions about fairness, justice, and need (Table 4). Logically, if wildlife is paying its way, local people should be better off with the park than without it. This is clearly not the case at Mgahinga (although a proper economic analysis of costs and benefits remains to be done). But, given the costs associated with the creation of the park on local communities, even the entire revenues from gorilla tracking would not compensate them fully. Anyway, it is unlikely that other interested parties would agree to such a distribution of the revenues. Most would argue that such a distribution was neither fair nor feasible. The conservation program at Mgahinga, and more generally the revenue-sharing program within the Uganda Wildlife Authority as a whole, have not yet begun to address these kinds of issues, or imagine the political institutions necessary to do so. The literature suggests that effective institutions must emerge from local communities and secure an equitable, transparent and reasonable engagement between local people and state (Agrawal & Gibson, 1999). They also have to embrace a whole range of political actors at local and regional scale within both government and the private sector. The challenge of building such a multiscale multisector partnership is considerable. Neither policy-makers in Uganda nor international conservation organizations that promote the philosophy that wildlife should pay its way have yet faced up to the political economic complexity of their “participatory” objectives. If institutions cannot be devised such that the mountain gorilla in Uganda can pay its way to the satisfaction of all parties, then the argument that conservation more widely can be based on this approach, let alone that it provides a “win–win” solution of “development-with-conservation” must be weak. This is especially true for the many species without the global interest that gorillas attract, and for countries or environments less suitable for tourism than Uganda’s Mgahinga volcanoes.