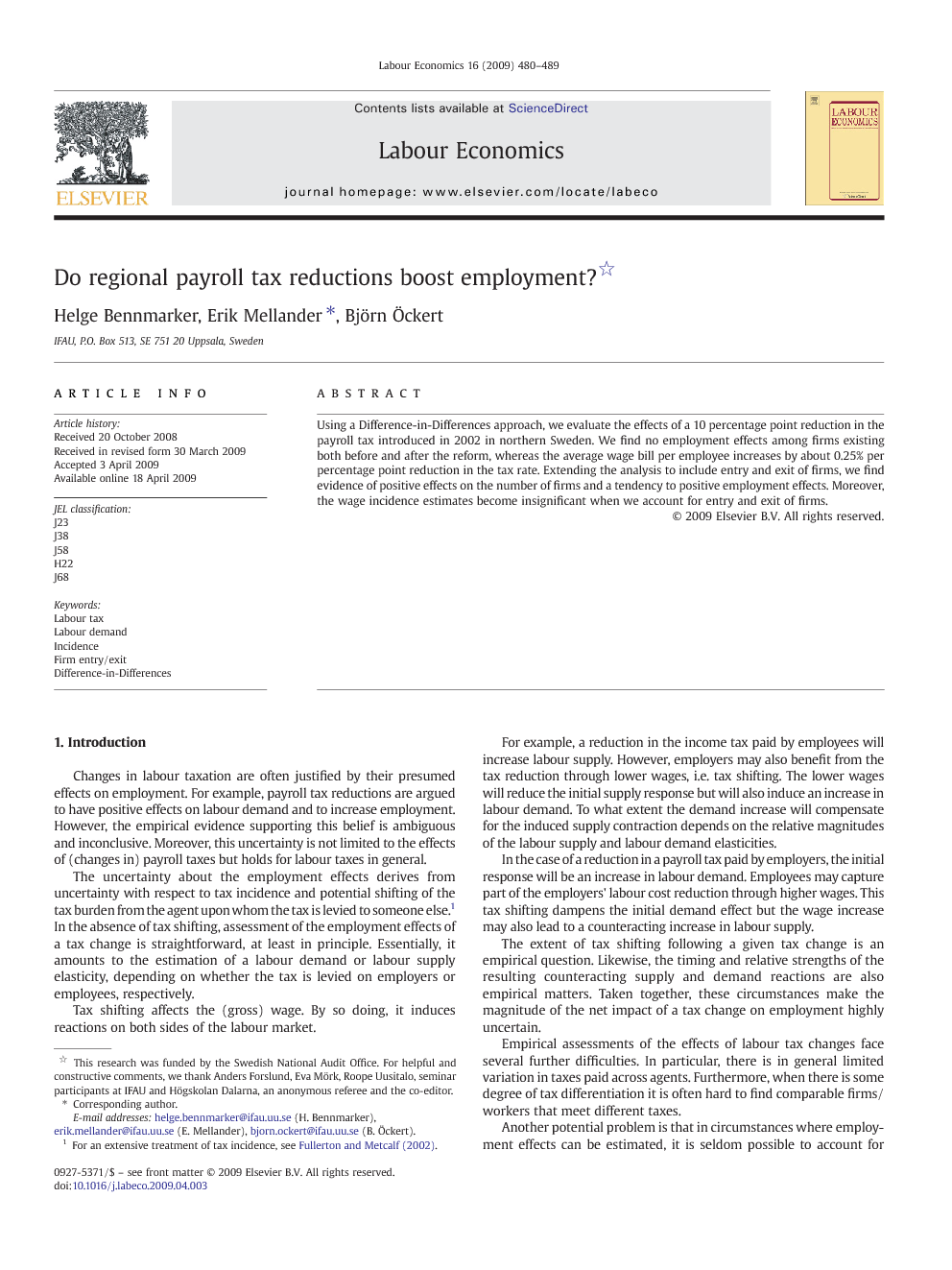 Using a Difference-in-Differences approach, we evaluate the effects of a 10 percentage point reduction in the payroll tax introduced in 2002 in northern Sweden. We find no employment effects among firms existing both before and after the reform, whereas the average wage bill per employee increases by about 0.25% per percentage point reduction in the tax rate. Extending the analysis to include entry and exit of firms, we find evidence of positive effects on the number of firms and a tendency to positive employment effects. Moreover, the wage incidence estimates become insignificant when we account for entry and exit of firms.

Changes in labour taxation are often justified by their presumed effects on employment. For example, payroll tax reductions are argued to have positive effects on labour demand and to increase employment. However, the empirical evidence supporting this belief is ambiguous and inconclusive. Moreover, this uncertainty is not limited to the effects of (changes in) payroll taxes but holds for labour taxes in general. The uncertainty about the employment effects derives from uncertainty with respect to tax incidence and potential shifting of the tax burden from the agent upon whom the tax is levied to someone else.1 In the absence of tax shifting, assessment of the employment effects of a tax change is straightforward, at least in principle. Essentially, it amounts to the estimation of a labour demand or labour supply elasticity, depending on whether the tax is levied on employers or employees, respectively. Tax shifting affects the (gross) wage. By so doing, it induces reactions on both sides of the labour market. For example, a reduction in the income tax paid by employees will increase labour supply. However, employers may also benefit from the tax reduction through lower wages, i.e. tax shifting. The lower wages will reduce the initial supply response but will also induce an increase in labour demand. To what extent the demand increase will compensate for the induced supply contraction depends on the relative magnitudes of the labour supply and labour demand elasticities. In the case of a reduction in a payroll tax paid by employers, the initial response will be an increase in labour demand. Employees may capture part of the employers' labour cost reduction through higher wages. This tax shifting dampens the initial demand effect but the wage increase may also lead to a counteracting increase in labour supply. The extent of tax shifting following a given tax change is an empirical question. Likewise, the timing and relative strengths of the resulting counteracting supply and demand reactions are also empirical matters. Taken together, these circumstances make the magnitude of the net impact of a tax change on employment highly uncertain. Empirical assessments of the effects of labour tax changes face several further difficulties. In particular, there is in general limited variation in taxes paid across agents. Furthermore, when there is some degree of tax differentiation it is often hard to find comparable firms/workers that meet different taxes. Another potential problem is that in circumstances where employment effects can be estimated, it is seldom possible to account for impacts along both the extensive margin (# employees) and the intensive margin (# hours worked). However, as pointed out by Eissa et al. (2004), if the labour tax is linear then the responses along the extensive and intensive margins will be equal in nature. The quantitatively most important employment effects of the tax change should thus occur along the extensive margin. In the literature, the most credible evaluations of the effects of labour taxes are longitudinal studies exploiting changes in regionally differentiated tax schemes. Such schemes make it possible to compare employment changes for firms/workers that are similar and located close to one another, but differ with respect to tax rates (i.e. Difference-in-Differences). In this paper, we make use of a regional reduction in a linear payroll tax, levied on employers, to estimate wage and employment effects along the extensive margin. The tax reduction amounted to 10 percentage points and took place in 2002, for firms in the northern part of Sweden. The cut decreased the payroll tax rate from 38% to 28%, up to a wage bill ceiling. By means of a Difference-in-Differences approach we compare the change in outcomes for the target area firms to the changes in firms operating in the same industries, outside the target area. The results show no employment effects among firms existing both before and after the reform, whereas a one percentage point reduction in the payroll tax rate increased the wage bill per employee by about 0.25%, i.e. partial tax shifting. When the analysis is extended to include entry and exit of firms, we find evidence of positive effects on the number of firms and a tendency to positive employment effects, while the wage incidence estimates become insignificant. The outline of the paper is as follows. Section 2 contains a description of the institutional features of the 2002 payroll tax reduction. In Section 3 we review the previous literature on labour taxes and employment, paying particular attention to tax incidence and identification strategies. Theoretical issues are considered in Section 4; using a wage bargaining framework reflecting the conditions in the Swedish labour market, we discuss factors crucial for wage setting, tax shifting, and employment effects in the context of a payroll tax cut. Section 5 contains a discussion of methodological considerations and the outcome variables used. We discuss data issues in Section 6, present our results in Section 7, and conclude in Section 8.