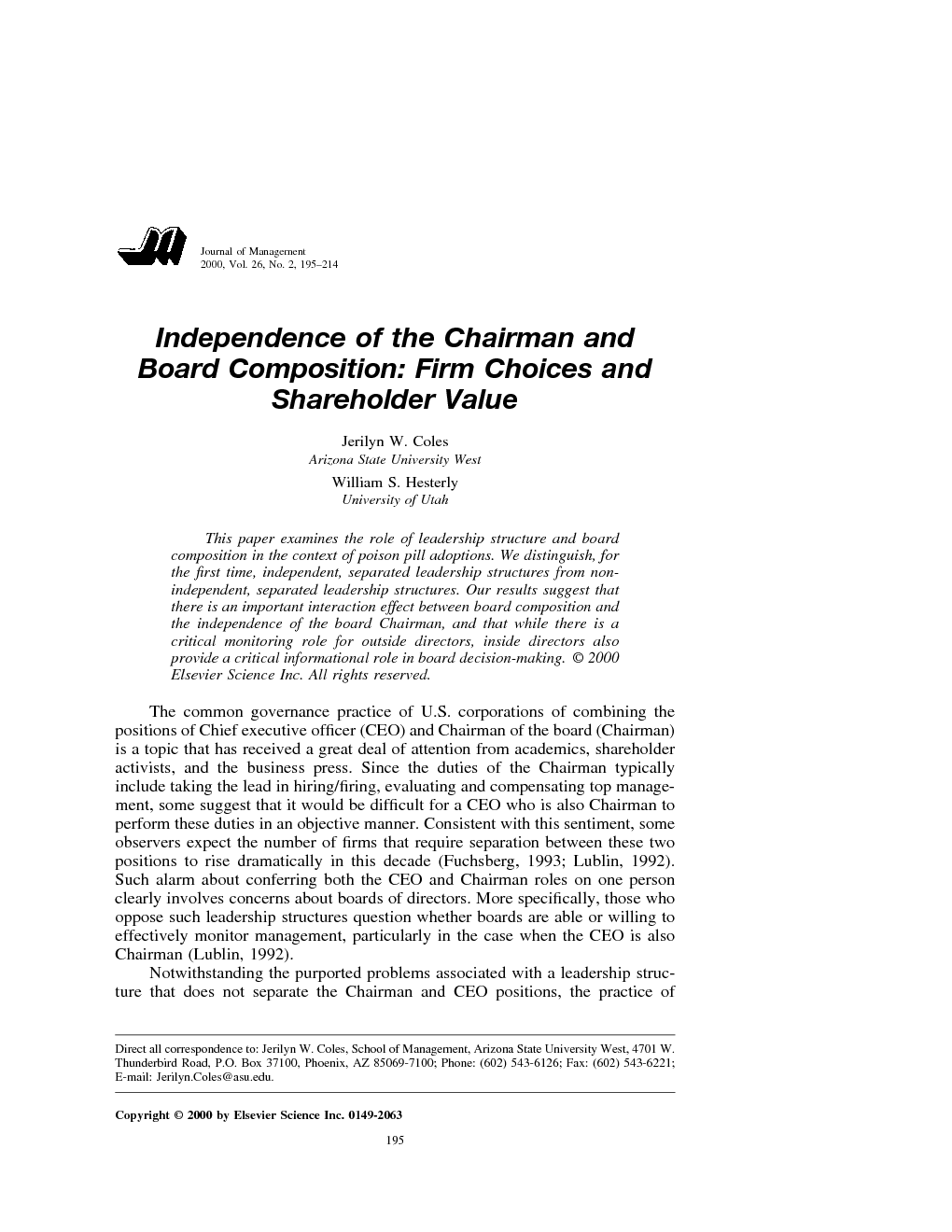 This paper examines the role of leadership structure and board composition in the context of poison pill adoptions. We distinguish, for the first time, independent, separated leadership structures from non-independent, separated leadership structures. Our results suggest that there is an important interaction effect between board composition and the independence of the board Chairman, and that while there is a critical monitoring role for outside directors, inside directors also provide a critical informational role in board decision-making. The common governance practice of U.S. corporations of combining the positions of Chief executive officer (CEO) and Chairman of the board (Chairman) is a topic that has received a great deal of attention from academics, shareholder activists, and the business press. Since the duties of the Chairman typically include taking the lead in hiring/firing, evaluating and compensating top management, some suggest that it would be difficult for a CEO who is also Chairman to perform these duties in an objective manner. Consistent with this sentiment, some observers expect the number of firms that require separation between these two positions to rise dramatically in this decade Fuchsberg 1993 and Lublin 1992. Such alarm about conferring both the CEO and Chairman roles on one person clearly involves concerns about boards of directors. More specifically, those who oppose such leadership structures question whether boards are able or willing to effectively monitor management, particularly in the case when the CEO is also Chairman (Lublin, 1992). Notwithstanding the purported problems associated with a leadership structure that does not separate the Chairman and CEO positions, the practice of combining the titles is common in the U.S. Various estimates of the incidence of this combination leadership structure range from 70 to 80 percent (e.g., Berg and Smith 1978 and Rechner and Dalton 1991). In addition, the empirical work examining the role of leadership structure in firm governance has produced results that are generally mixed. In a recent meta-analytic review of the empirical work in this area, Dalton, Daily, Ellstrand, and Johnson (1998: 272) note that, “… neither the joint, nor separate, board leadership structure has been strongly supported as enhancing firm financial performance.” These authors also comment on the literature regarding the impact of board composition on financial performance. They characterize this stream of research as an area where the evidence has been inconsistent in demonstrating a clear relationship between the composition of the board and superior financial performance of the firm. Recent studies suggest possible reasons for the lack of conclusive findings surrounding leadership structure and firm performance. The first involves the interaction of board leadership structure and board composition. In particular, we examine the use of outside board members as a governance mechanism which can be used to mitigate the difficulties associated with a leadership structure where the roles of Chairman and CEO are combined in one person. Our view, consistent with the evidence provided by Finkelstein and D’Aveni (1994) on vigilant boards, is that outsiders can provide a critical, independent perspective necessary for effectively monitoring managerial behavior. However, we also examine the role of insiders on the board interacting with leadership structure. Insiders serving on the board can provide an important source of information in making decisions about the effectiveness of firm managers, in particular when the Chairman is an outsider.

Our empirical investigation examines the changes in stockholder wealth associated with the adoption of poison pills under different governance structures. The poison pill is a security issued by the board that dramatically increases the cost that a hostile acquirer would have to pay (Davis, 1991: 584). Much of the focus on pills highlights their potential to protect firms from takeovers and thus entrench managers Davis 1991 and Mallette and Fowler 1992. However, like anti-takeover charter amendments and litigation, the pill is a mechanism that can potentially be used by a target firm in a takeover contest to extract a larger premium from the bidding firm. Because managers may potentially use pills for either their own gain, or for gain on the part of shareholders, the adoption of a poison pill provision provides a good setting for studying the impact of different types of governance arrangements on the wealth effects for shareholders. Early research in the area of wealth effects associated with the adoption of pills documented that the average market reaction to announcement of the forthcoming adoption of a poison pill is negative Malatesta and Walkling 1988 and Ryngaert 1988. Based on this early work, and consistent with the notion that the pill is typically used to entrench management, much of the governance literature that has examined poison pills has focused on firms that adopt pills versus those firms that do not adopt pills. On this basis, later studies assume that pills negatively affect stockholder wealth and then seek to explain under what conditions these defensive devices are adopted Davis 1991, Mallette and Fowler 1992 and Sassalos 1992. More recent work on the wealth effects of poison pill adoptions is consistent with our basic assumption, that some pills are used to enhance shareholder value. Most notably, Comment and Schwert (1995) update the evidence on poison pills to 1991 and find evidence consistent with earlier work that indicates a small negative, or close to zero return upon announcement of a pill. However, their results also suggest firms that have adopted poison pills receive larger takeover premiums than firms without pills (Comment & Schwert, 1995). This supports the view that under certain circumstances, the pill can be used to benefit shareholders by strengthening the bargaining position of the target, rather than to entrench management. As Comment and Schwert assert “Overall, our evidence casts doubt on the view that antitakeover measures [including poison pills]are used primarily to entrench incumbent management ( Comment & Schwert, 1995: 6).”

In our study, we find support for all four of the hypotheses we propose. We find evidence that supports the conventional wisdom that a non-independent leadership structure exacerbates the agency problem, but we also find that the relationship between leadership structure and shareholder welfare is largely contingent on board composition. The market perceives that outside directors can be important monitors of management when the Chairman of the Board is not independent of management. Specifically, we find that the relation between the announcement period market reaction to the adoption of a poison pill provision and outsider representation on the board is significant for the subsample of firms with an independent leadership structure. These results are consistent with the joint hypothesis that a non-independent structure heightens the agency problem and it is exactly when leadership structure is not independent that the monitoring and control functions of outside directors are most important and most beneficial for the shareholders. In addition, we apply new evidence to the debate on governance arrangements as substitutes or “packages.” Our view is that it is necessary to examine the interaction of these governance arrangements, since none of these choices is made in an organizational vacuum. We use the most restrictive definition of two governance mechanisms, leadership structure and outside directors, in order to gain a sense for the independence of individuals in those positions and how that can impact market reactions in a specific context. Our results point to the importance of going beyond the separated-combined leadership distinction in leadership structure and examining the Chairman’s independence from the firm’s management. While previous work in this area has generally classified the separated leadership structure as one where different individuals occupy the Chairman and CEO positions, we take this one step further to examine independence from management as the critical variable in determining the incentives of the individuals occupying those roles. Our results suggest that the independence of the Chair is a strong determinant of how the market views the adoption of a poison pill. The market takes a favorable view of firms that adopt a poison pill when they have an independent Chairman. This is the first paper we are aware of to explicitly examine these differences in leadership structure, and we conclude that this distinction is important in this context and may have significance in other contexts as well. While our results suggest that both leadership structure and board composition are important for corporate governance, our analysis does not necessarily support regulatory proposals to restrict or prohibit the use of a certain organizational structure or to require that a minimum number of board seats be reserved for outside directors. This study does not attempt to balance the potential costs of an independent structure, benefits of a combined leadership structure, costs of outside directors, or benefits of inside directors. Moreover, clearly there are many alternate organizational arrangements the firm may choose, which include, but are not limited to, the choice of leadership structure and board composition. The value of such different arrangements is likely to vary from firm to firm, according to variation in organizational, industrial and environmental factors. Different firms will have different optimal organizational structures. To the extent that regulation narrows the set of feasible contracts and organizational forms, regulation of leadership structure, board composition, or any other organizational arrangement can damage shareholders and other claimants. This study provides initial evidence on the interaction between leadership structure and board composition in the context of the wealth effects of poison pill provisions. Our study of poison pill provisions is fairly limited in scope, by virtue of the agency issues presented by this takeover defense. Thus, the contribution of this study is in a very specific context, but, clearly, a number of important issues have been raised that merit further inquiry. Research that further examines the effects of independent structures on governance is clearly required to justify any major regulatory changes on governance. There are also many other factors that figure into the governance equation, which need to be examined. The costs of different types of governance arrangements have received very little attention in the literature. In addition, contextual issues, as proposed above, could have a large impact on the choices that organizations make in determining governance. A contingency model that incorporates features of the organization and its environment would be an important step in outlining the kinds of variables that need to be examined and the kinds of relationships we might expect to find.