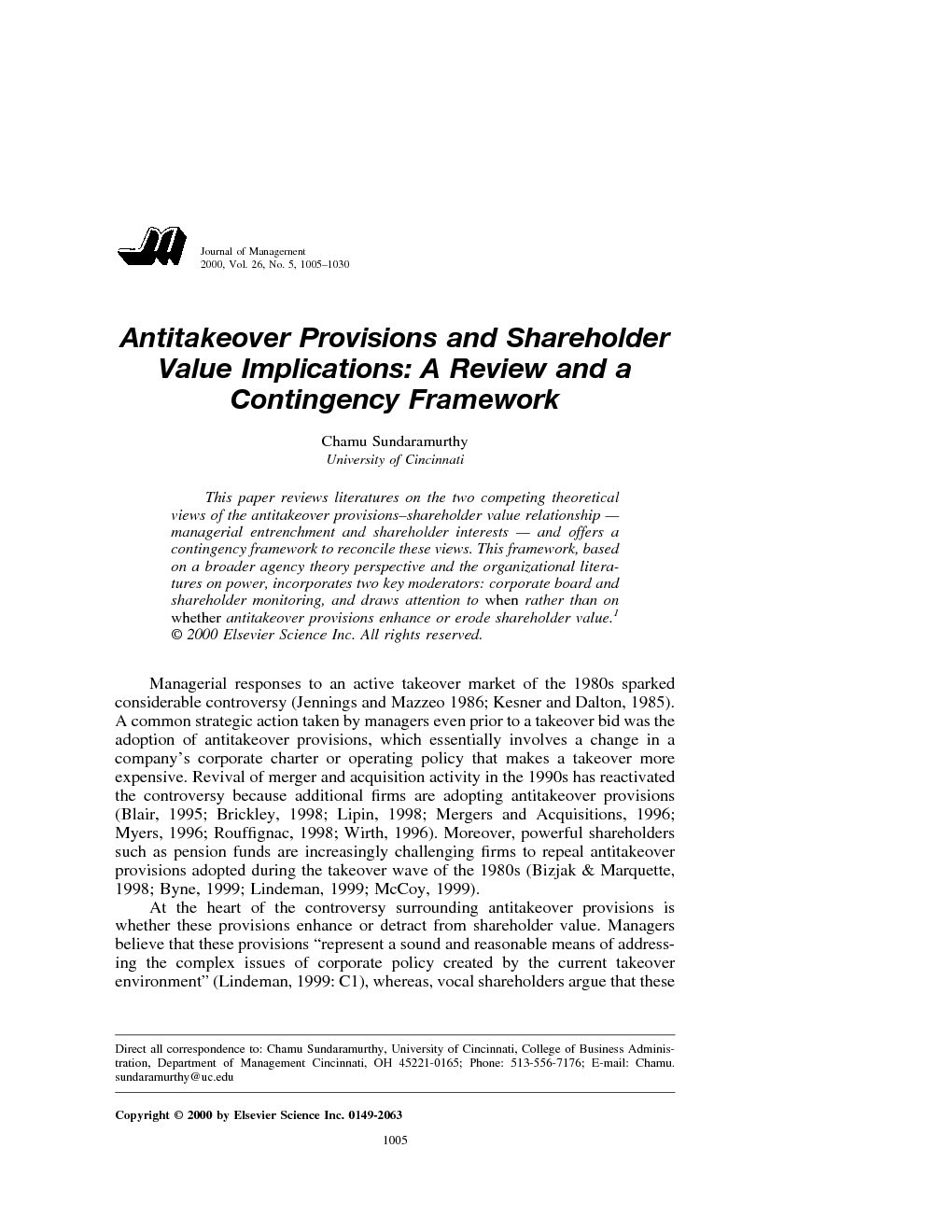 Agency theory motivates the debate regarding the impact of antitakeover provisions. According to agency theory managers are considered agents of stockholders, the owners of the corporation. These agents manage the resources of the corporation, but do not bear the wealth effects of their actions. In such a situation, managers have the opportunity and incentive to make choices and decisions regarding the use of firm resources that benefit them personally at the cost of the firm, giving rise to agency problems Berle and Means 1932, Eisenhardt 1989, Fama 1980 and Jensen and Meckling 1976. To reduce agency problems, several governance mechanisms exist; one of which is the market for corporate control Manne 1965, Moerland 1995 and Williamson 1975. If managers are inappropriately or inefficiently managing the resources of the firm, an alternative team through the market for corporate control can replace these managers. Two competing theoretical perspectives, premised on agency theory, motivate the research addressing the relationship between the adoption of antitakeover provisions and shareholder interests. One view is that antitakeover provisions benefit stockholders and is known as the “stockholder interests hypothesis” Grossman and Hart 1980, Knoeber 1986, Scherer 1988 and Stein 1988. A competing viewpoint, known as the “management entrenchment hypothesis,” is that antitakeover provisions are not in stockholders’ interest Manne 1965, Walkling and Long 1984 and Williamson 1975. According to the stockholder interests hypothesis, the adoption of antitakeover provisions would have a positive impact on firm performance, for four reasons Berkovitch and Khanna 1990, Harris 1990 and Knoeber 1986. First, it is posited that the adoption of antitakeover provisions effectively creates a long-term contract with the current management team and encourages managers to make firm-specific human capital investments. Managers unprotected from the takeover market would not have the incentive to invest in firm-specific skills because these skills may not be rewarded in the labor market. Protections such as antitakeover provisions provide managers the incentive to invest in such skills, which are critical for long-term performance of the firm. Second, if managers are protected from the market through antitakeover provisions, they are more likely to invest capital in long-term projects, which may otherwise be used for fending off takeover threats or managing current earnings Pugh et al 1992 and Stein 1988. Proponents of the shareholder interests hypothesis also emphasize that managers, without protection from the market, are less likely to make long-term capital investments because these investments often have long pay off periods. Antitakeover provisions would provide managers with the incentive to invest in long-term ventures that would enhance shareholder value in the long run. Third, it is argued that antitakeover provisions provide corporate management additional veto power in takeover situations where shareholders face prisoners’ dilemma problems — a situation where shareholders are better off acting collectively, but have the incentive to act independently against their collective interests. This veto power can enable management to negotiate better deals for their stockholders (Grossman & Hart, 1980). For instance, in a takeover situation involving asymmetric information and/or unique synergy where the value of the target firm to the bidding firm is greater than the value of the target to any other bidder, antitakeover provisions provide the target management negotiating power to be able to appropriate a larger percentage of the bilateral monopoly gains DeAngelo and Rice 1983, Harris 1990 and Mahoney and Mahoney 1993. Another scenario would involve two-tier tender offers, where the bidder offers a higher price for shares acquired in the front end and makes a lower offer for shares tendered in the back end. Even though the net aggregate value offered to all shareholders of a target firm in a two-tier offer is typically lower than that offered in an uniform bid, the structure of the offer motivates target shareholders to quickly tender their shares to secure the higher price paid in the first tier (Bebchuk, 1985). This pressure to sell, termed as “distorted choice,” “collective choice problem,” or “prisoners’ dilemma” can be curtailed through a cartelized response. Antitakeover provisions enable target managements to provide a cartelized response and hold out for a higher uniform bid DeAngelo and Rice 1983 and Stulz 1988. Finally, in the case of golden parachute agreements that compensate key executives for loss of job or status as a consequence of a change in control, some authors argue that these agreements enhance the interests of stockholders because this compensation facilitates takeovers Buchholtz and Ribbens 1994 and Lambert and Larcker 1985. It is argued that golden parachutes encourage executives to be objective in evaluating alternate takeover bids, rather than focusing on whether their skills will be valued in the merged company. According to the managerial entrenchment hypothesis, antitakeover provisions result in present-value loss for the firm because costs associated with antitakeover provisions outweigh benefits of potentially higher premium Manne 1965 and Williamson 1975. It is posited that the additional veto power provided by antitakeover provisions can protect managers from the disciplining influence of the market which can result in two types of negative managerial behavior: managers indulging in shirking and/or maintaining short time horizons. First, antitakeover provisions allow managers to “featherbed” and/or shirk their responsibilities to shareholders without the threat of being displaced. Second, proponents of the entrenchment view also indicate that protection from market forces may encourage managerial aversion to risk. This aversion to risk can result in managers rejecting risky projects that may reduce short-term earnings but enhance long-term firm value (Stein, 1988).