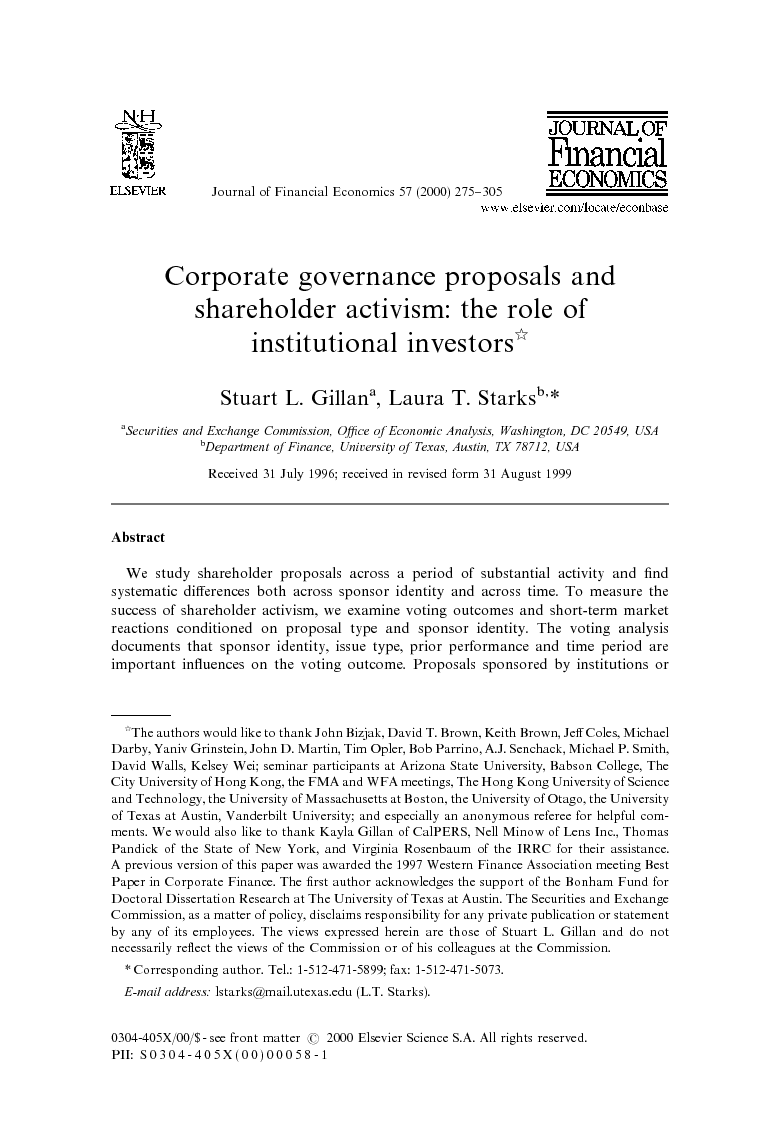 We study shareholder proposals across a period of substantial activity and find systematic differences both across sponsor identity and across time. To measure the success of shareholder activism, we examine voting outcomes and short-term market reactions conditioned on proposal type and sponsor identity. The voting analysis documents that sponsor identity, issue type, prior performance and time period are important influences on the voting outcome. Proposals sponsored by institutions or coordinated groups appear to act as substitutes gaining substantially more support than proposals sponsored by individuals. The nature of the stock market reaction, while typically small, varies according to the issue and the sponsor identity.

During the last 15 years `shareholder activism', also known as `relationship investing', has evolved to become an important characteristic of financial markets. The primary emphasis of activist shareholders has been to focus on the poorly performing firms in their portfolio and to pressure the management of such firms for improved performance, thus enhancing shareholder value. A key feature of this activism derives from the Securities and Exchange Commission (SEC). The SEC's Shareholder Proposal Rule 14a-8 allows shareholders to submit issues for inclusion in the proxy material and for subsequent presentation at the annual general meeting. If such issues are properly presented at the annual general meeting, they will be voted on. The use of shareholder proposal resolutions is often an expedient way in which activist shareholders can pursue their agendas. That is, the proxy process has provided these shareholders with a formal mechanism through which concerns about corporate governance and corporate performance can be raised. While shareholder activism by institutional investors has gained increased prominence over the last few years, there has been limited empirical work investigating the effects of this activism.1 The empirical work that has studied the issue has tended to concentrate on the activities of a particular institutional investor – Smith (1996),Huson (1997) and Nesbitt (1994) focus on the California Public Employees Retirement System (CalPERS); Carleton et al. (1998) focus on TIAA-CREF; Strickland et al. (1996) study a coalition of small investors – the United Shareholders’ Association (USA); or specific proposals, e.g., poison pills (Bizjak and Marquette, 1998) and executive compensation (Johnson and Shackell, 1997). More recently, researchers have focused on the activities of a broader set of institutional shareholder activists, for example, Del Guercio and Hawkins (1998),Opler and Sokobin (1995), and Wahal (1996). In this paper we study the activities of several different types of activist investors, with an interest in how other shareholders react to the type of proposal and the identity of the proposal sponsor. We measure shareholder reaction through their votes and the change in stock price. We study the effects of proposals sponsored by public pension funds, coordinated groups of investors, and individual investors. Most importantly, we examine how institutional shareholder activism through proxy proposals evolved from its beginnings in the latter part of the 1980s until its diminution into an adversarial process in 1994. In the next section, we discuss shareholder activism with a particular focus on the growing role of institutional investor and coordinated shareholder actions. We investigate the effectiveness of this activism through an analysis of 2042 corporate governance proposals over the 1987–1994 time period. These proxy proposals, as described in Section 3, exhibit systematic differences in the types of governance proposals put forth by institutional versus individual investors. In addition, the issues addressed by the proposals have changed over the sample period. In Section 4, we provide a measure of investor reaction to these proposals by analyzing the proxy voting results. Despite the fact that shareholder proposals typically do not receive majority approval, we find that over the sample period there has been an increase in the number of votes cast in favor of these proposals. Further, those proposals sponsored by institutions or through coordinated activities receive significantly more favorable votes than those sponsored by independent individuals or religious organizations. Our regression analysis shows that after controlling for the firm's prior performance, the voting outcome is strongly associated with sponsor identity, the issue addressed, the percentage of institutional ownership and whether the proposal was submitted later in the sample period. In Section 5, we provide an alternate measure of investor reaction by examining the short-term stock price performance around the release of information that firms have been targeted with shareholder proposals. While overall we find little market reaction to the proxy proposals, we do find that the nature of the stock market reaction varies according to the issue and the sponsor identity. Finally, we provide our conclusions in Section 6.

In this paper we have examined the effectiveness of shareholder activism by institutional and individual investors. The data on shareholder activism consists of 2042 shareholder proposals submitted at 452 companies from 1987 to 1994. All of these proxy proposals were related to the governance of the corporation. We employ two measures of the effectiveness of this shareholder activism: the voting outcomes on the proxy proposals and the stock market reaction to the proposals. Our evidence suggests that shareholder voting and stock market reaction depend on the issues addressed by the proposals as well as the identity of the proposal sponsor. Proposals sponsored by the so-called gadflys (active individual investors) garner fewer votes and are associated with a slight positive impact on stock prices. In contrast, proposals sponsored by institutional investors (i.e., public pension funds) or coordinated groups of investors receive significantly more votes and appear to have some small but measurable negative impact on stock prices. In general, we find that noncoordinated activism has been relatively ineffective when measured by voting outcomes. We find slightly more success in the activism of institutional investors and coordinated groups. The voting outcomes indicate that, while the percentage of votes cast in favor of the proposals averaged less than a majority, the percentage nonetheless increased over the sample period. Moreover, with the average level of voting support for such votes proposals approaching 35%, these activists have a stronger basis when negotiating with corporate management. It would also appear that shareholders make distinctions on the basis of proposals and sponsors in the voting process. Proposals often sponsored by the so-called `gadfly’ investors such as executive compensation, director ownership, and the limitation of director terms receive low voting support, and thus are not perceived by other shareholders as being effective enough in pressuring corporate management to pursue reform. The similarity of issues and voting results across institutional investors and coordinated groups suggests that they act as substitutes in applying pressure to managers.