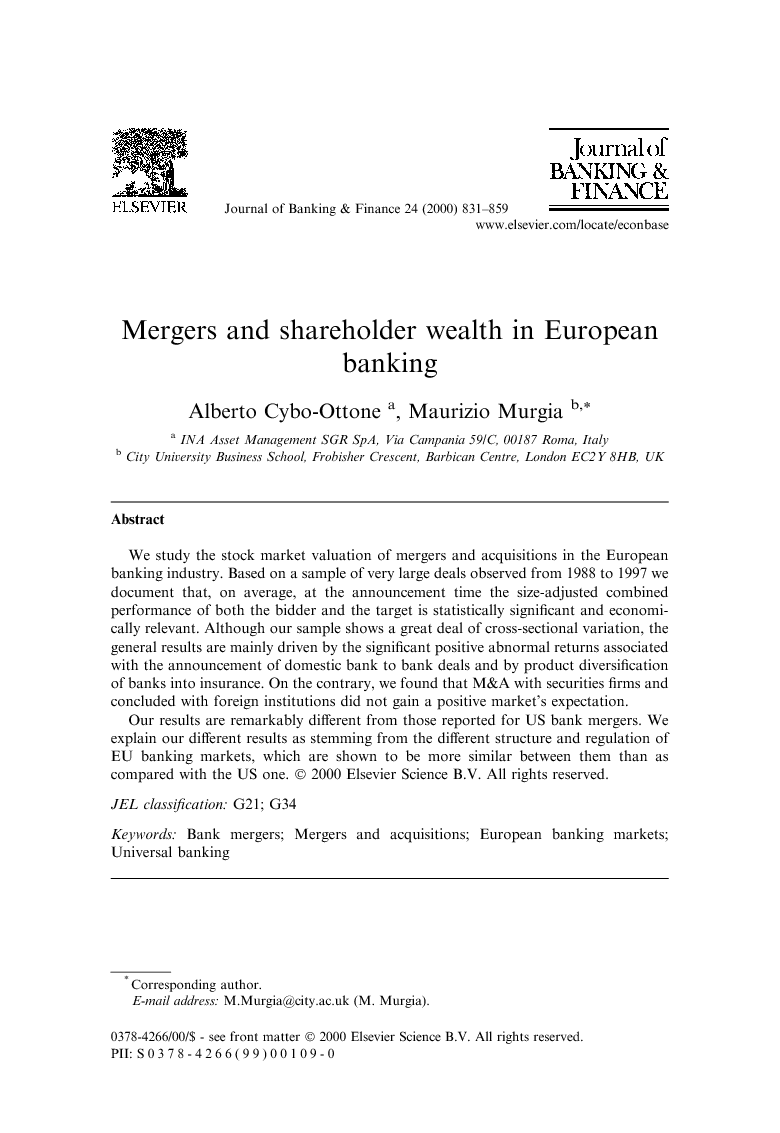 We study the stock market valuation of mergers and acquisitions in the European banking industry. Based on a sample of very large deals observed from 1988 to 1997 we document that, on average, at the announcement time the size-adjusted combined performance of both the bidder and the target is statistically significant and economically relevant. Although our sample shows a great deal of cross-sectional variation, the general results are mainly driven by the significant positive abnormal returns associated with the announcement of domestic bank to bank deals and by product diversification of banks into insurance. On the contrary, we found that M&A with securities firms and concluded with foreign institutions did not gain a positive market's expectation. Our results are remarkably different from those reported for US bank mergers. We explain our different results as stemming from the different structure and regulation of EU banking markets, which are shown to be more similar between them than as compared with the US one.

This paper studies the stock market valuation effects of mergers and acquisitions in European banking between 1988 and 1997. Over the last two decades, the banking and financial services industry has experienced profound changes. One of the most important effects of this restructuring process has been an increase in consolidation activity. From 1987 to 1997, the value of mergers and acquisitions in the world financial industry has reached nearly 1.4 trillions of US$ (e.g. The Economist, 1997). At the beginning of this period, US deals dominated the scene but, more recently, M&As in European banking have started to catch up. After averaging 15 deals a year up to 1985, European M&A deals, including minority deals, jumped to a new level of 50–90 deals per year between 1986 and 1994 (e.g. Economic Research Europe, 1996, par. 4.3.4). According to Securities Data Corporation, between January 1991 and April 1996 the value of European deals totaled 77.9 billion $US compared with 193.6 in the US. To date, most of the available knowledge on M&As in banking comes from scrutiny of the US market. Pilloff and Santomero (1998) review the voluminous empirical literature on the US experience. The authors point to the following paradox: despite academic studies showing no significant gains in value or performance from bank mergers, the number and value of new mergers in the US continues to grow unabated! European M&A deals, the focus of this paper, while being important, have however attracted much less scrutiny. This is due both to the lead of M&A activity in the US market and to the huge methodological difficulties of studying the fragmented European banking market (e.g. Leonard et al., 1992). However, such an analysis of the European experience is warranted for a number of reasons. Whatever past experience is available would be extremely useful for players who are still planning to start a major M&A deal or campaign. In this respect, the US experience cannot be automatically applied to the European environment where one can observe product expansion in a somewhat less restricted environment. As compared with the US market, the universal banking structure, that characterize Europe, implies that there are less stringent limits to product market diversification from commercial banking into investment banking. Bancassurance is also a European phenomenon as regulations allow EU banks to own insurance subsidiaries and to perform in direct distribution of insurance products in most jurisdictions; there, major limits to banking/insurance only remain for direct bank underwriting of policies. On the other hand, US legislation is much more restrictive both on cross ownership and cross selling between banking and insurance (e.g. Borio and Filosa, 1994). Further, the limitations on interstate expansion in the US, embedded in the McFadden Act, might inhibit geographic and scale expansion of American banks as compared to their European counterparts.

This paper provides the first analysis of the stock market valuation of the largest mergers and acquisitions between banks and financial institutions that have been announced from 1988 to 1997 in 14 European markets. Our results document that there is a positive and significant increase in value for the average merger at the time of the deal's announcement. This finding is not consistent with the bulk of empirical studies conducted in the US banking market. When we analyzed the combined abnormal returns of bidder and target for different types of deals, we uncover that there is a positive and significant market reaction around the short period of eleven days for the following type of transactions: commercial banks; focused transactions; combinations with insurance companies; domestic transactions; relatively small deals in our sample, which is anyway biased toward large size. On the contrary, we found that M&A with securities firms and concluded with foreign institutions did not gain a positive market's expectation. The evidence we presented for very large deals is statistically weak, and it is probably linked to the negative market reaction to the acquiring bank. Our research on European bank mergers reaches different conclusions from those of many related studies conducted in the US banking industry. We explain our different results as stemming from the different structure and regulation of EU banking markets, which are shown to be more similar between them than as compared with the US one.