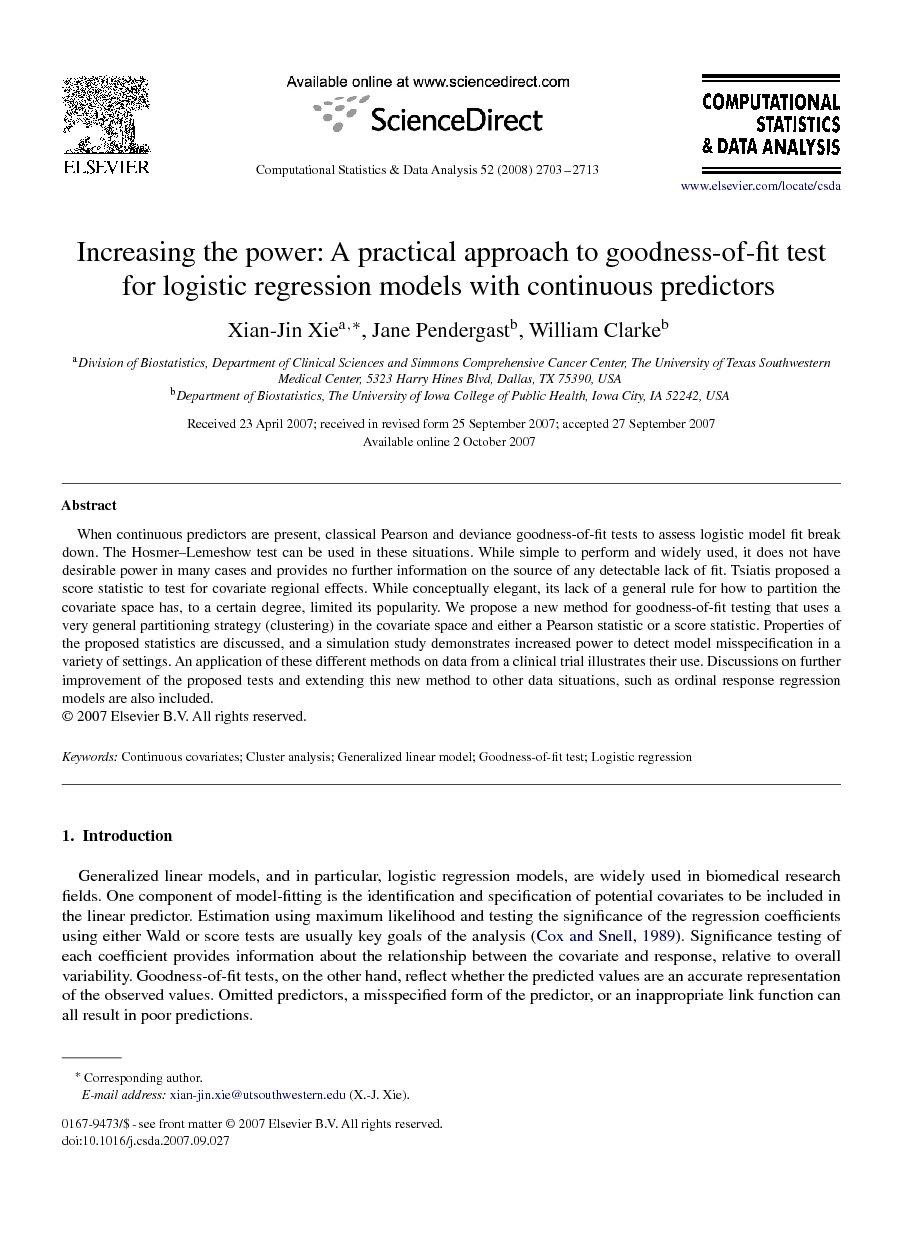 When continuous predictors are present, classical Pearson and deviance goodness-of-fit tests to assess logistic model fit break down. The Hosmer–Lemeshow test can be used in these situations. While simple to perform and widely used, it does not have desirable power in many cases and provides no further information on the source of any detectable lack of fit. Tsiatis proposed a score statistic to test for covariate regional effects. While conceptually elegant, its lack of a general rule for how to partition the covariate space has, to a certain degree, limited its popularity. We propose a new method for goodness-of-fit testing that uses a very general partitioning strategy (clustering) in the covariate space and either a Pearson statistic or a score statistic. Properties of the proposed statistics are discussed, and a simulation study demonstrates increased power to detect model misspecification in a variety of settings. An application of these different methods on data from a clinical trial illustrates their use. Discussions on further improvement of the proposed tests and extending this new method to other data situations, such as ordinal response regression models are also included.

We proposed to use cluster analysis on covariates in partitioning observations and to use either a Pearson or score statistic to test goodness-of-fit of logistic regression models with continuous covariates. Simulation studies have shown favorable properties as compared to currently widely used Hosmer–Lemeshow test. The proposed tests hold closely to nominal significance level and have demonstrated consistent higher power in all the simulated model scenarios. The two proposed tests also outperform Pulkstenis–Robinson tests, except in the situations where both categorical and continuous covariates are present and an interaction term is omitted. Application of all five tests on the motivating example study indicates that the model fit decisions based on the two proposed tests are in agreement with current clinical knowledge and that the Hosmer–Lemeshow test and the Pulkstenis–Robinson tests do not show ample power. Based on these studies, we propose that the two proposed tests be used for testing logistic regression model fit when continuous covariates are present. When the fitted model has both continuous and categorical covariates, the test of Pulkstenis–Robinson is also recommended. Another advantage of the two proposed tests over the Hosmer–Lemeshow test is that when the test indicates a lack of fit, the Hosmer–Lemeshow test does not provide information about where the model does not fit, while the two proposed tests automatically identify what types of subjects are not modeled well. Improvement and future work on the two proposed tests include the following: First, when both continuous and categorical covariates are present, instead of treating dichotomous and ordinal covariates as interval data (when applying cluster analysis), one another option is to combine our proposal and Pulkstenis and Robinson's method. In step one, all the observations are grouped into a small number of mutually exclusive bins by cluster analysis based on all the continuous covariates only; and in step two, each of these bins is further partitioned by covariate patterns determined by only the categorical covariates. This may further improve the power of the two proposed tests. Second, further evaluate the choice of number of portioned groups G and the method of clustering. In this study, we use the ad hoc rule to determine G and only apply Ward's method in clustering observations. Further study may result in a better or optimal rule in determining G and choice of clustering method. Third, find a better approximation to the Pearson chi-square statistic. Although our recommendation for determining the degrees of freedom for the approximated Pearson chi-square statistic works well in our study, it appears to be somewhat conservative. More studies are warranted for optimal approximation for the Pearson chi-square statistic. Fourth, simulation study evaluation on performance of the two proposed tests on ordinal data and on correlated data will be carried out. Fifth, extensions of the two proposed tests to multinomial data (generalized logit model) are reasonably straightforward, but the issue determining the asymptotic distribution of test statistics is still present.