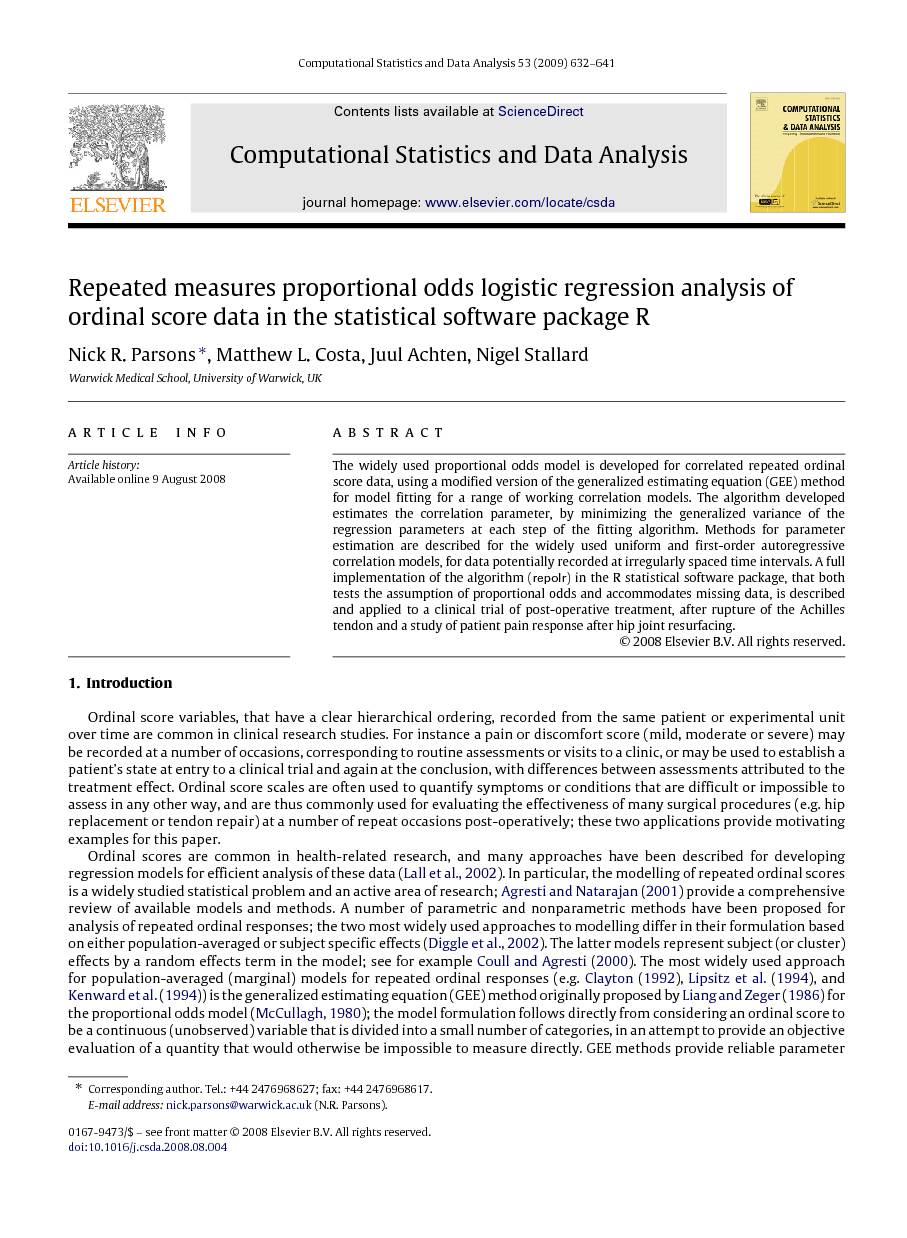 The widely used proportional odds model is developed for correlated repeated ordinal score data, using a modified version of the generalized estimating equation (GEE) method for model fitting for a range of working correlation models. The algorithm developed estimates the correlation parameter, by minimizing the generalized variance of the regression parameters at each step of the fitting algorithm. Methods for parameter estimation are described for the widely used uniform and first-order autoregressive correlation models, for data potentially recorded at irregularly spaced time intervals. A full implementation of the algorithm (repolr) in the R statistical software package, that both tests the assumption of proportional odds and accommodates missing data, is described and applied to a clinical trial of post-operative treatment, after rupture of the Achilles tendon and a study of patient pain response after hip joint resurfacing.

Ordinal score variables, that have a clear hierarchical ordering, recorded from the same patient or experimental unit over time are common in clinical research studies. For instance a pain or discomfort score (mild, moderate or severe) may be recorded at a number of occasions, corresponding to routine assessments or visits to a clinic, or may be used to establish a patient’s state at entry to a clinical trial and again at the conclusion, with differences between assessments attributed to the treatment effect. Ordinal score scales are often used to quantify symptoms or conditions that are difficult or impossible to assess in any other way, and are thus commonly used for evaluating the effectiveness of many surgical procedures (e.g. hip replacement or tendon repair) at a number of repeat occasions post-operatively; these two applications provide motivating examples for this paper. Ordinal scores are common in health-related research, and many approaches have been described for developing regression models for efficient analysis of these data (Lall et al., 2002). In particular, the modelling of repeated ordinal scores is a widely studied statistical problem and an active area of research; Agresti and Natarajan (2001) provide a comprehensive review of available models and methods. A number of parametric and nonparametric methods have been proposed for analysis of repeated ordinal responses; the two most widely used approaches to modelling differ in their formulation based on either population-averaged or subject specific effects (Diggle et al., 2002). The latter models represent subject (or cluster) effects by a random effects term in the model; see for example Coull and Agresti (2000). The most widely used approach for population-averaged (marginal) models for repeated ordinal responses (e.g. Clayton (1992), Lipsitz et al. (1994), and Kenward et al. (1994)) is the generalized estimating equation (GEE) method originally proposed by Liang and Zeger (1986) for the proportional odds model (McCullagh, 1980); the model formulation follows directly from considering an ordinal score to be a continuous (unobserved) variable that is divided into a small number of categories, in an attempt to provide an objective evaluation of a quantity that would otherwise be impossible to measure directly. GEE methods provide reliable parameter estimates in most situations, however, a number of alternative GEE methods have been suggested that overcome some of the pitfalls in estimation of the correlation parameters that occur in many of the most widely used methods (Chaganty, 1997 and Parsons et al., 2006). Commercial software for model fitting using the GEE method is now widely available (Horton and Lipsitz, 1999), although implementation for ordinal regression models is often difficult, even for an experienced user. In practice in many clinical trials, information in the data is often not used efficiently, and ordinal scores are treated as if they were continuous variables for the purposes of analysis (Forrest and Andersen, 1986, Lavalley and Felson, 2002 and Jakobsson, 2004); the main reason for this is the lack of available, simple to use, statistical tools. In order to address this perceived problem we have generalized and extended the algorithm originally suggested by Parsons et al. (2006), which they show to be particularly robust and reliable, for model parameter estimation and analysis of typical clinical trials data and written functions for routine implementation and distribution in the freely available statistical software R (R Development Core Team, 2007). We extend the methodology, which was previously only available for the very limited case of complete ordinal scores recorded at evenly spaced time intervals with an assumed first-order autoregressive correlation model, in a number of ways that will facilitate more widespread use for analysis of data from clinical trials. To achieve this, we develop correlation models that accommodate positively correlated repeated ordinal scores within subjects recorded at any desired spacing of time intervals and, as data from clinical follow-up are in general incomplete due to patient drop-out, we modify the algorithm to allow missing data in either the response or explanatory variables, and also incorporate a formal test of the proportional odds assumption into the algorithm. We introduce the proportional odds model in Section 2.1, describe an algorithm for parameter estimation in Section 2.3 and give examples of correlation models appropriate for clinical trial data in Section 2.4. Section 3 describes R functions that implement the GEE method, and other available methods in R for modelling ordinal score data, and Section 4 demonstrates model fitting for two example sets of data; first a surgical trial of post-operative treatment after rupture of the Achilles tendon and second, a study of patient pain response after hip joint resurfacing.