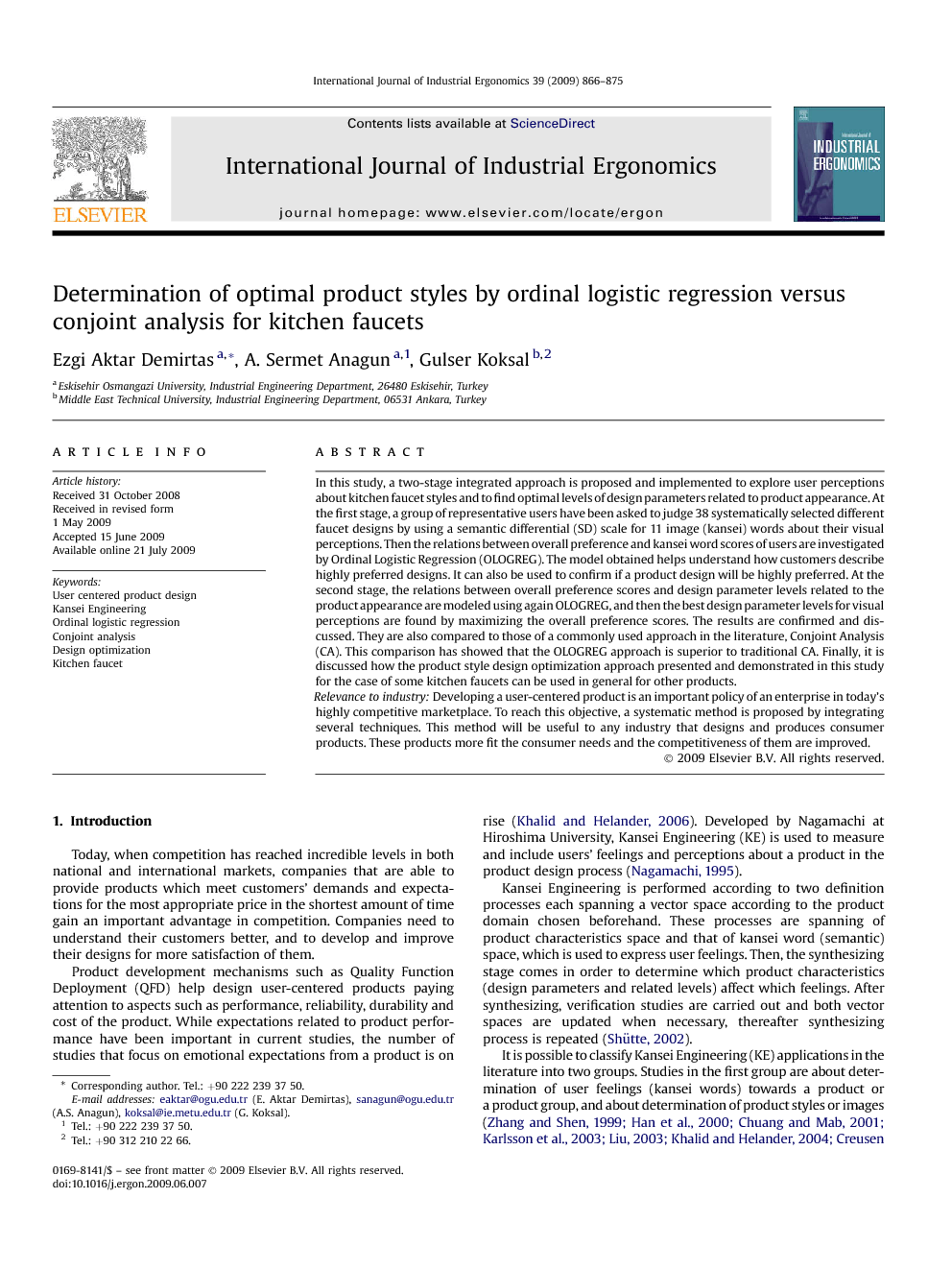 In this study, a two-stage integrated approach is proposed and implemented to explore user perceptions about kitchen faucet styles and to find optimal levels of design parameters related to product appearance. At the first stage, a group of representative users have been asked to judge 38 systematically selected different faucet designs by using a semantic differential (SD) scale for 11 image (kansei) words about their visual perceptions. Then the relations between overall preference and kansei word scores of users are investigated by Ordinal Logistic Regression (OLOGREG). The model obtained helps understand how customers describe highly preferred designs. It can also be used to confirm if a product design will be highly preferred. At the second stage, the relations between overall preference scores and design parameter levels related to the product appearance are modeled using again OLOGREG, and then the best design parameter levels for visual perceptions are found by maximizing the overall preference scores. The results are confirmed and discussed. They are also compared to those of a commonly used approach in the literature, Conjoint Analysis (CA). This comparison has showed that the OLOGREG approach is superior to traditional CA. Finally, it is discussed how the product style design optimization approach presented and demonstrated in this study for the case of some kitchen faucets can be used in general for other products. Relevance to industry: Developing a user-centered product is an important policy of an enterprise in today's highly competitive marketplace. To reach this objective, a systematic method is proposed by integrating several techniques. This method will be useful to any industry that designs and produces consumer products. These products more fit the consumer needs and the competitiveness of them are improved.

Today, when competition has reached incredible levels in both national and international markets, companies that are able to provide products which meet customers' demands and expectations for the most appropriate price in the shortest amount of time gain an important advantage in competition. Companies need to understand their customers better, and to develop and improve their designs for more satisfaction of them. Product development mechanisms such as Quality Function Deployment (QFD) help design user-centered products paying attention to aspects such as performance, reliability, durability and cost of the product. While expectations related to product performance have been important in current studies, the number of studies that focus on emotional expectations from a product is on rise (Khalid and Helander, 2006). Developed by Nagamachi at Hiroshima University, Kansei Engineering (KE) is used to measure and include users' feelings and perceptions about a product in the product design process (Nagamachi, 1995). Kansei Engineering is performed according to two definition processes each spanning a vector space according to the product domain chosen beforehand. These processes are spanning of product characteristics space and that of kansei word (semantic) space, which is used to express user feelings. Then, the synthesizing stage comes in order to determine which product characteristics (design parameters and related levels) affect which feelings. After synthesizing, verification studies are carried out and both vector spaces are updated when necessary, thereafter synthesizing process is repeated (Shütte, 2002). It is possible to classify Kansei Engineering (KE) applications in the literature into two groups. Studies in the first group are about determination of user feelings (kansei words) towards a product or a product group, and about determination of product styles or images (Zhang and Shen, 1999, Han et al., 2000, Chuang and Mab, 2001, Karlsson et al., 2003, Liu, 2003, Khalid and Helander, 2004, Creusen and Schoormans, 2005 and Hsiao and Chen, 2006). Studies in the second group are about determination of kansei words that affect users' overall preferences, and relations between words and design parameter levels. Researchers have generally used Linear Regression (LREG) method in determining kansei words that are related to users' overall preferences (Zhang and Shen, 1999, Hsu et al., 2000 and Chuang et al., 2001). They have also used statistical methods such as Correlation and Regression Analysis (Jindo and Hirasago, 1997, Nakada, 1997, Kwon, 1999, Yun et al., 1999 and Kim et al., 2003) and Conjoint Analysis (CA) (Hsu et al., 2000 and Chuang et al., 2001) to determine relations between the overall preferences/words and the design parameter levels. Furthermore, several researchers have used Artificial Neural Networks – ANN (Hsiao and Huang, 2002 and Lai et al., 2006), Fuzzy ANN (Hsiao and Tsai, 2005) Grey Relational Analysis and ANN (Lai et al., 2005) for the same purpose. There exist some drawbacks of the methods used in the literature for modeling relations between overall preferences and kansei words, or design parameter levels. Some of these drawbacks are due to the SD Scale, which is developed by Osgood et al. (1957) to collect data for the analysis. Products are typically evaluated on a scale of 1–5, 1–7, or 1–9 according to negative–positive word pairs. Since such data are of categorical nature, using statistical methods such as LREG in the analysis is inappropriate. In order to use LREG analysis, the independent variable, overall preference is expressed as a continuous one by taking the averages of different users' overall preferences and likewise averages of kansei word scores on the basis of the product. However, it is not appropriate to take the averages of data measured on an ordinal scale. Besides, the use of average values leads to data loss. Furthermore, it is observed that while effects of kansei words and design parameters on overall preferences are investigated in the current studies, the interaction effects of them are neglected, or cannot be calculated (as in CA). On the other hand, methods such as ANN do not provide a model that show which kansei words or design parameters affect overall preferences of the product. Furthermore, these modeling approaches have their own problems such as overfitting. In this study, OLOGREG is used to determine relations between overall preferences and kansei words, or design parameters. OLOGREG can be used when dependent variables are measured on an ordinal scale, and it allows taking interaction effects into account. Recently, Barone et al. (2007) have used a weighted OLOGREG procedure to improve CA results. As a result they have obtained significant design parameters for each kansei word more accurately compared to traditional CA based on LREG. However, this study uses OLOGREG and design optimization based on its models, completely as an alternative to CA. Another study, encountered in literature on the use of OLOGREG is by Lanzotti and Tarantino (2007), which only suggests that OLOGREG can be utilized in Kansei Engineering studies. Including these two studies, the literature does not include a thorough development of OLOGREG use and its comparison to CA in the literature, to the best of our knowledge. In this study, synthesizing stage is performed after spanning kansei word and product characteristics spaces based on a chosen kitchen faucet domain. Synthesizing is composed of two stages. At the first stage, relations between kansei words and overall preference scores are studied using LREG and OLOGREG, and then the results are compared. The OLOGREG model obtained at this stage gives clues as to how the most preferred product styles are described by the users and the image characteristics of these products. This model can also be used to confirm if a product design will be highly preferred by customers. At the second stage, relations between overall preference scores and design parameter levels are studied using CA and OLOGREG, and the optimal design parameter levels are determined. Finally, the results are verified. They show that the preference probabilities of design options proposed by OLOGREG model are higher than those proposed by CA. Furthermore, the results of the verification studies show that product styles preferred by the users are also in accordance with the OLOGREG model obtained at the first stage.

In this study, it is aimed to show that OLOGREG is an effective and more successful approach than CA to model relations between overall preference of a product (based on visual perceptions) and kansei words to describe it, or design parameter levels. It is also aimed to present an approach for finding and confirming optimal product style parameter levels based on such OLOGREG models. As the case study some kitchen faucet styles have been considered. At the first stage of the study, some faucet styles selected according to a statistical experimental design are used to model the relations between overall preference of a style and some kansei words that are used to describe it. The models of the relations developed by OLOGREG have been more effective compared to those developed by CA. Here, CA has a major drawback of not being able to model possible interactions between the kansei words, and losing information due to averaging of the data. OLOGREG, on the other hand, may require more expertise in modeling especially for those who are accustomed to using CA in similar cases. At the second stage, OLOGREG models of the relations between overall preferences of alternative product styles and their corresponding design parameter levels are developed. The optimal product styles are found by maximizing these overall preference scores. Verification studies based on visual perceptions of 35 users have confirmed the OLOGREG results and their superiority over CA results. Here, the model developed at the first stage can be used as a quick way of confirming the optimal product style recommendations. The modeling and optimization approach developed and demonstrated in this study for kitchen faucets can be adapted to any product design especially concerning the product styles or visual appearances. In applications of the approach, the following points should be given special care: selection of proper customer (user) segments; thorough understanding of customer needs and expectations; determination of kansei word pairs in the native language of the customers; selection of a representative group of (potential or real) customers for questionnaire applications; selection of design parameter levels without being influenced too prematurely by cost and technology limitations; determining product style alternatives using fractional factorial designs; preprocessing of the collected data for missing values, inconsistencies and correlations; proper interpretation and confirmation of the results. The product styles determined in this manner should be advanced into detailed designs considering cost, technology, performance, reliability, durability and safety. Innovative solutions that preserve the recommended styles, but yield high performance at low cost should be sought for. In any case, style change requests found necessary at these other product development stages can be evaluated and their visual perceptions can be confirmed as sufficiently high by using the models developed by the proposed approach of this study.