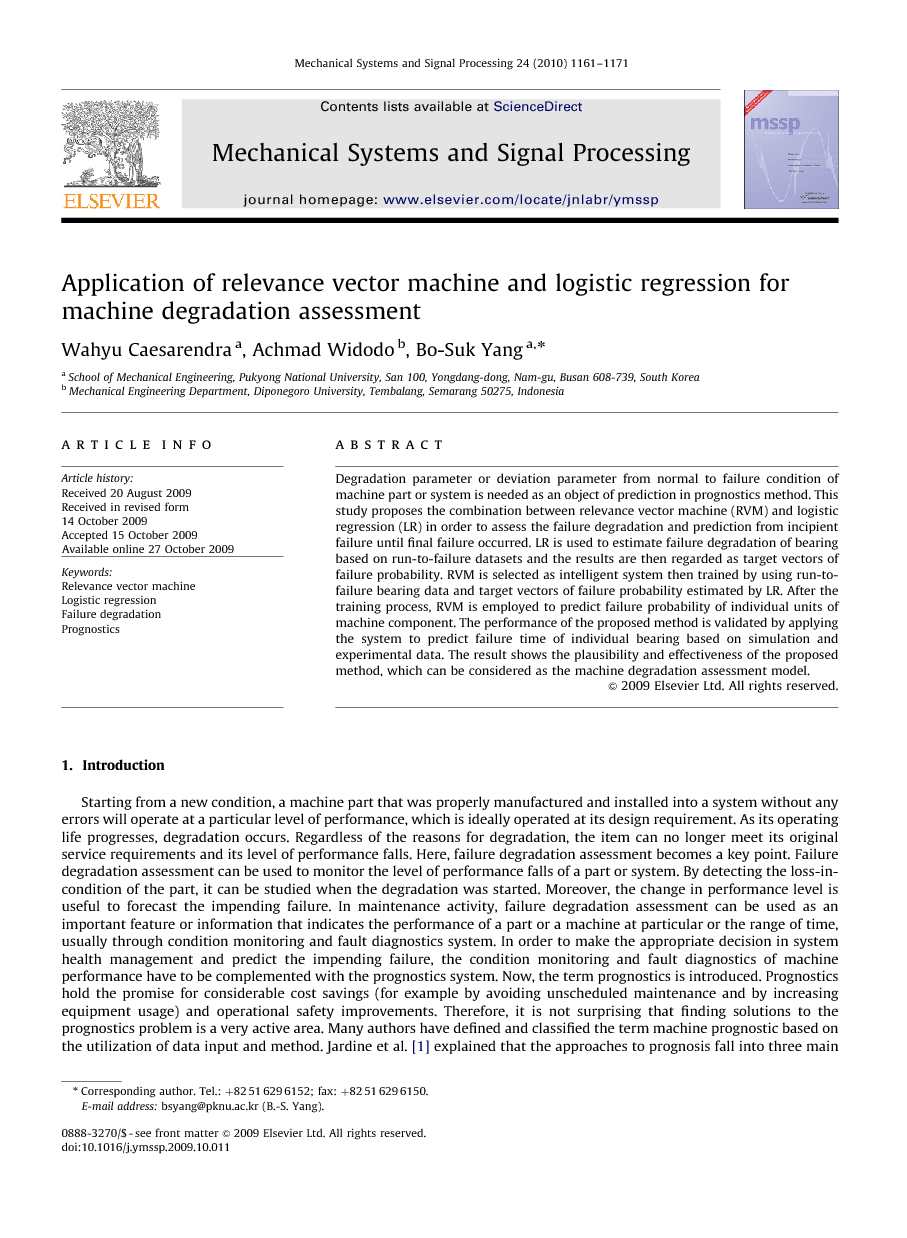 Degradation parameter or deviation parameter from normal to failure condition of machine part or system is needed as an object of prediction in prognostics method. This study proposes the combination between relevance vector machine (RVM) and logistic regression (LR) in order to assess the failure degradation and prediction from incipient failure until final failure occurred. LR is used to estimate failure degradation of bearing based on run-to-failure datasets and the results are then regarded as target vectors of failure probability. RVM is selected as intelligent system then trained by using run-to-failure bearing data and target vectors of failure probability estimated by LR. After the training process, RVM is employed to predict failure probability of individual units of machine component. The performance of the proposed method is validated by applying the system to predict failure time of individual bearing based on simulation and experimental data. The result shows the plausibility and effectiveness of the proposed method, which can be considered as the machine degradation assessment model.

Starting from a new condition, a machine part that was properly manufactured and installed into a system without any errors will operate at a particular level of performance, which is ideally operated at its design requirement. As its operating life progresses, degradation occurs. Regardless of the reasons for degradation, the item can no longer meet its original service requirements and its level of performance falls. Here, failure degradation assessment becomes a key point. Failure degradation assessment can be used to monitor the level of performance falls of a part or system. By detecting the loss-in-condition of the part, it can be studied when the degradation was started. Moreover, the change in performance level is useful to forecast the impending failure. In maintenance activity, failure degradation assessment can be used as an important feature or information that indicates the performance of a part or a machine at particular or the range of time, usually through condition monitoring and fault diagnostics system. In order to make the appropriate decision in system health management and predict the impending failure, the condition monitoring and fault diagnostics of machine performance have to be complemented with the prognostics system. Now, the term prognostics is introduced. Prognostics hold the promise for considerable cost savings (for example by avoiding unscheduled maintenance and by increasing equipment usage) and operational safety improvements. Therefore, it is not surprising that finding solutions to the prognostics problem is a very active area. Many authors have defined and classified the term machine prognostic based on the utilization of data input and method. Jardine et al. [1] explained that the approaches to prognosis fall into three main categories: statistical approaches, artificial intelligence (AI) approaches and model based approaches. Heng et al. [2] broke down the methods for predicting rotating machinery failure into two models: physics-based prognostics models and data-driven prognostics models. Each prognostics method has merits and demerits. Currently, the AI approach or the data driven approach is still a popular method that can be defined as a method to build models based on learning process or training process of condition monitoring (CM) data to produce the prediction output in terms of one-step-ahead or k-step-ahead prediction. In this category, artificial neural network (ANN) is the most commonly found in the prognostics literature [3], [4], [5], [6] and [7]. Other methods were reported using support vector machine [8], regression tree and neuro-fuzzy [9] and [10], and the Dempster–Shafer regression [11]. One approach that is rarely implemented due to limitation of maintenance records including both normal data and failure data is the probability prognostic approach. Probability prognostic is a more appropriate method since the behavior of failure is unpredictable and uncertain. This study proposes the combination of probability approach and data-driven approach based on logistic regression (LR) and relevance vector machine (RVM). The utilization of either LR or RVM for machine health prognostics is still in its infancy. LR is frequently used in statistic science and biomedical research, e.g. [12] and [13]. In mechanical engineering domain, Yan et al. [14] combined the LR and ARMA models for machine performance assessment and estimate remaining useful life (RUL). Yan et al. [15] also presented a prognostic method for on-line performance degradation assessment and root cause classification using multiple logistic regressions. Comprehensive discussion of LR can be found in [16]. RVM, which was first introduced by Tipping, [17] is often used for classification and pattern recognition [18], [19] and [20]. Previous work concerning classification has been devoted to fault diagnosis of low speed bearing using a multi-class RVM [21]. This study uses RVM in the application of prognostics in order to address the failure degradation assessment and prediction of incipient failure until final failure occurred. Feature named kurtosis is calculated initially. Kurtosis is a measure of whether the data are peaked or flat relative to a normal distribution [22]. Kurtosis is also one of the statistical time domain feature that indicates the performance degradation of bearing and provides potential damage detections at an earlier stage. The reason is when the defects impact the rolling element bearing, it produces a signal that has probability density sharper than a normal bearing. In this case, kurtosis is the best measure that indicates the peaked distribution related to rolling element bearing fault. Literatures [23], [24] and [25] have studied the use of kurtosis in assessing the bearing condition and have shown the effectiveness of kurtosis in bearing defect detection. After kurtosis is calculated, target vectors of failure probability are determined using a LR method. Simulation and experimental bearing run-to-failure data are used for validating the proposed method. RVM is used to train the kurtosis bearing data and target vectors of failure probability estimated by LR. After the training process, RVM is employed to predict the failure probability of an individual unit of machine component.

This study presents an application of relevance vector machine (RVM) for machine degradation assessment. Failure degradation in the form of target vectors is calculated using logistic regression (LR) from simulated bearing failure data and experiment bearing run-to-failure datasets, respectively. Best model of RVM is obtained by training process and save as weight and bias. Overfit prediction emerged when the selected kernel-width value is improper in both simulation and experimental data. However, failure degradation prediction result shows the proposed method can be considered to be a machine degradation assessment model.