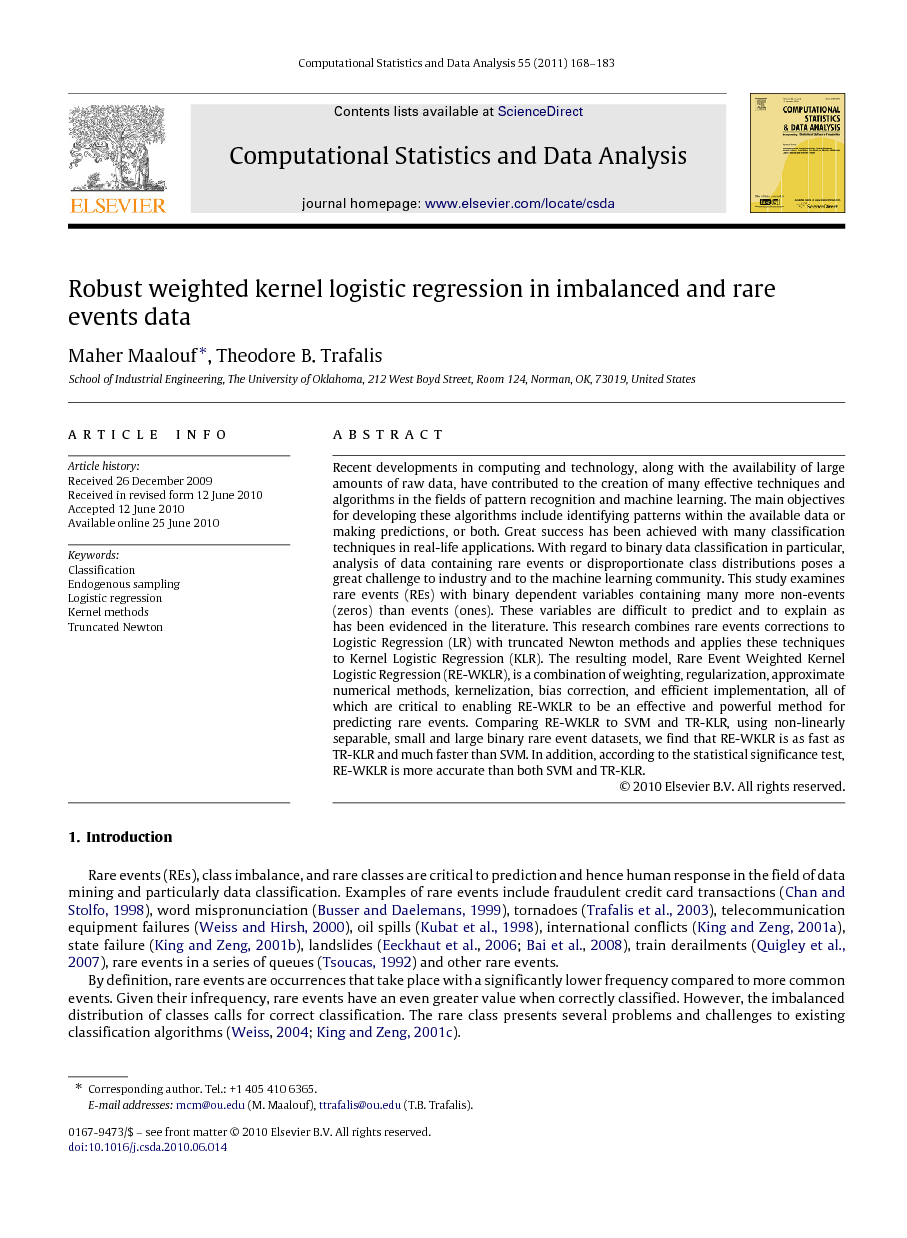 Recent developments in computing and technology, along with the availability of large amounts of raw data, have contributed to the creation of many effective techniques and algorithms in the fields of pattern recognition and machine learning. The main objectives for developing these algorithms include identifying patterns within the available data or making predictions, or both. Great success has been achieved with many classification techniques in real-life applications. With regard to binary data classification in particular, analysis of data containing rare events or disproportionate class distributions poses a great challenge to industry and to the machine learning community. This study examines rare events (REs) with binary dependent variables containing many more non-events (zeros) than events (ones). These variables are difficult to predict and to explain as has been evidenced in the literature. This research combines rare events corrections to Logistic Regression (LR) with truncated Newton methods and applies these techniques to Kernel Logistic Regression (KLR). The resulting model, Rare Event Weighted Kernel Logistic Regression (RE-WKLR), is a combination of weighting, regularization, approximate numerical methods, kernelization, bias correction, and efficient implementation, all of which are critical to enabling RE-WKLR to be an effective and powerful method for predicting rare events. Comparing RE-WKLR to SVM and TR-KLR, using non-linearly separable, small and large binary rare event datasets, we find that RE-WKLR is as fast as TR-KLR and much faster than SVM. In addition, according to the statistical significance test, RE-WKLR is more accurate than both SVM and TR-KLR.

We have presented the Rare Event Weighted Kernel Logistic Regression (RE-WKLR) algorithm and have demonstrated that the RE-WKLR algorithm is relatively easy to implement and is robust when implemented on imbalanced and rare event data. The algorithm combines several concepts from the fields of statistics, econometrics and machine learning. It was also shown that RE-WKLR is very powerful when applied to both small and large datasets. The RE-WKLR algorithm takes advantage of bias correction and the power of the kernel methods, particularly when the datasets are neither balanced nor linearly separable. Another benefit of using RE-WKLR is its implementation of unconstrained optimization methods whose algorithms are less complex than those with constrained optimization methods, such as SVM. Future studies may compare these methods using different kernels and algorithms and may implement them on imbalanced multi-class datasets. They may also try to improve the speed and sparsity of the algorithm. Future research may also extend the techniques provided in this study to Functional Data Analysis (FDA) where random variables take on infinite dimensional functional spaces. The excellent monograph on non-parametric FDA by ( Ferraty and Vieu, 2006) provides the mathematical background necessary for such an extension.