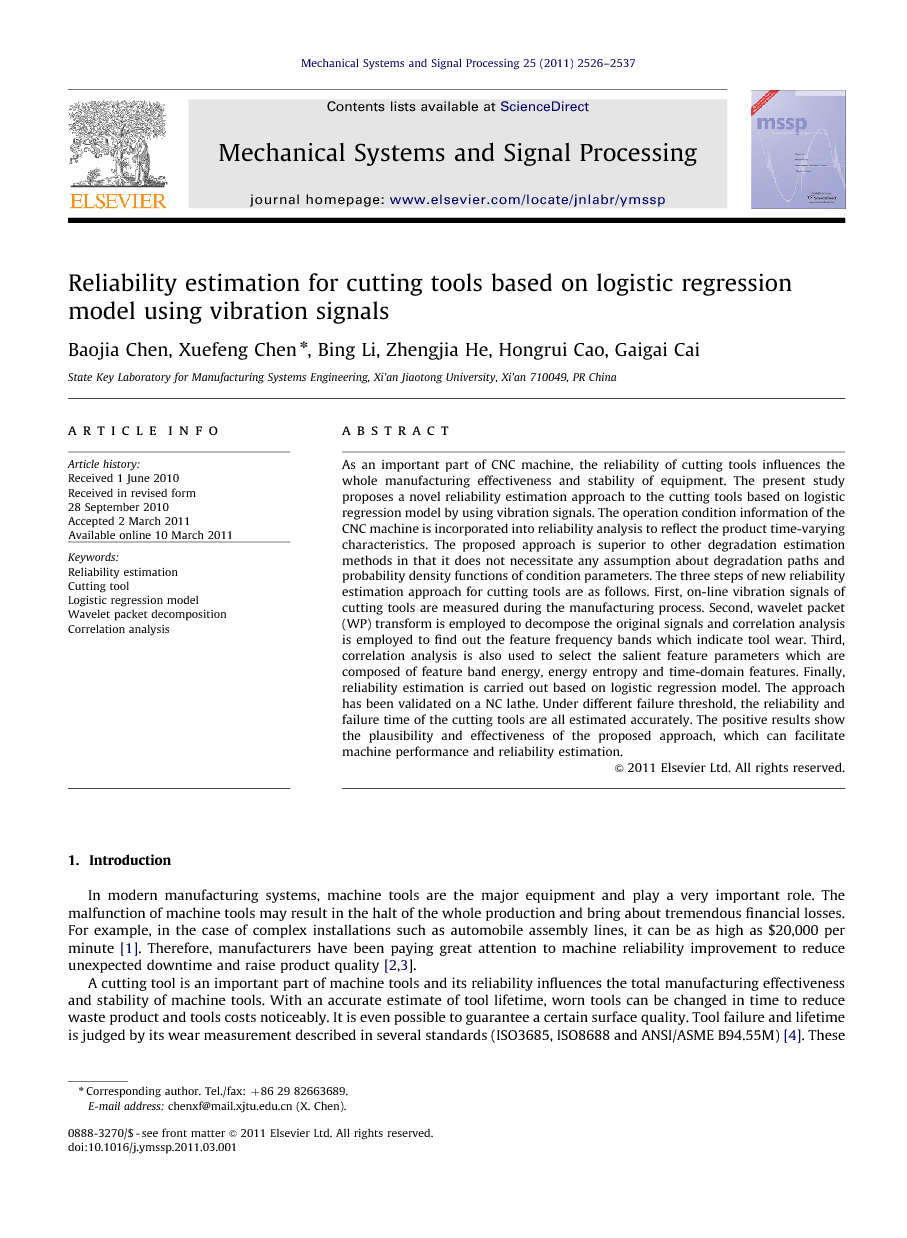 As an important part of CNC machine, the reliability of cutting tools influences the whole manufacturing effectiveness and stability of equipment. The present study proposes a novel reliability estimation approach to the cutting tools based on logistic regression model by using vibration signals. The operation condition information of the CNC machine is incorporated into reliability analysis to reflect the product time-varying characteristics. The proposed approach is superior to other degradation estimation methods in that it does not necessitate any assumption about degradation paths and probability density functions of condition parameters. The three steps of new reliability estimation approach for cutting tools are as follows. First, on-line vibration signals of cutting tools are measured during the manufacturing process. Second, wavelet packet (WP) transform is employed to decompose the original signals and correlation analysis is employed to find out the feature frequency bands which indicate tool wear. Third, correlation analysis is also used to select the salient feature parameters which are composed of feature band energy, energy entropy and time-domain features. Finally, reliability estimation is carried out based on logistic regression model. The approach has been validated on a NC lathe. Under different failure threshold, the reliability and failure time of the cutting tools are all estimated accurately. The positive results show the plausibility and effectiveness of the proposed approach, which can facilitate machine performance and reliability estimation.

In modern manufacturing systems, machine tools are the major equipment and play a very important role. The malfunction of machine tools may result in the halt of the whole production and bring about tremendous financial losses. For example, in the case of complex installations such as automobile assembly lines, it can be as high as $20,000 per minute [1]. Therefore, manufacturers have been paying great attention to machine reliability improvement to reduce unexpected downtime and raise product quality [2] and [3]. A cutting tool is an important part of machine tools and its reliability influences the total manufacturing effectiveness and stability of machine tools. With an accurate estimate of tool lifetime, worn tools can be changed in time to reduce waste product and tools costs noticeably. It is even possible to guarantee a certain surface quality. Tool failure and lifetime is judged by its wear measurement described in several standards (ISO3685, ISO8688 and ANSI/ASME B94.55M) [4]. These standards provide wear threshold values at several points of the worn region which is acquired by its direct measurement (e.g., CCD cameras). Due to the constraints of high cost, discontinuity and susceptibility to operational environment, the direct methods are restricted to a very narrow range of applications and need to be improved. In indirect methods, the wear state can be estimated by the cutting force, torque, temperature, acoustic emission and vibration [5], [6] and [7]. As one of the indirect sensor-based methods, vibration measurement is widely used due to its low price, easy implementation and on-line continuous testing characteristic. Some investigations have been carried out to correlate vibration signals to tool wear [8] and [9]. Their results show that vibration signature features extracted from time and frequency domains are sensitive to the tool wear. Now, the key issue to estimate cutting tools reliability indices is how to combine these vibration features using an appropriate reliability model. Traditional approaches to reliability analysis of physical and other electro-mechanical products are predominantly based on lifetime of large sample size [10]. Such reliability analyses have been extensively studied in the past [11] and [12]. With few exceptions, all these analyses are geared towards estimating population characteristics of a system, subsystem or component. However, for a single and small sample device(s), such statistic data are of little meaning. People are particularly interested in the life margin and current reliability of items used in their systems. Wherefore degradation measures often provide more information about device performance and precision during operation [13] and [14]. It is helpful to determine the product time-varying characteristics and reflect the relationship between failure and performance degradation. In general, degradation is the reduction in performance, reliability and life span of assets. There are a number of researches and applications on reliability assessment by using degradation data. Lu and Meeker [15] introduced a general nonlinear mixed-effects model and developed a Monte Carlo simulation procedure to calculate an estimate of the distribution function of the time-to-failure. Chen and Zheng [16] proposed an alternative approach which makes inference directly on the lifetime distribution. Chinnam and Rai [17] collected and analyzed thrust-force and torque signals generated by drilling operation to predict on-line reliability of the drill-bit. Lin et al. [18] demonstrated a procedure to extract useful condition indicators from vibration signals and use the proportional hazards model (PHM) to develop optimal maintenance policies for the gearboxes. Lin and Tseng [19] combined the Weibull PHM and vibration-based machine condition monitoring techniques to estimate several machine reliability statistics. However, the above methods require a specific mechanical knowledge and make many assumptions about condition parameters degradation paths and their distribution probability density functions. Logistic regression is a robust tool that can easily represent multiple variables as a dichotomous problem [20]. It has been widely used in bionomics, biology, epidemiology, etc. [21], [22] and [23]. The main advantages are that logistic regression does not rely on assumptions of normality for the predictor variables or the errors and it allows the selection effect to vary nonlinearly [24]. The independent variable can be continuous, discrete or dummy variable. Based on its likelihood function, it needs less computation effort to estimate parameters rather than PHM. [3] Assuming a facility performance state is a process from normal to failure, and may be reflected and interpreted by multiple feature parameters. The logistic regression model could be used to analyze and describe the failure probability of facilities under certain conditions, which would benefit decision making (using, repairing or replacing). Some exploratory work has been done on mechanical equipment performance evaluation and remaining useful life (RUL) prediction. Yan and Lee [25] explored a method to assess real-time performance of elevator door system by inputting features of online data to the logistic model. Liao et al. [26] presented a combination of the proportional hazards model and logistic regression model to predict the unit RUL. In the present study, vibration signals and tool wear were measured together during machining process. The salient features indicative of tool wear were extracted through signal processing techniques and integrated in a logistic regression model to evaluate reliability of lathe cutting tools. The rest of the paper is organized as follows: the reliability assessment method based on logistic regression model is described in Section 2, the experimental design and setup are introduced in Section 3, the vibration signals analysis, reliability modeling and application results are discussed in Section 4. Finally, some concluding remarks are given in Section 5.

The present study proposes a reliability estimation approach to cutting tools, which is based on a logistic regression model by using vibration signals. WP decomposition and correlation analysis are applied to extract and select the salient features. The selected band energy, energy entropy and time-domain features show a high degree of correlation to tool wear. Without requiring a specific mechanical knowledge and making many assumptions about probability density functions of variables, the logistic regression model for reliability estimation can be established just by acquiring the tools' feature vector and their corresponding state. A case study shows that the reliability indices and failure time of the tool can be accurately assessed by using the obtained model and the approach is also proved effective when the threshold is changed. The positive results of this research clearly demonstrate the potential of this approach in evaluating performance and reliability. Future work can be centered on model validity in case of small samples and combining with other methods to predict machine tool performance. In addition, we look forward to do more research on the robustness of the proposed method and the influence of tool material, workpiece material, cutting parameters to the model.