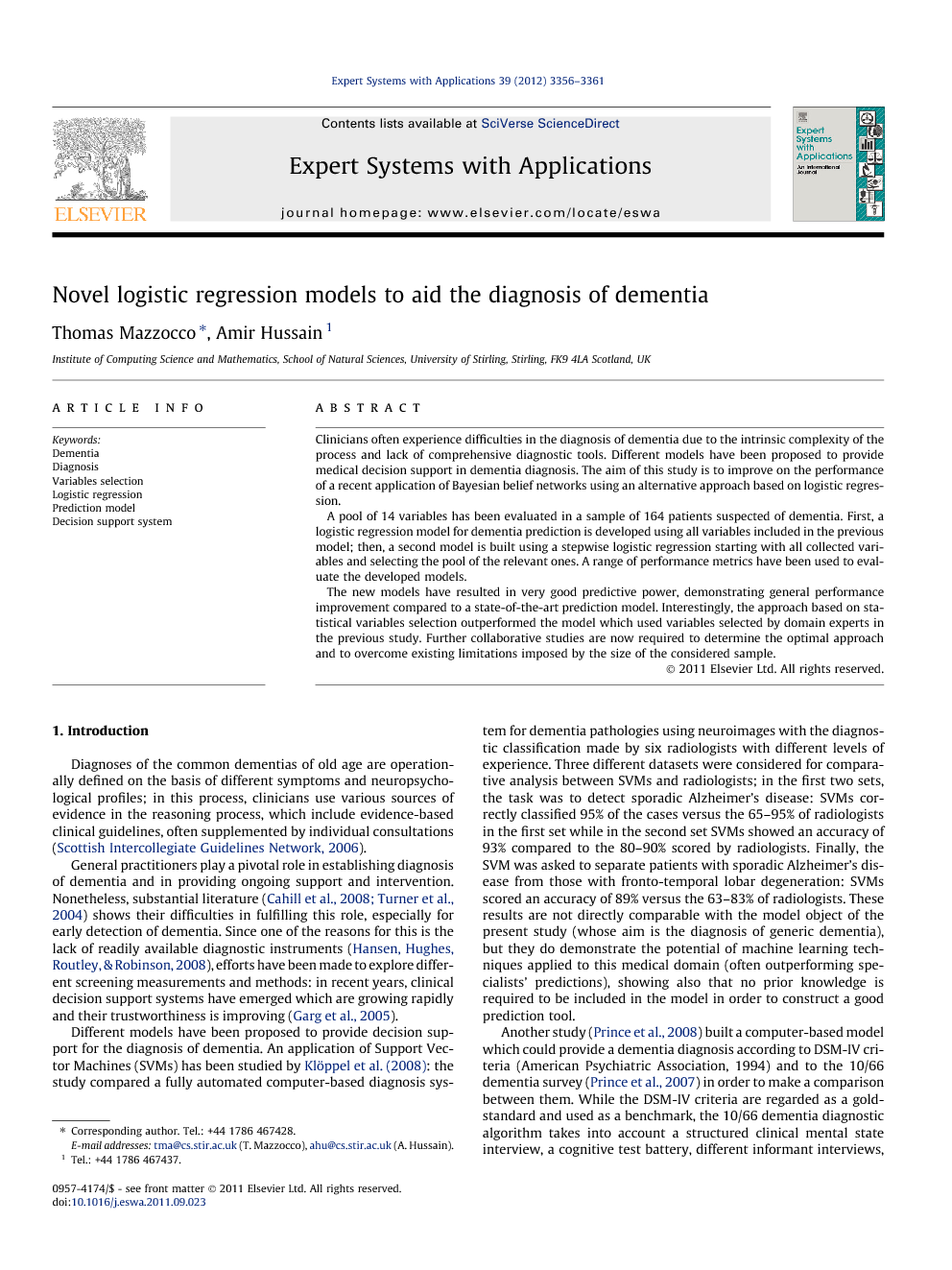 Clinicians often experience difficulties in the diagnosis of dementia due to the intrinsic complexity of the process and lack of comprehensive diagnostic tools. Different models have been proposed to provide medical decision support in dementia diagnosis. The aim of this study is to improve on the performance of a recent application of Bayesian belief networks using an alternative approach based on logistic regression. A pool of 14 variables has been evaluated in a sample of 164 patients suspected of dementia. First, a logistic regression model for dementia prediction is developed using all variables included in the previous model; then, a second model is built using a stepwise logistic regression starting with all collected variables and selecting the pool of the relevant ones. A range of performance metrics have been used to evaluate the developed models. The new models have resulted in very good predictive power, demonstrating general performance improvement compared to a state-of-the-art prediction model. Interestingly, the approach based on statistical variables selection outperformed the model which used variables selected by domain experts in the previous study. Further collaborative studies are now required to determine the optimal approach and to overcome existing limitations imposed by the size of the considered sample.

Diagnoses of the common dementias of old age are operationally defined on the basis of different symptoms and neuropsychological profiles; in this process, clinicians use various sources of evidence in the reasoning process, which include evidence-based clinical guidelines, often supplemented by individual consultations (Scottish Intercollegiate Guidelines Network, 2006). General practitioners play a pivotal role in establishing diagnosis of dementia and in providing ongoing support and intervention. Nonetheless, substantial literature (Cahill et al., 2008 and Turner et al., 2004) shows their difficulties in fulfilling this role, especially for early detection of dementia. Since one of the reasons for this is the lack of readily available diagnostic instruments (Hansen, Hughes, Routley, & Robinson, 2008), efforts have been made to explore different screening measurements and methods: in recent years, clinical decision support systems have emerged which are growing rapidly and their trustworthiness is improving (Garg et al., 2005). Different models have been proposed to provide decision support for the diagnosis of dementia. An application of Support Vector Machines (SVMs) has been studied by Klöppel et al. (2008): the study compared a fully automated computer-based diagnosis system for dementia pathologies using neuroimages with the diagnostic classification made by six radiologists with different levels of experience. Three different datasets were considered for comparative analysis between SVMs and radiologists; in the first two sets, the task was to detect sporadic Alzheimer’s disease: SVMs correctly classified 95% of the cases versus the 65–95% of radiologists in the first set while in the second set SVMs showed an accuracy of 93% compared to the 80–90% scored by radiologists. Finally, the SVM was asked to separate patients with sporadic Alzheimer’s disease from those with fronto-temporal lobar degeneration: SVMs scored an accuracy of 89% versus the 63–83% of radiologists. These results are not directly comparable with the model object of the present study (whose aim is the diagnosis of generic dementia), but they do demonstrate the potential of machine learning techniques applied to this medical domain (often outperforming specialists’ predictions), showing also that no prior knowledge is required to be included in the model in order to construct a good prediction tool. Another study (Prince et al., 2008) built a computer-based model which could provide a dementia diagnosis according to DSM-IV criteria (American Psychiatric Association, 1994) and to the 10/66 dementia survey (Prince et al., 2007) in order to make a comparison between them. While the DSM-IV criteria are regarded as a gold-standard and used as a benchmark, the 10/66 dementia diagnostic algorithm takes into account a structured clinical mental state interview, a cognitive test battery, different informant interviews, a neurological assessment and a questionnaire to detect behavioural and psychological symptoms: the results from this screening tests are then used to make a prediction on dementia diagnosis by means of a logistic regression equation previously developed in a pilot study. The tool has shown a sensitivity of 57.8% and a specificity of 98.3% using the implementation of the DSM-IV criteria; a sensitivity of 93.2% and a specificity of 96.8% was recorded using the 10/66 criteria. Although the very different number and type of collected variables prevent us from a comparison with the results of the present study (where a limited number of variables is collected), however, this application shows that a model based on logistic regression (and so without a prior built-in knowledge) could outperform the gold-standard guidelines. A novel application (called DemNet) of Bayesian belief networks (BBN) to provide medical decision support for the diagnosis of dementia in primary care practice has been recently proposed by Oteniya, Coles, and Cowie (2005); this was built as a “hand-crafted” model, since it relies on domain experts’ knowledge. A BBN is a representation of complex domains that are characterised by uncertainty which enables inference of future uncertain events based on prior related known events. More formally (Jensen, 2001) a BBN includes a set of nodes (or vertices) that represent the domain variables, a set of directed edges which represent dependency relationships between the variables and a set of local probability tables, one table per variable, which quantitatively encodes the strength of each dependency relation. Standard benchmarks have shown that good results are achieved in the diagnosis of dementia using BBN. The developed model was implemented in a software system designed to be used by clinical practice nurses involved in the primary level assessment of patients suspected of having dementia; in an attempt to optimise user friendliness and utility in a busy primary care setting, the model sought to use numerically few parameters which are consistent with a reasonably high diagnostic accuracy (Cowie, Oteniya, & Coles, 2006). The setting of this last application is quite agile (given the small amount of information required to make a prediction) when compared with the previously cited studies. However, they required both technical expertise and domain experts’ knowledge for building the more sophisticated and complex Bayesian belief network model. The present study builds on this previous research and the aim of this study is to investigate whether a novel model can be constructed that can outperform the considered benchmark hand-crafted model. Consequently, a performance improvement is expected using the same dataset and a common set of performance metrics. A general framework for testing and possibly improving such models is also implicitly presented. The remainder of this paper is organized as follows: research methods are described in Section 2, results are presented in Section 3, discussion and conclusions follow in Section 4 and 5 respectively.

The main aim of this study was to build an alternative model which could improve the results produced by a state-of-the-art Bayesian belief network model recently developed for dementia diagnosis. The proposed prediction models used a logistic regression algorithm to predict the diagnosis of dementia using variables selected either by domain experts or by a statistical driven procedure. Results have shown a noticeable improvement in considered performance metrics with the proposed models outperforming the benchmark hand-crafted model which required both technical expertise and domain experts’ knowledge for building the more sophisticated and complex Bayesian belief network model. Interestingly, the approach based on statistical variables selection outperformed the model which used variables selected by domain experts in the previous study. Some limitations should also be acknowledged: first, the considered sample of patients was quite small (164 patients) leading to a possible dependence on a specific dataset, with loss of generalization power; a second limitation relates to the fact that the available data were collected as part of a previous research, so the motivations behind collecting these specific variables and not others as well as the exact mapping procedure for qualitative variables are not known in details. These two limitations are sufficient to prevent this model from being directly used in clinical practice; however, the new model offers fertile ground for further research and development. In conclusion, whilst the preliminary results reported in this study should be taken with care, they do demonstrate the capability of employing relatively simple logistic regression based prediction models for dementia diagnosis and a range of contributions and potential impact is envisaged from this work both for clinical practice and further research. A future large-scale study is required to determine the optimal approach for variables selection and to overcome existing limitations imposed by the size of the considered sample; this should also assess the feasibility of deploying such models in clinical practice. In addition, the approach presented in this paper could be potentially formulated as a general algorithm for benchmarking the performance of all predictive (including hand-crafted) models: the proposed general framework based on variable selection and regression (with consequent tests and analyses) can be readily adapted and reused in different contexts, additionally yielding new and potentially useful clinical insights (e.g. through the analysis of considered and excluded variables).