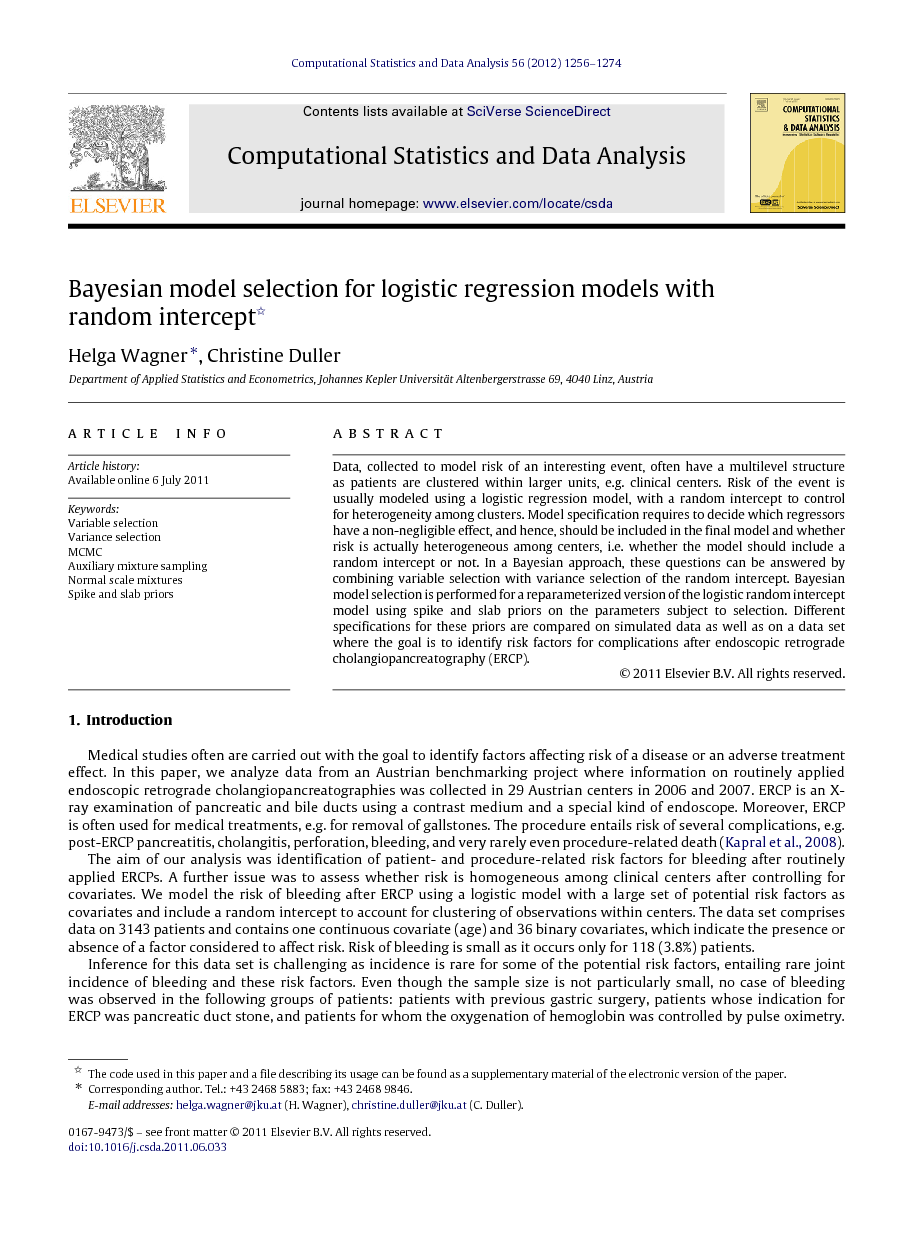 Data, collected to model risk of an interesting event, often have a multilevel structure as patients are clustered within larger units, e.g. clinical centers. Risk of the event is usually modeled using a logistic regression model, with a random intercept to control for heterogeneity among clusters. Model specification requires to decide which regressors have a non-negligible effect, and hence, should be included in the final model and whether risk is actually heterogeneous among centers, i.e. whether the model should include a random intercept or not. In a Bayesian approach, these questions can be answered by combining variable selection with variance selection of the random intercept. Bayesian model selection is performed for a reparameterized version of the logistic random intercept model using spike and slab priors on the parameters subject to selection. Different specifications for these priors are compared on simulated data as well as on a data set where the goal is to identify risk factors for complications after endoscopic retrograde cholangiopancreatography (ERCP).

In this paper, full Bayesian model selection for logistic regression models with a random intercept is investigated. The model selection procedure allows the researcher to specify a rather general model including all potential risk factors and a center-specific random intercept to account for potential heterogeneity among centers. During MCMC, the model space is explored, making inference on posterior inclusion probabilities of regressors and the center-specific random intercept feasible. As a further advantage, separation, which frequently occurs when joint incidence of the interesting event and a risk factor is rare, is dealt with adequately. Inference on inclusion/exclusion of the center-specific random intercepts is performed in a reparameterized version of the model. This reparameterization allows to use the same priors for an appropriately defined parameter of the random intercept distribution as for the regression effects, thus leading a convenient MCMC scheme. For all parameters subject to selection, we compared spike and slab priors with Dirac or absolutely continuous spikes. With the exception of the Dirac/normal prior (which was used in Frühwirth-Schnatter and Tüchler, 2008 and Tüchler, 2008 and Wagner and Tüchler (2010)), these priors have not yet been used for variance selection of random intercepts or random effects. Our results indicate that for appropriate choices of the spike variance, estimated posterior inclusion probabilities both for regressors as well as the random intercept correspond closely if the same slab component is used. Dirac spikes and absolutely continuous spikes require different sampling schemes: marginalization which is necessary for Dirac spikes produces less autocorrelated draws but at higher computational cost. The trade-off between better mixing of the MCMC chain and computational cost will not only depend on the number of potential regressors, but also on their posterior inclusion probabilities, and therefore general conclusions cannot be given. Within each class of spike, we would recommend choosing priors with Student slabs, i.e. either the Dirac/Student or the Student/Student prior. Though MCMC for priors with Laplace components performs well with regard to integrated autocorrelation times, sampling from the GIGGIG-distribution is too costly in our implementation. With a faster algorithm to produce these draws, these priors could be interesting competitors. The data situation of the ERCP study might serve as a benchmark concerning the choice of the spike type with ESS per second being highest (though only slightly in the worst case) for the Student/Student prior.