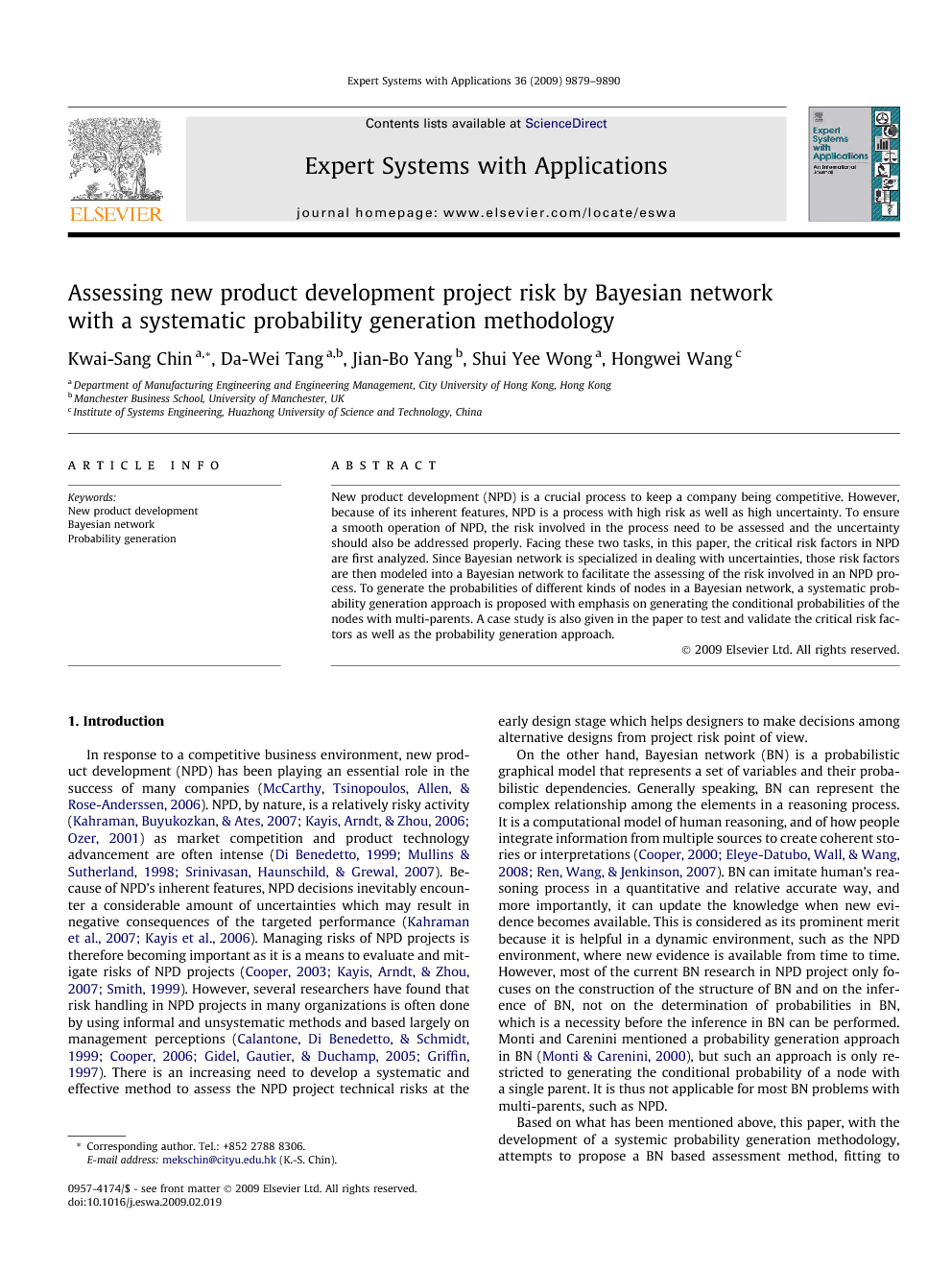 New product development (NPD) is a crucial process to keep a company being competitive. However, because of its inherent features, NPD is a process with high risk as well as high uncertainty. To ensure a smooth operation of NPD, the risk involved in the process need to be assessed and the uncertainty should also be addressed properly. Facing these two tasks, in this paper, the critical risk factors in NPD are first analyzed. Since Bayesian network is specialized in dealing with uncertainties, those risk factors are then modeled into a Bayesian network to facilitate the assessing of the risk involved in an NPD process. To generate the probabilities of different kinds of nodes in a Bayesian network, a systematic probability generation approach is proposed with emphasis on generating the conditional probabilities of the nodes with multi-parents. A case study is also given in the paper to test and validate the critical risk factors as well as the probability generation approach.

In response to a competitive business environment, new product development (NPD) has been playing an essential role in the success of many companies (McCarthy, Tsinopoulos, Allen, & Rose-Anderssen, 2006). NPD, by nature, is a relatively risky activity (Kahraman et al., 2007, Kayis et al., 2006 and Ozer, 2001) as market competition and product technology advancement are often intense (Di Benedetto, 1999, Mullins and Sutherland, 1998 and Srinivasan et al., 2007). Because of NPD’s inherent features, NPD decisions inevitably encounter a considerable amount of uncertainties which may result in negative consequences of the targeted performance (Kahraman et al., 2007 and Kayis et al., 2006). Managing risks of NPD projects is therefore becoming important as it is a means to evaluate and mitigate risks of NPD projects (Cooper, 2003, Kayis et al., 2007 and Smith, 1999). However, several researchers have found that risk handling in NPD projects in many organizations is often done by using informal and unsystematic methods and based largely on management perceptions (Calantone et al., 1999, Cooper, 2006, Gidel et al., 2005 and Griffin, 1997). There is an increasing need to develop a systematic and effective method to assess the NPD project technical risks at the early design stage which helps designers to make decisions among alternative designs from project risk point of view. On the other hand, Bayesian network (BN) is a probabilistic graphical model that represents a set of variables and their probabilistic dependencies. Generally speaking, BN can represent the complex relationship among the elements in a reasoning process. It is a computational model of human reasoning, and of how people integrate information from multiple sources to create coherent stories or interpretations (Cooper, 2000, Eleye-Datubo et al., 2008 and Ren et al., 2007). BN can imitate human’s reasoning process in a quantitative and relative accurate way, and more importantly, it can update the knowledge when new evidence becomes available. This is considered as its prominent merit because it is helpful in a dynamic environment, such as the NPD environment, where new evidence is available from time to time. However, most of the current BN research in NPD project only focuses on the construction of the structure of BN and on the inference of BN, not on the determination of probabilities in BN, which is a necessity before the inference in BN can be performed. Monti and Carenini mentioned a probability generation approach in BN (Monti & Carenini, 2000), but such an approach is only restricted to generating the conditional probability of a node with a single parent. It is thus not applicable for most BN problems with multi-parents, such as NPD. Based on what has been mentioned above, this paper, with the development of a systemic probability generation methodology, attempts to propose a BN based assessment method, fitting to multi-parent situation, to evaluate the NPD project risks. Two areas have been investigated and described in this paper. The critical risk factors in NPD project execution and their interrelationship will be firstly investigated and presented. The second is to develop a BN network for these factors with a systematic probability generation approach, with emphasis on generating the conditional probabilities of the nodes with multi-parents, to facilitate the assessment of NPD project risks. An industrial case is used to demonstrate the effectiveness of this proposed methodology.

A network relationship of critical risk factors in NPD project execution which is yet theoretically thorough is developed in this paper. The network is designed to facilitate the evaluation of NPD projects by determining the project execution risk. Four major nodes are identified, namely research and development risk, supply risk, production risk and product reliability. This network is further incorporated into a modified Bayesian network approach in order to facilitate a quantitative and more accurate risk-based NPD project assessment. By introducing the modified Bayesian network approach, the conditional probabilities of the nodes with multi-parents in Bayesian networks are generated. When constructing a Bayesian network, the approach investigated in this paper for generating conditional probabilities can be used to help the elicitation of experts’ judgments. This is achieved by the introduction of pair-wise comparisons to estimate the prior probabilities of root nodes and the conditional probabilities of single-parent nodes and by the generation of conditional probabilities of multi-parent nodes through the generation of conditional probabilities of each parent instead of estimating those conditional probabilities directly. A two-stage risk analysis example is discussed in the case study example. In stage 1, a lower risk alternative is selected. In stage 2 appropriate risk reduction measures are taken into account. Both the analyses are fulfilled through the inference of Bayesian networks. The proposed method in this paper has two major shortcomings. The first one is that it suffers from the problem of the so called “curse of dimension”: If the number of the states of a node in Bayesian network becomes large or the structure of the Bayesian network becomes complex in which a node have many parents, the number of conditional probability tables will increase tremendously and a huge effort is required to fill in all the tables. The second shortcoming relates to the variety of input formation. As mentioned in Section 4.4, the input of the method proposed in this paper is the prior probabilities of the states of nodes and the sum of those probabilities must be exactly one. It implies that the experts should have complete knowledge about their judgments. Those requirements will limit the method since information provided by experts may be of various features (e.g., qualitative, quantitative, interval, fuzzy, etc.). Furthermore, in the context of NPD, it is understandable for experts to be ignorant in their judgments and such ignorance cannot be modeled in our method. For our future work, possible methods to overcome the above shortcomings would be sought. A framework which can accommodate various forms of input and can offer a flexible way for the experts to express their judgments is anticipated.