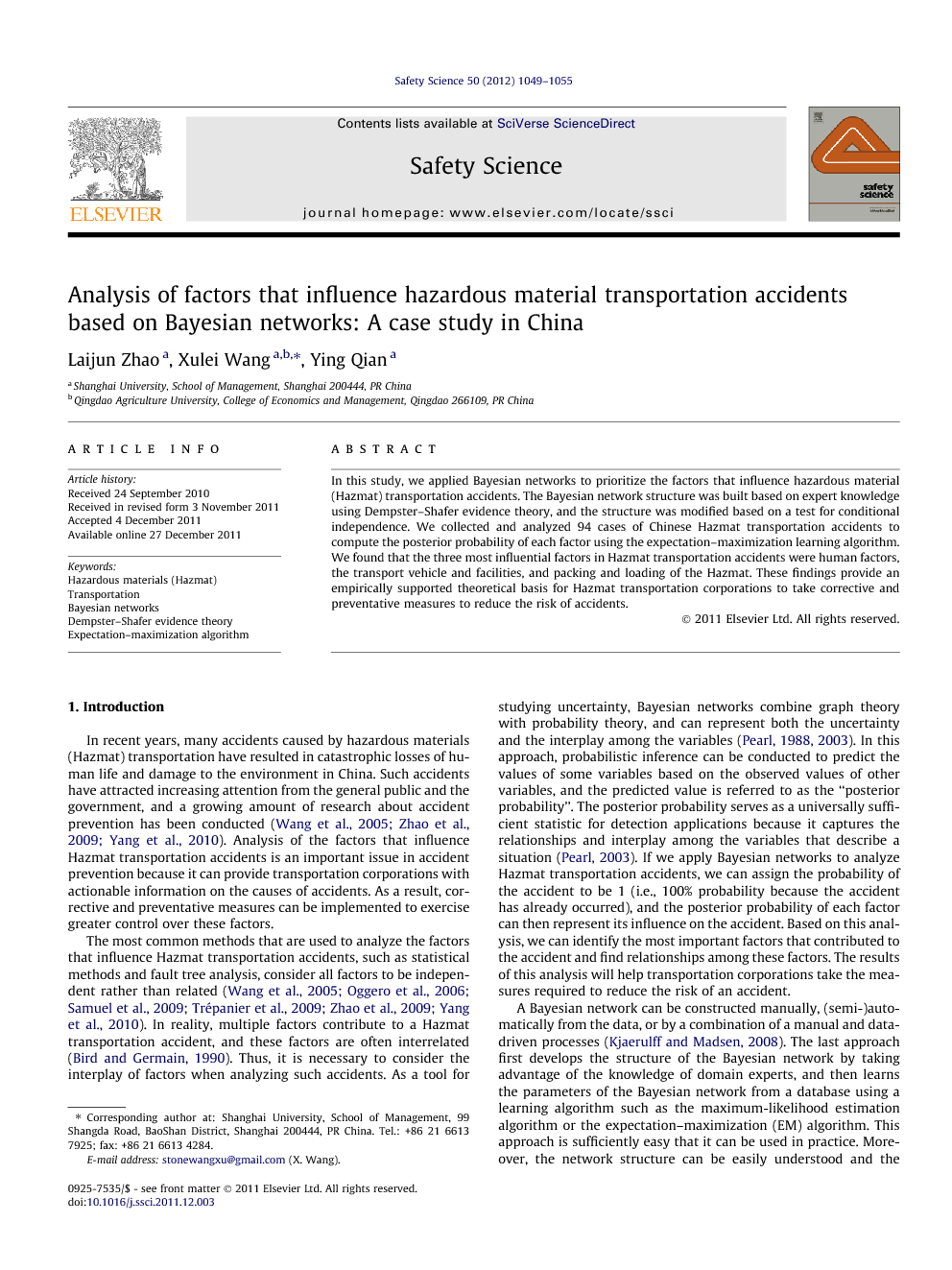 In recent years, many accidents caused by hazardous materials (Hazmat) transportation have resulted in catastrophic losses of human life and damage to the environment in China. Such accidents have attracted increasing attention from the general public and the government, and a growing amount of research about accident prevention has been conducted (Wang et al., 2005, Zhao et al., 2009 and Yang et al., 2010). Analysis of the factors that influence Hazmat transportation accidents is an important issue in accident prevention because it can provide transportation corporations with actionable information on the causes of accidents. As a result, corrective and preventative measures can be implemented to exercise greater control over these factors. The most common methods that are used to analyze the factors that influence Hazmat transportation accidents, such as statistical methods and fault tree analysis, consider all factors to be independent rather than related (Wang et al., 2005, Oggero et al., 2006, Samuel et al., 2009, Trépanier et al., 2009, Zhao et al., 2009 and Yang et al., 2010). In reality, multiple factors contribute to a Hazmat transportation accident, and these factors are often interrelated (Bird and Germain, 1990). Thus, it is necessary to consider the interplay of factors when analyzing such accidents. As a tool for studying uncertainty, Bayesian networks combine graph theory with probability theory, and can represent both the uncertainty and the interplay among the variables (Pearl, 1988 and Pearl, 2003). In this approach, probabilistic inference can be conducted to predict the values of some variables based on the observed values of other variables, and the predicted value is referred to as the “posterior probability”. The posterior probability serves as a universally sufficient statistic for detection applications because it captures the relationships and interplay among the variables that describe a situation (Pearl, 2003). If we apply Bayesian networks to analyze Hazmat transportation accidents, we can assign the probability of the accident to be 1 (i.e., 100% probability because the accident has already occurred), and the posterior probability of each factor can then represent its influence on the accident. Based on this analysis, we can identify the most important factors that contributed to the accident and find relationships among these factors. The results of this analysis will help transportation corporations take the measures required to reduce the risk of an accident. A Bayesian network can be constructed manually, (semi-)automatically from the data, or by a combination of a manual and data-driven processes (Kjaerulff and Madsen, 2008). The last approach first develops the structure of the Bayesian network by taking advantage of the knowledge of domain experts, and then learns the parameters of the Bayesian network from a database using a learning algorithm such as the maximum-likelihood estimation algorithm or the expectation–maximization (EM) algorithm. This approach is sufficiently easy that it can be used in practice. Moreover, the network structure can be easily understood and the expert knowledge can be easily incorporated in the model. However, this method has two limitations: expert knowledge is subjective and limited, which results in poor reliability when building the network’s structure, and conditional independence among the variables is ignored when the experts confirm the causal relationship among variables. Overcoming these limitations is the key issue when constructing Bayesian networks using this approach. The remainder of this paper is organized as follows: Section 2 presents a literature review on the analysis of factors that influence Hazmat transportation accidents and Bayesian networks. Section 3 identifies key factors involved in Hazmat transportation accidents and builds a Bayesian network structure based on expert knowledge using Dempster–Shafer (D–S) evidence theory. Moreover, the structure of Bayesian network is modified according to the conditional independence test. Section 4 computes the posterior probability of the factors using the EM algorithm to find the influence of the different factors on transportation accidents. Section 5 analyzes the results and describes their implications for China’s Hazmat transportation corporations. Section 6 provides our conclusions