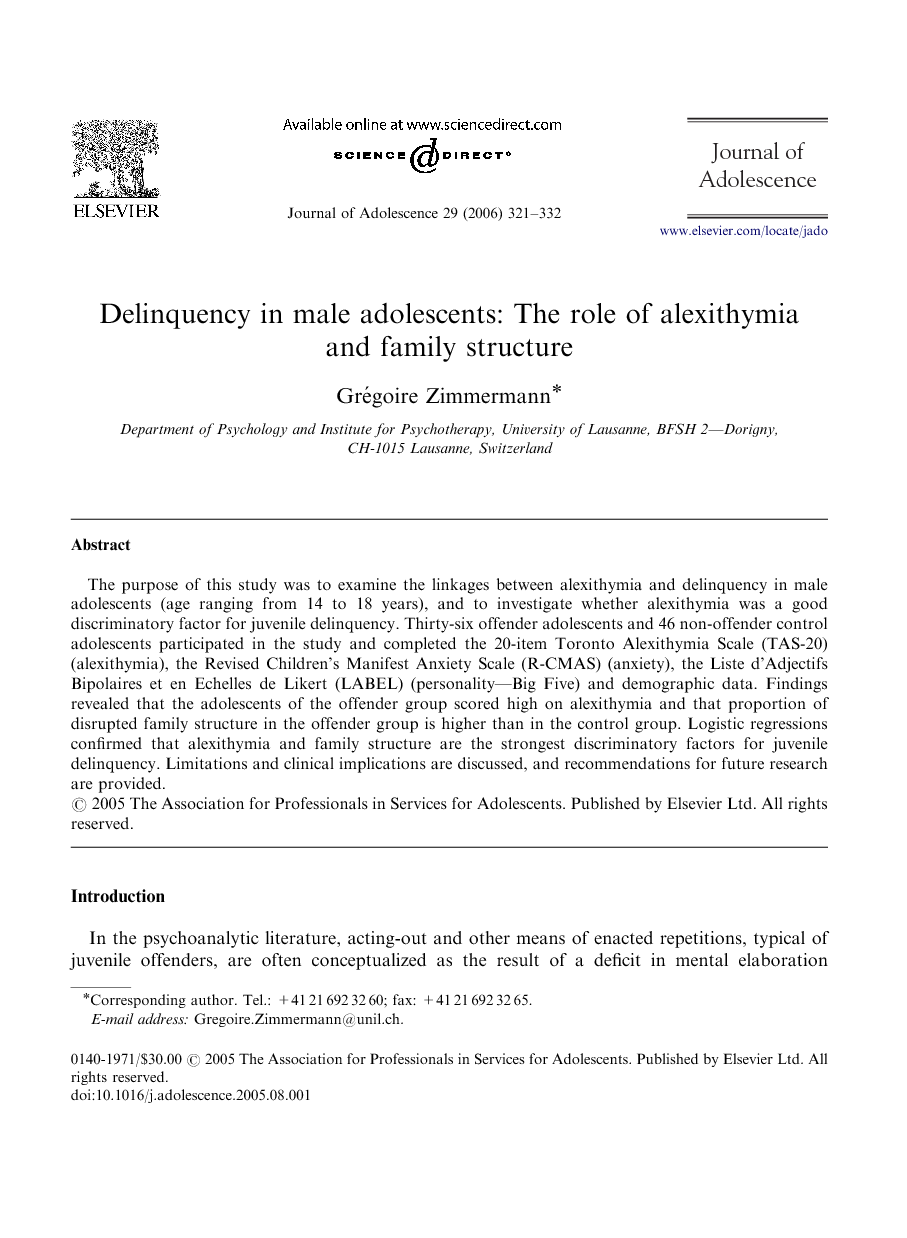 The purpose of this study was to examine the linkages between alexithymia and delinquency in male adolescents (age ranging from 14 to 18 years), and to investigate whether alexithymia was a good discriminatory factor for juvenile delinquency. Thirty-six offender adolescents and 46 non-offender control adolescents participated in the study and completed the 20-item Toronto Alexithymia Scale (TAS-20) (alexithymia), the Revised Children's Manifest Anxiety Scale (R-CMAS) (anxiety), the Liste d’Adjectifs Bipolaires et en Echelles de Likert (LABEL) (personality—Big Five) and demographic data. Findings revealed that the adolescents of the offender group scored high on alexithymia and that proportion of disrupted family structure in the offender group is higher than in the control group. Logistic regressions confirmed that alexithymia and family structure are the strongest discriminatory factors for juvenile delinquency. Limitations and clinical implications are discussed, and recommendations for future research are provided.

In the psychoanalytic literature, acting-out and other means of enacted repetitions, typical of juvenile offenders, are often conceptualized as the result of a deficit in mental elaboration (Cahn, 1987). Currently, several authors consider the concept of alexithymia to be related to this deficit in mental elaboration ( McDougall, 1982; Quartier & Zimmermann, 2004; Tardif, 1998). The construct of alexithymia, literally without word for feelings, is based on observations of psychosomatic patients and was first introduced in the early 1970s by Sifneos (1973). The alexithymia construct covers a cluster of cognitive and affective features, mainly characterized by a difficulty in identifying and expressing feelings, a striking paucity of fantasies, and an externally oriented cognitive style ( Nemiah, Freyberger, & Sifneos, 1976). These features are thought to reflect a deficit in the cognitive processing and regulation of emotional states ( Taylor, Bagby, & Parker, 1997). Alexithymia was first studied in classical psychosomatic or somatic disorders. However, during the last decade, it has been investigated from other perspectives ( Taylor & Bagby, 2004), and has been associated with a great variety of medical disorders (e.g. hypertension and inflammatory bowel diseases) and psychiatric disorders (e.g. substance use and eating disorders) ( Taylor, 2000; Taylor et al., 1997). Theoretical and empirical works regarding the aetiology of juvenile delinquency that include individual, familial and social factors are abundant. However, while clinicians and researchers can define groups of adolescents who might be at risk for delinquency, few authors have tried to predict why some of these at-risk youths develop delinquent behaviours, while others do not. The alexithymia construct may have implication for understanding this evolution and the development of repetitive and disruptive behaviours in juvenile offenders. Thirty years ago, Nemiah et al. (1976) indicated that alexithymic patients “may on occasion manifest brief but violent outbursts of affective behaviours” (p. 432), but are unaware of underlying feelings expressed. Since then, several authors have published clinical and theoretical works suggesting the presence of alexithymia among juvenile offenders (Jeammet, 2001; Marohn (1990) and Marohn (1992); Schreiber, 1992). However, empirical works studying alexithymic characteristics in this population are rare. In fact, besides two published studies (Langevin & Hare, 2001; Moriarty, Stough, Tidmarsh, Eger, & Dennison, 2001) there are, to our knowledge, no data on alexithymia in samples of juvenile offenders. Moriarty et al. (2001) investigated emotional intelligence in 15 male adolescent sex offenders and 49 male non-offenders and showed that sex offenders presented difficulty in identifying feelings and were more aggressive than control adolescents. However, even if the results indicated high scores on the alexithymia scale (20-item Toronto Alexithymia Scale (TAS-20)) (Bagby, Parker, & Taylor, 1994; Bagby, Taylor, & Parker, 1994), there were no significant differences between the two groups. In their study, Langevin and Hare (2001) examined the link between psychopathy, alexithymia and ability for symbolization in a sample of 60 male adolescents (40 offenders and 20 controls). As expected, they reported that alexithymia correlated positively with psychopathy and negatively with the capacity for symbolization. Moreover, descriptive statistics showed that juvenile offenders recorded higher score on TAS-20 than the control group. Finally, there is some evidence suggesting that juvenile offenders present an impairment of their facial affect recognition ability (McCown, Johnson, & Austin (1986) and McCown, Johnson, & Austin (1988)). This ability is commonly associated with alexithymia (Lane, Lee, Riedel, Shapiro, & Kaszniak, 2000; Lane et al., 1996). The aim of the present study is to examine the relative contribution of alexithymia to explain juvenile delinquency. Specifically, it is hypothesized that delinquents are more alexithymic than control group subjects and that alexthymia could better differentiate juvenile offenders from juvenile non-offenders than other personality, mood and demographic variables.