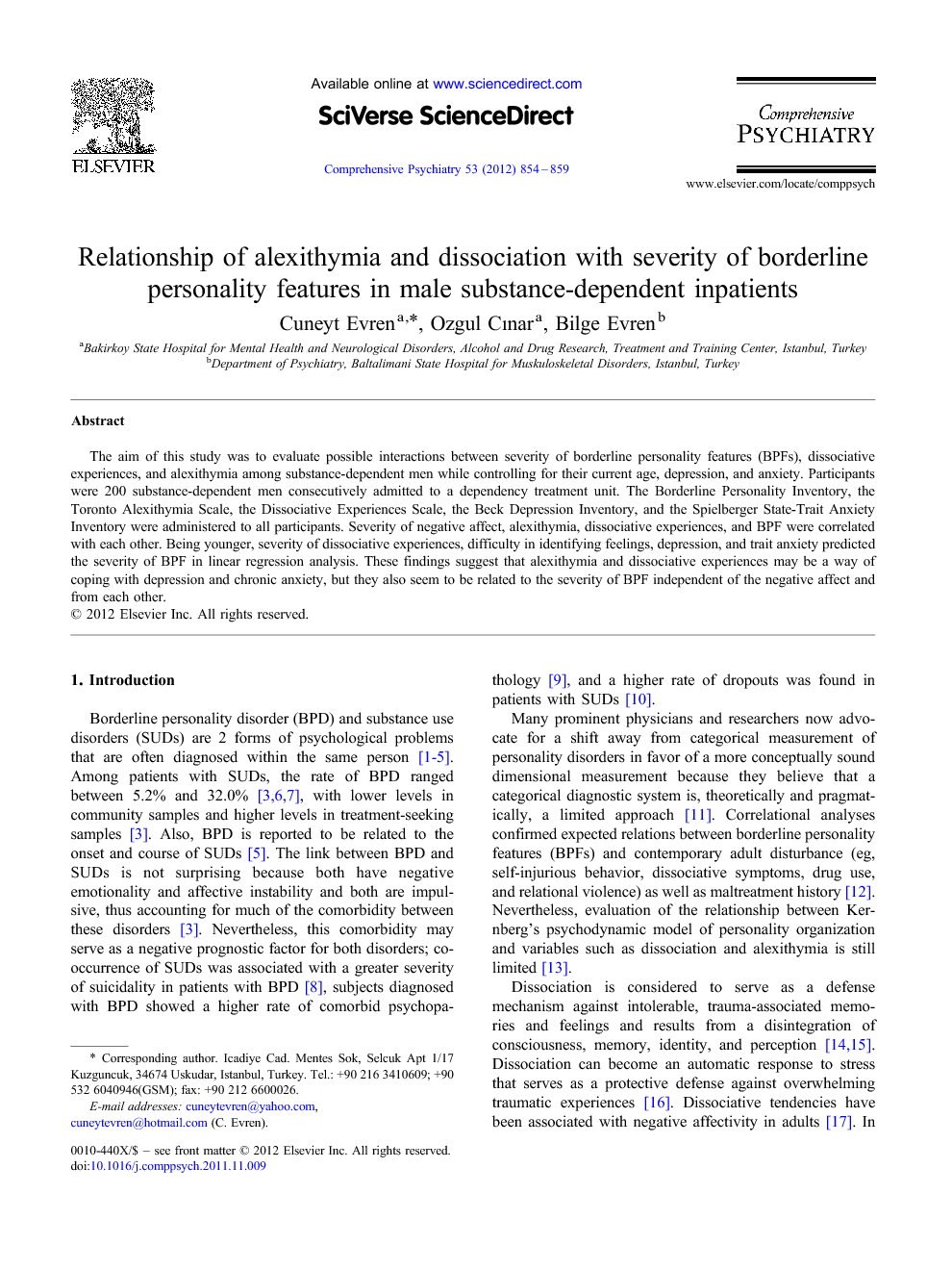 Borderline personality disorder (BPD) and substance use disorders (SUDs) are 2 forms of psychological problems that are often diagnosed within the same person [1], [2], [3], [4] and [5]. Among patients with SUDs, the rate of BPD ranged between 5.2% and 32.0% [3], [6] and [7], with lower levels in community samples and higher levels in treatment-seeking samples [3]. Also, BPD is reported to be related to the onset and course of SUDs [5]. The link between BPD and SUDs is not surprising because both have negative emotionality and affective instability and both are impulsive, thus accounting for much of the comorbidity between these disorders [3]. Nevertheless, this comorbidity may serve as a negative prognostic factor for both disorders; co-occurrence of SUDs was associated with a greater severity of suicidality in patients with BPD [8], subjects diagnosed with BPD showed a higher rate of comorbid psychopathology [9], and a higher rate of dropouts was found in patients with SUDs [10]. Many prominent physicians and researchers now advocate for a shift away from categorical measurement of personality disorders in favor of a more conceptually sound dimensional measurement because they believe that a categorical diagnostic system is, theoretically and pragmatically, a limited approach [11]. Correlational analyses confirmed expected relations between borderline personality features (BPFs) and contemporary adult disturbance (eg, self-injurious behavior, dissociative symptoms, drug use, and relational violence) as well as maltreatment history [12]. Nevertheless, evaluation of the relationship between Kernberg's psychodynamic model of personality organization and variables such as dissociation and alexithymia is still limited [13]. Dissociation is considered to serve as a defense mechanism against intolerable, trauma-associated memories and feelings and results from a disintegration of consciousness, memory, identity, and perception [14] and [15]. Dissociation can become an automatic response to stress that serves as a protective defense against overwhelming traumatic experiences [16]. Dissociative tendencies have been associated with negative affectivity in adults [17]. In studies conducted with adolescents [18] and [19] and with adults [20] and [21], severity of dissociative symptoms was found to be significantly associated with the severity of anxiety, which suggests that dissociation serves as a way of coping with anxiety. Consistent with this, patients with BPD might be prone to dissociation when experiencing stress and are characterized by a generally heightened level of dissociation [22]. In a previous study, the inpatients with BPD reported significantly more dissociative symptoms and disorders on all measures [23]. Dissociation occurs in about two thirds of people with BPD [24]. Also, dissociation before treatment was correlated with general psychopathology at treatment end in patients with BPD [25]. Finally, severity of BPF was correlated with the severity of dissociative experiences in patients with SUDs [26]. As a dissociative reaction, alexithymia is another strategy that has been put forward as a coping mechanism to alleviate painful emotions [27]. Alexithymia is a multifaceted personality construct defined as (a) a difficulty in identifying feelings (DIF), (b) a difficulty in describing feelings (DDF), and (c) externally oriented thinking (EOT). Recent studies have reported an association between alexithymia and primitive and immature ego defense styles, which implies a relatively primitive way of dealing with emotional problems [28]. Manifestation of alexithymic features might be a transitory reaction evoked by stressful situations and accompanying depression and anxiety, which is called secondary alexithymia [29]. The relationship between alexithymia and BPD suggests that difficulty identifying, differentiating, understanding, and communicating emotions and feelings impairs the ability to regulate their emotions in these patients [30]. In a mixed group of patients with psychiatric conditions and nonclinical subjects [15] and in the general population [31], dissociation was highly associated with alexithymia. In contrast, in a group of hospitalized self-mutilating patients [32], in outpatients with psychiatric conditions [14], and among adolescents [18], no relationship was found between dissociation and alexithymia. In nonclinical samples, alexithymia and dissociation appear as interrelated but distinct phenomena [27], [33], [34] and [35]. Other studies yielded also that dissociation and alexithymia were correlated but fundamentally different phenomena [36], [37] and [38]. A previous study indicated that alexithymia, dissociation, and chronic anxiety are interrelated among men with alcoholism [39]. Consensus in these studies was that the negative affect, both anxiety [14] and [18] and depressive mood [36] and [38], might potentiate the severity of both alexithymia and dissociation. Our hypothesis was that dissociation and alexithymia may be interrelated constructs that are related to BPF. Also, we wanted to evaluate the effect of age, depression, and anxiety on these relationships. Because we consider them a patient group with a high risk for dissociative experiences [26] and [40], alexithymia [41], [42], [43] and [44], and BPF [3], [6] and [7], we decided to study on male patients with substance dependence. 2. Methods