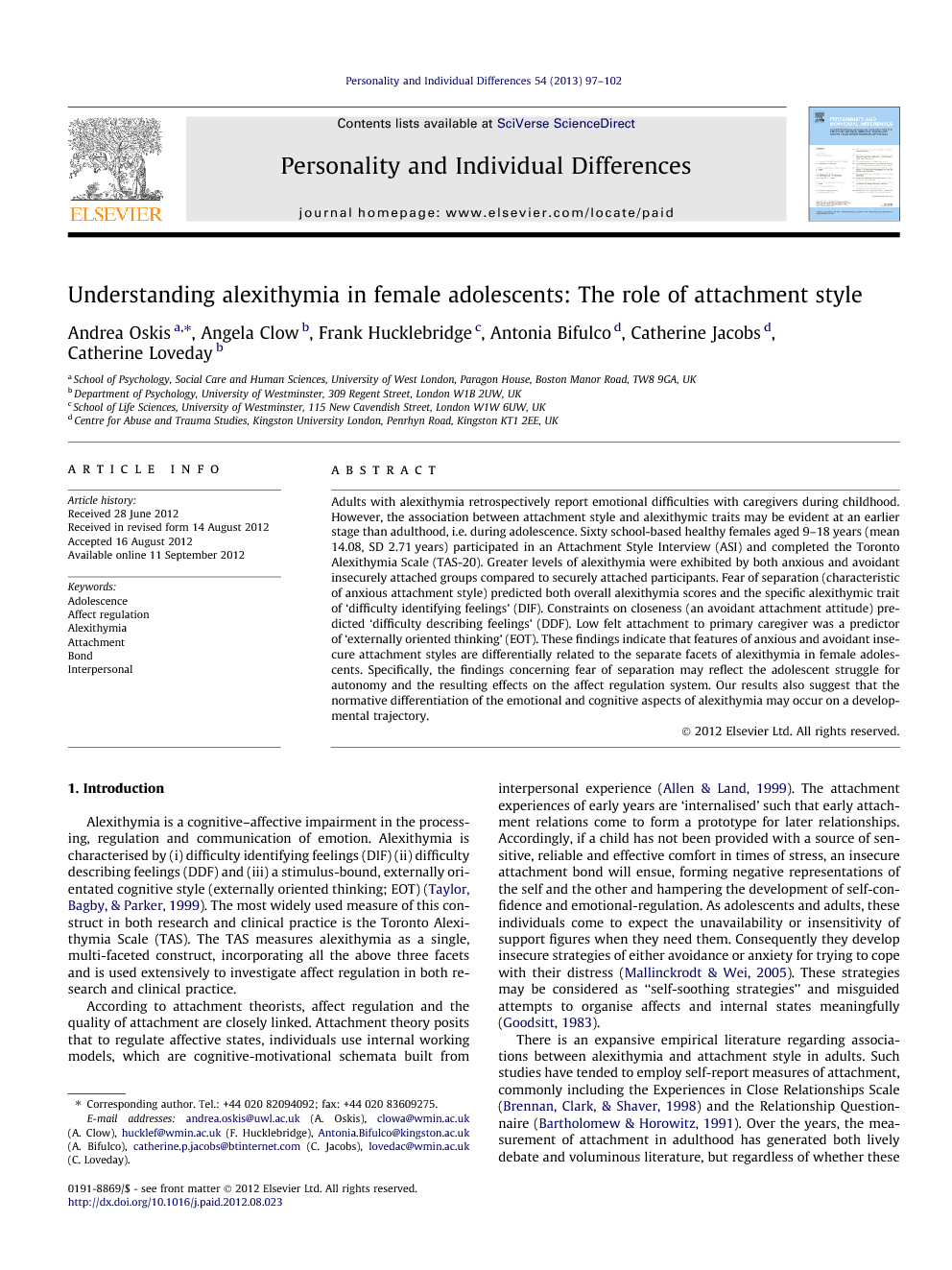 Adults with alexithymia retrospectively report emotional difficulties with caregivers during childhood. However, the association between attachment style and alexithymic traits may be evident at an earlier stage than adulthood, i.e. during adolescence. Sixty school-based healthy females aged 9–18 years (mean 14.08, SD 2.71 years) participated in an Attachment Style Interview (ASI) and completed the Toronto Alexithymia Scale (TAS-20). Greater levels of alexithymia were exhibited by both anxious and avoidant insecurely attached groups compared to securely attached participants. Fear of separation (characteristic of anxious attachment style) predicted both overall alexithymia scores and the specific alexithymic trait of ‘difficulty identifying feelings’ (DIF). Constraints on closeness (an avoidant attachment attitude) predicted ‘difficulty describing feelings’ (DDF). Low felt attachment to primary caregiver was a predictor of ‘externally oriented thinking’ (EOT). These findings indicate that features of anxious and avoidant insecure attachment styles are differentially related to the separate facets of alexithymia in female adolescents. Specifically, the findings concerning fear of separation may reflect the adolescent struggle for autonomy and the resulting effects on the affect regulation system. Our results also suggest that the normative differentiation of the emotional and cognitive aspects of alexithymia may occur on a developmental trajectory.

Alexithymia is a cognitive–affective impairment in the processing, regulation and communication of emotion. Alexithymia is characterised by (i) difficulty identifying feelings (DIF) (ii) difficulty describing feelings (DDF) and (iii) a stimulus-bound, externally orientated cognitive style (externally oriented thinking; EOT) (Taylor, Bagby, & Parker, 1999). The most widely used measure of this construct in both research and clinical practice is the Toronto Alexithymia Scale (TAS). The TAS measures alexithymia as a single, multi-faceted construct, incorporating all the above three facets and is used extensively to investigate affect regulation in both research and clinical practice. According to attachment theorists, affect regulation and the quality of attachment are closely linked. Attachment theory posits that to regulate affective states, individuals use internal working models, which are cognitive-motivational schemata built from interpersonal experience (Allen & Land, 1999). The attachment experiences of early years are ‘internalised’ such that early attachment relations come to form a prototype for later relationships. Accordingly, if a child has not been provided with a source of sensitive, reliable and effective comfort in times of stress, an insecure attachment bond will ensue, forming negative representations of the self and the other and hampering the development of self-confidence and emotional-regulation. As adolescents and adults, these individuals come to expect the unavailability or insensitivity of support figures when they need them. Consequently they develop insecure strategies of either avoidance or anxiety for trying to cope with their distress (Mallinckrodt & Wei, 2005). These strategies may be considered as “self-soothing strategies” and misguided attempts to organise affects and internal states meaningfully (Goodsitt, 1983). There is an expansive empirical literature regarding associations between alexithymia and attachment style in adults. Such studies have tended to employ self-report measures of attachment, commonly including the Experiences in Close Relationships Scale (Brennan, Clark, & Shaver, 1998) and the Relationship Questionnaire (Bartholomew & Horowitz, 1991). Over the years, the measurement of attachment in adulthood has generated both lively debate and voluminous literature, but regardless of whether these self-report assessments constitute categorical measures or continuous scales, they have in the main revealed two underlying attachment dimensions, most often characterised in terms of anxiety and avoidance, and they remain conceptually linked to the infant–mother attachment patterns originally identified by Ainsworth, Blehar, Waters, and Wall (1978). Within the extant literature that uses these self-report measures, findings remain varied despite all being drawn from adult community samples. Overall levels of alexithymia have been linked to both attachment-related anxiety and avoidance (Lang, 2010, Montebarocci et al., 2004 and Picardi et al., 2005), and fearful attachment in particular (Wearden, Lamberton, Crook, & Walsh, 2005). Regarding the separate facets of alexithymia, generally the affective alexithymic factors, DIF and DDF, have been linked to attachment anxiety whereas attachment avoidance has been associated with both DDF and the cognitive alexithymic trait of EOT (Lang, 2010 and Meins et al., 2008). Furthermore, alexithymia in adults has been shown to mediate associations between anxious and avoidant attachment style and both psychological distress and perceived social support, as well as health-related outcomes and behaviours (Mallinckrodt and Wei, 2005, Thorberg, Young, Sullivan, Lyvers et al., 2011 and Wearden et al., 2003). Other studies have sought to investigate alexithymia-attachment associations via the related concept of parental bonding, which theoretically is reflected in the attachment quality of the child across the lifespan. In adults, higher levels of alexithymia, have been associated with retrospective reports of parental overprotection and low maternal care (Thorberg, Young, Sullivan, & Lyvers, 2011). So, it may be that the presence of an overprotective, intrusive mother is a specific attachment element that impedes emotional regulation at a young age. From an attachment perspective, adolescence is a major transitional period and developing the capacity to regulate affect and behaviour independently of reliance on primary caregiver is a critical developmental task. Thus it may be that those adolescents who fear separation from caregivers are more alexithymic. Ideally though, emotional autonomy does not develop in isolation, but in the context of a close enduring relationships with parents; it is about the decreased dependence on the parental relationship, not the decreased importance of the bond ( Allen & Land, 1999). Therefore a greater emotional bond and feelings of security in relation to primary caregiver may predict less alexithymia in adolescents. Despite a sizable literature, the use of an intensive measure of current attachment style and behaviour is lacking. In addition, Montebarocci et al. (2004) acknowledge that the measurement of only self-reported interpersonal behaviour in this area is a limitation and suggest that interview measures, such as the Adult Attachment Interview (AAI), might be more robust. The AAI however focuses on an individual’s capacity to describe and evaluate salient early attachment experiences ( Hesse, 1999). The participant’s state of mind with respect to childhood experiences with parents is the basis for AAI classifications; it does not cover the current context of experience, in terms of the quality of an individual’s support network. The present study set out to examine links between alexithymia and current attachment style measured by interview in adolescents, and specifically whether different anxious and avoidant attachment characteristics would predict different alexithymic deficits. Alexithymia has been found to be related to less perceived support, fewer close relationships, family and social loneliness and having less social skill (Fukunishi, 2005), so an interview measure of attachment style which incorporates these elements into classification may provide a better insight. Therefore, we utilised the adolescent version of the Attachment Style Interview (ASI) (Bifulco, Moran, Ball, & Bernazzani, 2002), an investigator-based interview which uses a contextualised, support-focused approach to assess current interpersonal behaviour and attitudes. Our use of the ASI is in-keeping with the existing literature which has relied on self-report measures; both belong to the social psychology approach, since classification of attachment style is based on patterns of relating. We set out to examine a group of females because of previous literature in the area which has reported sex differences (Montebarocci et al., 2004). Specifically, in line with the transitional changes of adolescent attachment outlined above, we had the following specific hypotheses: (a) Anxious attachment style characteristics would positively predict alexithymia. (b) Support, as assessed by the ASI, would negatively predict alexithymia.