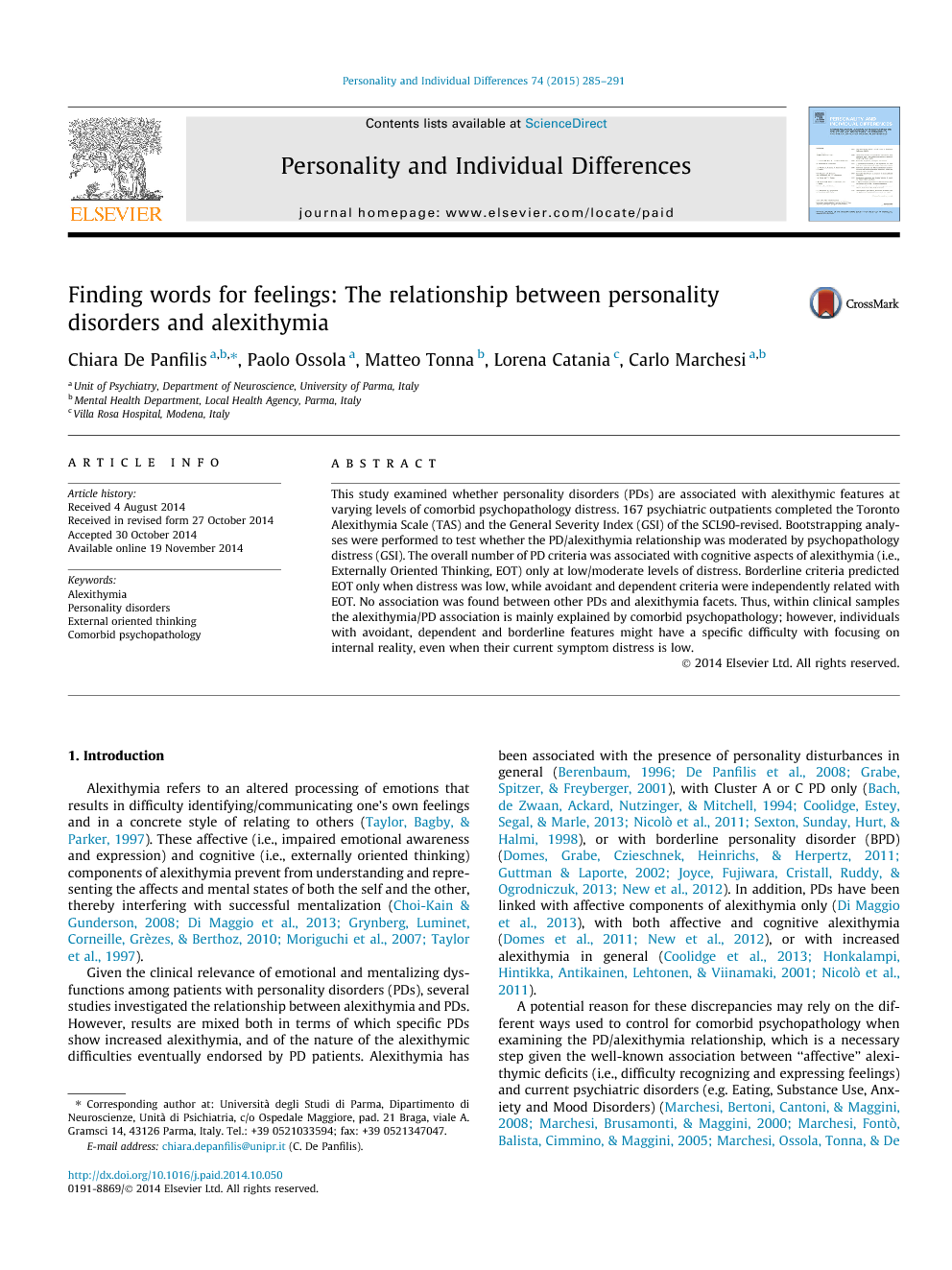 This study examined whether personality disorders (PDs) are associated with alexithymic features at varying levels of comorbid psychopathology distress. 167 psychiatric outpatients completed the Toronto Alexithymia Scale (TAS) and the General Severity Index (GSI) of the SCL90-revised. Bootstrapping analyses were performed to test whether the PD/alexithymia relationship was moderated by psychopathology distress (GSI). The overall number of PD criteria was associated with cognitive aspects of alexithymia (i.e., Externally Oriented Thinking, EOT) only at low/moderate levels of distress. Borderline criteria predicted EOT only when distress was low, while avoidant and dependent criteria were independently related with EOT. No association was found between other PDs and alexithymia facets. Thus, within clinical samples the alexithymia/PD association is mainly explained by comorbid psychopathology; however, individuals with avoidant, dependent and borderline features might have a specific difficulty with focusing on internal reality, even when their current symptom distress is low.

Alexithymia refers to an altered processing of emotions that results in difficulty identifying/communicating one’s own feelings and in a concrete style of relating to others (Taylor, Bagby, & Parker, 1997). These affective (i.e., impaired emotional awareness and expression) and cognitive (i.e., externally oriented thinking) components of alexithymia prevent from understanding and representing the affects and mental states of both the self and the other, thereby interfering with successful mentalization (Choi-Kain and Gunderson, 2008, Di Maggio et al., 2013, Grynberg et al., 2010, Moriguchi et al., 2007 and Taylor et al., 1997). Given the clinical relevance of emotional and mentalizing dysfunctions among patients with personality disorders (PDs), several studies investigated the relationship between alexithymia and PDs. However, results are mixed both in terms of which specific PDs show increased alexithymia, and of the nature of the alexithymic difficulties eventually endorsed by PD patients. Alexithymia has been associated with the presence of personality disturbances in general (Berenbaum, 1996, De Panfilis et al., 2008 and Grabe et al., 2001), with Cluster A or C PD only (Bach et al., 1994, Coolidge et al., 2013, Nicolò et al., 2011 and Sexton et al., 1998), or with borderline personality disorder (BPD) (Domes et al., 2011, Guttman and Laporte, 2002, Joyce et al., 2013 and New et al., 2012). In addition, PDs have been linked with affective components of alexithymia only (Di Maggio et al., 2013), with both affective and cognitive alexithymia (Domes et al., 2011 and New et al., 2012), or with increased alexithymia in general (Coolidge et al., 2013, Honkalampi et al., 2001 and Nicolò et al., 2011). A potential reason for these discrepancies may rely on the different ways used to control for comorbid psychopathology when examining the PD/alexithymia relationship, which is a necessary step given the well-known association between “affective” alexithymic deficits (i.e., difficulty recognizing and expressing feelings) and current psychiatric disorders (e.g. Eating, Substance Use, Anxiety and Mood Disorders) (Marchesi et al., 2008, Marchesi et al., 2000, Marchesi et al., 2005, Marchesi et al., 2014, Saarijavi et al., 2001 and Taylor et al., 1997). While most studies employing clinical populations did not control for the severity of concurrent psychiatric symptoms (De Panfilis et al., 2008, Domes et al., 2011 and Joyce et al., 2013), other studies deal with such issue by including non-clinical samples only (Coolidge et al., 2013) or selected PD samples with no current comorbidity (New et al., 2012), which, however, limits the generalizability of the findings to ‘real world’ PD patients. Importantly, after controlling for current psychopathology severity, overall alexithymia was unrelated with total PD criteria among treatment-seeking psychiatric outpatients (Di Maggio et al., 2013), suggesting that PD patients’ alexithymic deficits are accounted for by the emotional distress arising from their comorbid symptoms. However, since most patients with PD are driven to seek treatment by their concurrent psychological distress, within clinical samples the robust link between alexithymia and current psychopathology might also disguise any correlation between alexithymia and PD. For instance, Honkalampi et al. (2001) found that whereas alexithymia was unrelated with Cluster C PD among patients with active major depression, Cluster C comorbidity was nonetheless associated with lesser alexithymia decrease over a 6-month follow-up than pure major depression only. This suggests that the specific relationship between alexithymia and PD was disguised, during the acute depressive episode, by the stronger correlation between symptom severity and increasing alexithymia features. Thus, although some PD could be characterized by specific alexithymic difficulties, such association could be obscured by the presence of severe concurrent symptom distress, and can become apparent only at milder levels of psychopathology. Investigating whether (and which) alexithymic features are associated with PDs at varying levels of symptom severity has important treatment implications. If no association between PD and alexithymia is detected at any degree of current psychopathology distress, it would mean that PD patients are impaired in their ability to recognize/communicate/analyze emotions only because of their comorbid psychopathology; thus, such social-cognitive difficulties could be reduced by more vigorous efforts at decreasing their distress. Conversely, if alexithymia is specifically associated with PD at low levels of psychopathology, treatment should directly address PD patients’ difficulty to accurately process their own affects. Therefore, this exploratory study examined whether (and which) PDs are associated with overall alexithymia and its affective and cognitive components depending on different levels of current psychopathology severity. Based on previous research, we expected that for patients with high symptom distress alexithymia (and, particularly, its affective component) might not be related with PD features, but only with the current state of symptom severity; however, for individuals with low psychopathology distress, a specific relationship between some PDs and definite components of alexithymia could emerge.

These results suggest that PDs in general are not invariably associated, per se, with a deficit in identifying and communicating emotions. Rather, such difficulties are likely to be fostered by their comorbid psychiatric symptom severity. However, individuals with increasing overall personality disorder features criteria and particularly avoidant, dependent and borderline traits might find it hard focusing on their own and others’ inner feelings, even when their symptom distress is low. Thus, PD patients might benefit from interventions aimed at reducing their alexithymic features by targeting both their comorbid psychiatric symptoms and their poor focus on internal reality, thereby increasing their social-cognitive skills and favouring their interpersonal adjustment.