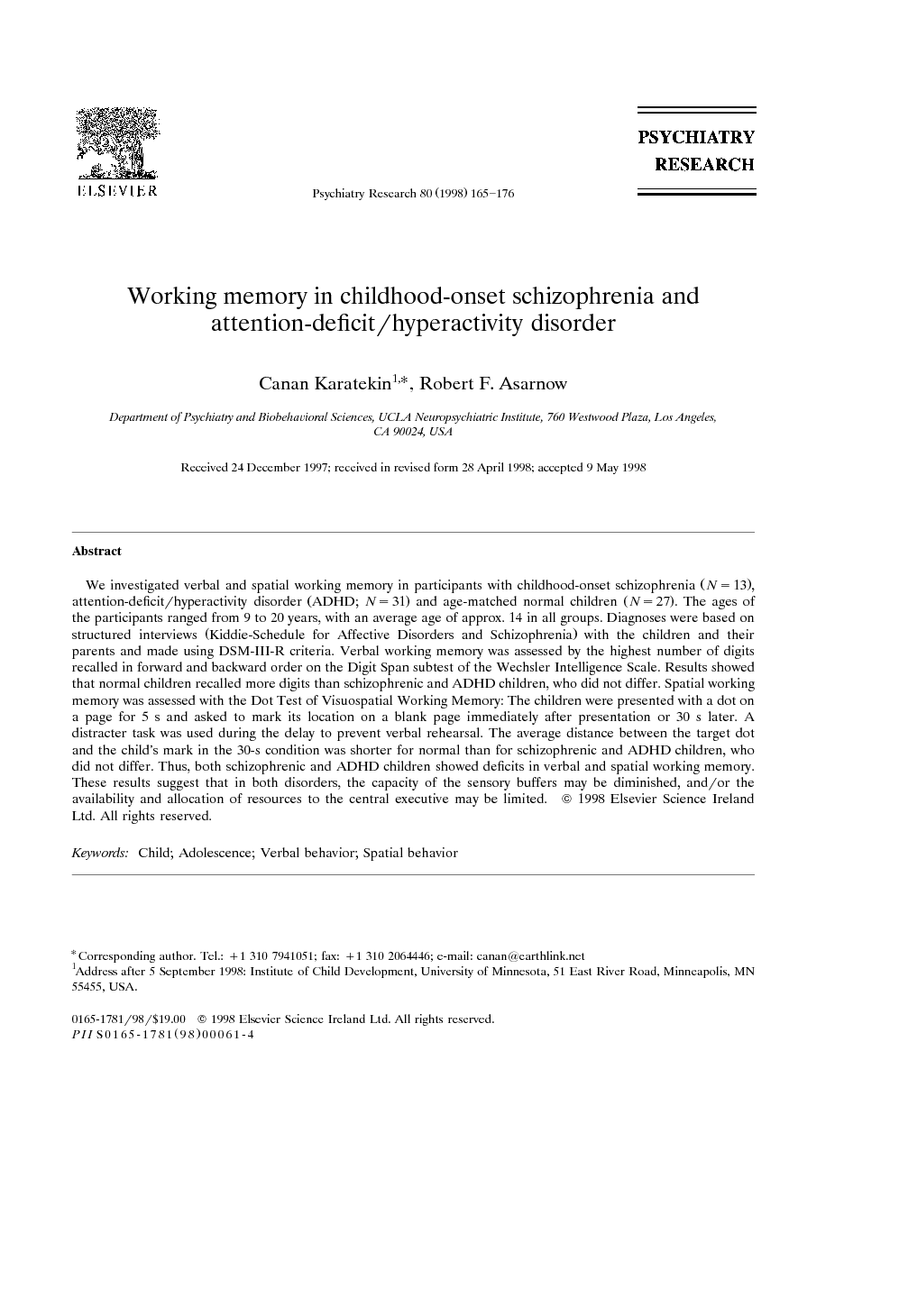 We investigated verbal and spatial working memory in participants with childhood-onset schizophrenia (N=13), attention-deficit/hyperactivity disorder (ADHD; N=31) and age-matched normal children (N=27). The ages of the participants ranged from 9 to 20 years, with an average age of approx. 14 in all groups. Diagnoses were based on structured interviews (Kiddie-Schedule for Affective Disorders and Schizophrenia) with the children and their parents and made using DSM-III-R criteria. Verbal working memory was assessed by the highest number of digits recalled in forward and backward order on the Digit Span subtest of the Wechsler Intelligence Scale. Results showed that normal children recalled more digits than schizophrenic and ADHD children, who did not differ. Spatial working memory was assessed with the Dot Test of Visuospatial Working Memory: The children were presented with a dot on a page for 5 s and asked to mark its location on a blank page immediately after presentation or 30 s later. A distracter task was used during the delay to prevent verbal rehearsal. The average distance between the target dot and the child's mark in the 30-s condition was shorter for normal than for schizophrenic and ADHD children, who did not differ. Thus, both schizophrenic and ADHD children showed deficits in verbal and spatial working memory. These results suggest that in both disorders, the capacity of the sensory buffers may be diminished, and/or the availability and allocation of resources to the central executive may be limited.

Working memory is a limited-capacity system that stores information for brief periods of time (Baddeley, 1996b). It is thought to underlie a wide range of cognitive processes, from remembering a phone number for a few seconds to planning, learning, reasoning and comprehension (Baddeley, 1996b). According to Baddeley, working memory can be divided into limited-capacity subsystems (Baddeley, 1996b). Acoustic or speech-based information is stored in the phonological buffer for 2–3 s. Visual (i.e. color and shape) and spatial (i.e. location) information are held in separate but interacting buffers (Mecklinger and Müller, 1996 and Baddeley, 1996b). Maintenance of information in the phonological buffer is accomplished through subvocal rehearsal. An analogous, but less well-understood, process is responsible for maintaining visual–spatial information. A central executive provides strategic attentional control of the operation of these buffers and coordinates their activities (Baddeley, 1996b). An impairment in working memory has been hypothesized to constitute a core deficit in schizophrenia (Goldman-Rakic, 1994 and Cohen et al., 1996). Deficits in executive functions, learning, and inhibition, all of which can be at least partly attributed to deficits in working memory, are also thought to play a key role in attention-deficit/hyperactivity disorder (ADHD) (e.g. Hamlett et al., 1987, Shue and Douglas, 1992, Pennington et al., 1993, Barkley, 1997, Castellanos, 1997 and Tannock, 1998). However, working memory has not yet been compared directly in the two groups. The present study compared the performance of schizophrenic and ADHD children on tests of verbal and spatial working memory. Verbal working memory was assessed on the Digit Span, a task on which participants are asked to repeat strings of digits in forward and backward order. Studies with ADHD individuals generally show reduced digit span (Loge et al., 1990, Faraone et al., 1993, Biederman et al., 1996 and Mariani and Barkley, 1997), although normal performance has also been reported (Benezra and Douglas, 1988 and Shue and Douglas, 1992). Research on the Digit Span is inconsistent in schizophrenia, with some studies finding normal forward and backward spans (e.g. Park and Holzman, 1992, Morice and Delahunty, 1996, Javitt et al., 1997 and Shedlack et al., 1997), and others finding reduced forward and backward spans (e.g. Beatty et al., 1993 and Stirling et al., 1997). We predicted that ADHD children would have a reduced span compared to normal children, but did not make strong predictions regarding the performance of schizophrenic children. Spatial working memory deficits have been found consistently in schizophrenic individuals on studies using a variety of tasks, delay periods, and control groups (Park and Holzman, 1992Spitzer, 1993Crawford et al., 1995Keefe et al., 1995Park et al., 1995Carter et al., 1996Fleming et al., 1997). The stimuli to be remembered in these tasks ranged from one to four, the delay periods ranged from 0 to 30 s, and control groups included individuals with bipolar and other psychiatric disorders. Spatial working memory deficits have not been studied as much or demonstrated as consistently in ADHD. Shue and Douglas (1992), for instance, found no difference between ADHD and normal children on immediate incidental recall of spatial location. In another study (Ross et al., 1994) that used a task similar to the one used by Park and Holzman (1992), ADHD and normal children viewed a target that could appear at one of 10 locations and looked at its remembered position after a delay of 800 ms. Although there were no group differences in saccadic gain or response times, ADHD children on or off methylphenidate had difficulty inhibiting reflexive saccades during the delay period. The only study to find a deficit in spatial working memory compared preschool boys with ADHD to normal control subjects on a task that required the children to remember the spatial location of pictures (Mariani and Barkley, 1997). In the present study, we assessed spatial working memory on a test used by Keefe et al. (1995)in a study of schizophrenic and normal adults (Dot Test of Visuospatial Memory). Keefe et al. assessed spatial working memory by presenting participants with a single dot on a sheet of paper. After a delay of 0 or 30 s, during which they read aloud a list of words, participants were asked to mark on a blank page the remembered location of the dot. Although distance error was greater in schizophrenic than in normal individuals at both delay conditions, schizophrenic individuals showed a relatively greater deficit at the longer delay. Based on Keefe et al. (1995)and the previous studies noted above, we predicted that schizophrenic children would perform more poorly than normal children at both the 0- and 30-s delay conditions. In addition, we expected schizophrenic children to show a faster decay of spatial working memory (i.e. greater decrement in performance at the longer delay compared to normal children). We expected that ADHD children would also show an abnormally fast decay of spatial working memory and predicted that they would differ from normal children at delayed but not at immediate recall. However, because spatial working memory deficits have not been observed consistently in ADHD, we expected the spatial working memory deficit to be greater in schizophrenic than in ADHD children.