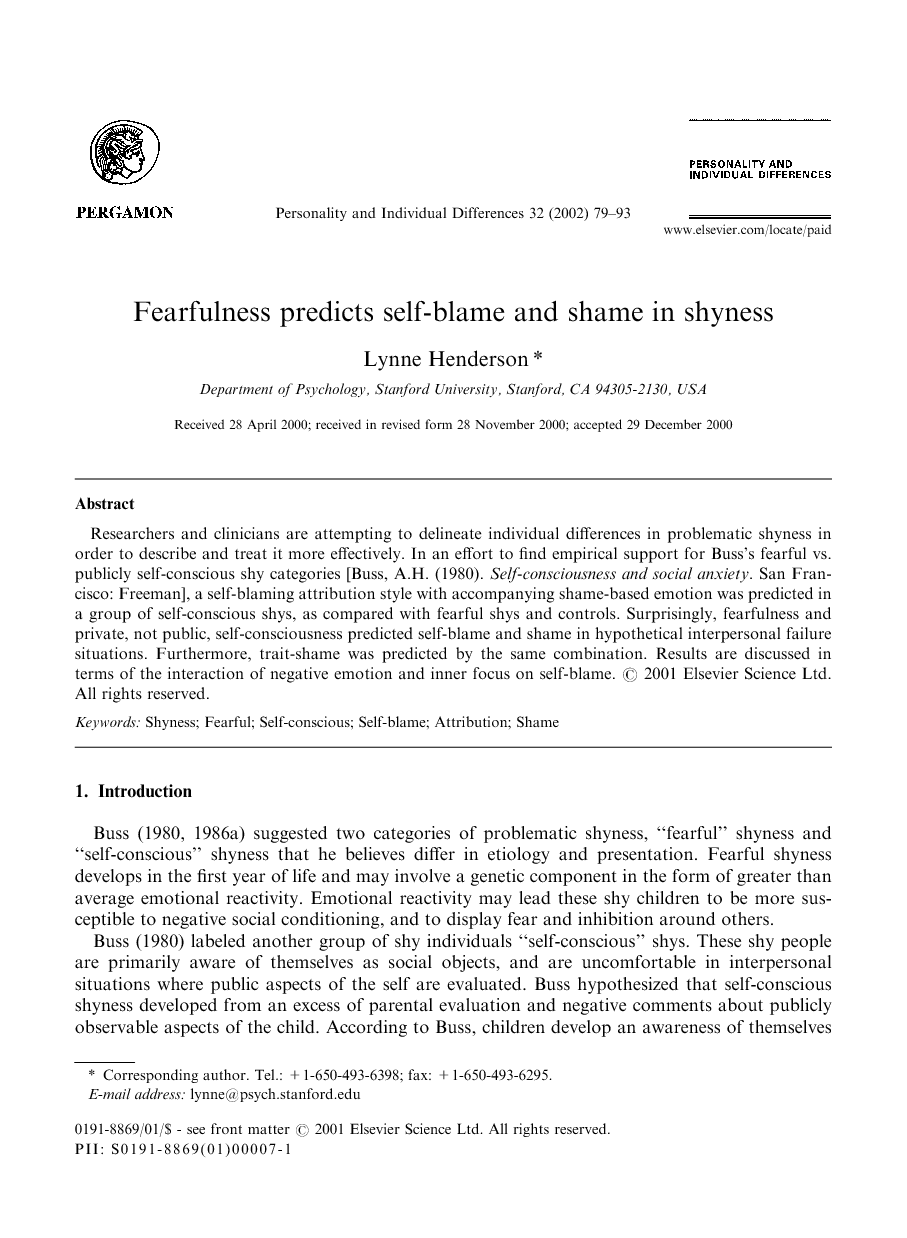 Researchers and clinicians are attempting to delineate individual differences in problematic shyness in order to describe and treat it more effectively. In an effort to find empirical support for Buss's fearful vs. publicly self-conscious shy categories [Buss, A.H. (1980). Self-consciousness and social anxiety. San Francisco: Freeman], a self-blaming attribution style with accompanying shame-based emotion was predicted in a group of self-conscious shys, as compared with fearful shys and controls. Surprisingly, fearfulness and private, not public, self-consciousness predicted self-blame and shame in hypothetical interpersonal failure situations. Furthermore, trait-shame was predicted by the same combination. Results are discussed in terms of the interaction of negative emotion and inner focus on self-blame.

Buss, 1980 and Buss, 1986a) suggested two categories of problematic shyness, “fearful” shyness and “self-conscious” shyness that he believes differ in etiology and presentation. Fearful shyness develops in the first year of life and may involve a genetic component in the form of greater than average emotional reactivity. Emotional reactivity may lead these shy children to be more susceptible to negative social conditioning, and to display fear and inhibition around others. Buss (1980) labeled another group of shy individuals “self-conscious” shys. These shy people are primarily aware of themselves as social objects, and are uncomfortable in interpersonal situations where public aspects of the self are evaluated. Buss hypothesized that self-conscious shyness developed from an excess of parental evaluation and negative comments about publicly observable aspects of the child. According to Buss, children develop an awareness of themselves as social objects between the ages of three and six (Buss, 1986a). If they are evaluated frequently and negatively, interpersonal events may become associated with negative outcomes. Despite the plausibility of Buss's theory, only one study has examined either the etiology or the nature of these categories. Bruch, Giordano, and Pearl (1986) compared college students who were classified as fearful shys, self-conscious shys, non-shys, or previous shys. The findings were mixed. The only statistically significant difference between fearful shys and self-conscious shys was that fearful shys reported more somatic anxiety and debilitating arousal. The two shyness groups also failed to differ in predicted competence areas, for example, seeking career information, assertive responses, and social skills knowledge. In spite of the lack of demonstrated differences in competence, if Buss's theory is correct we could predict that self-conscious shys would be more self-critical in social situations, and see themselves as causal in social situations with negative outcomes, perhaps blaming themselves for negative social outcomes and experiencing negative emotions such as shame. 1.1. Social anxiety and causal attributions Evidence for the tendency to see the self as causal has been demonstrated by many studies which have shown reversals of the self-serving bias in social anxiety (Arkin et al., 1980, Clark and Arkowitz, 1975, Girodo et al., 1981, Minsky, 1985, Teglasi and Hoffman, 1982, Zimbardo, 1997 and Miller and Arkowitz, 1977). That is, shy people reverse the tendency of the average person to attribute success to internal conditions such as ability or skill and failure to external causes such as task difficulty or bad luck (Federoff & Harvey, 1976). Furthermore, Teglasi, and Fagin (1984) found that negative self-evaluation in socially anxious individuals was accompanied by higher expectancies for others' success in problematic social situations, demonstrating self-other discrepancies in attribution style. Moreover, the manipulated misattribution of arousal symptoms to background noise during social interaction (Brodt & Zimbardo, 1981), has led to greater verbal facility and assertiveness on the part of shy subjects, comparable to controls in the same condition, and a stronger preference for further affiliation, beyond controls however, see Slivken & Buss, 1984, with speech-anxious subjects. Less heart rate change from baseline was observed when subjects were led to misattribute social anxiety to background noise (Leary, 1986), and fewer speech dysfluencies when subjects giving speeches were told that arousal was attributable to subliminal noise (Olson, 1988). These results suggest that both the arousal and behavioral inhibition found in shyness may be affected by manipulating attribution. In summary, socially anxious subjects appear to reverse the self-serving bias found in people in general and attribute negative social outcomes to themselves. If they experience a difference between their actual performance and their desired performance, shame probably follows. A possible theoretical rationale for these findings will be presented in the next section. 1.2. Self-awareness and causal attributions Attribution theory (Weiner, 1986) includes the idea that negative emotion influences irrational attributions, suggesting a reciprocal process that could escalate both negative self-attributions and negative emotion. In addition to motivation and emotion, private self-awareness, the state variable, and private self-consciousness, the trait variable, have also been found to influence attributions of causality in social situations. Subjects in front of a mirror (which has been found to induce self-awareness) attribute more responsibility to themselves for hypothetical situations than those who are not facing a mirror (Duval & Wicklund, 1973), and dispositionally high private self-conscious subjects attribute more responsibility to themselves in hypothetical situations than low private self-conscious subjects (Buss & Scheier, 1976). In accord with attribution theory is the appraisal theory of Ortony, Clore, and Collins (1988), which states that attribution emotions are a subset of emotions caused by reactions to agents of actions who are viewed as acting in a praiseworthy or blameworthy fashion. If the self is the agent being approved or disapproved, the emotion is pride or shame depending on praiseworthiness or blameworthiness of the action. Therefore, shame-based emotion will occur if blame is attributed to the self. Because it has been shown that socially anxious individuals in interpersonal situations tend to attribute failure to themselves (Arkin et al., 1980 and Sabogal, 1983), attribution emotions in the form of shame or self-reproach should follow. Based on Buss's theory (1980), attribution theory, the cognitive appraisal theory of Ortony et al. (1988), and previous empirical findings, this study attempted to differentiate self-conscious shys, fear shys, and controls along the parameter of attribution of blame to the self in hypothetical interpersonal situations where failure occurred. Self-conscious shys were hypothesized to be more likely than fear shys and controls to attribute blame to the self and to experience shame-based emotion. We also predicted that self-conscious shys would score significantly higher than fear shys and controls on a dispositional measure of shame. Furthermore, self-conscious shys who were high in both public and private self-consciousness were expected to attribute more blame to the self and experience more shame-based emotions than all the other groups.