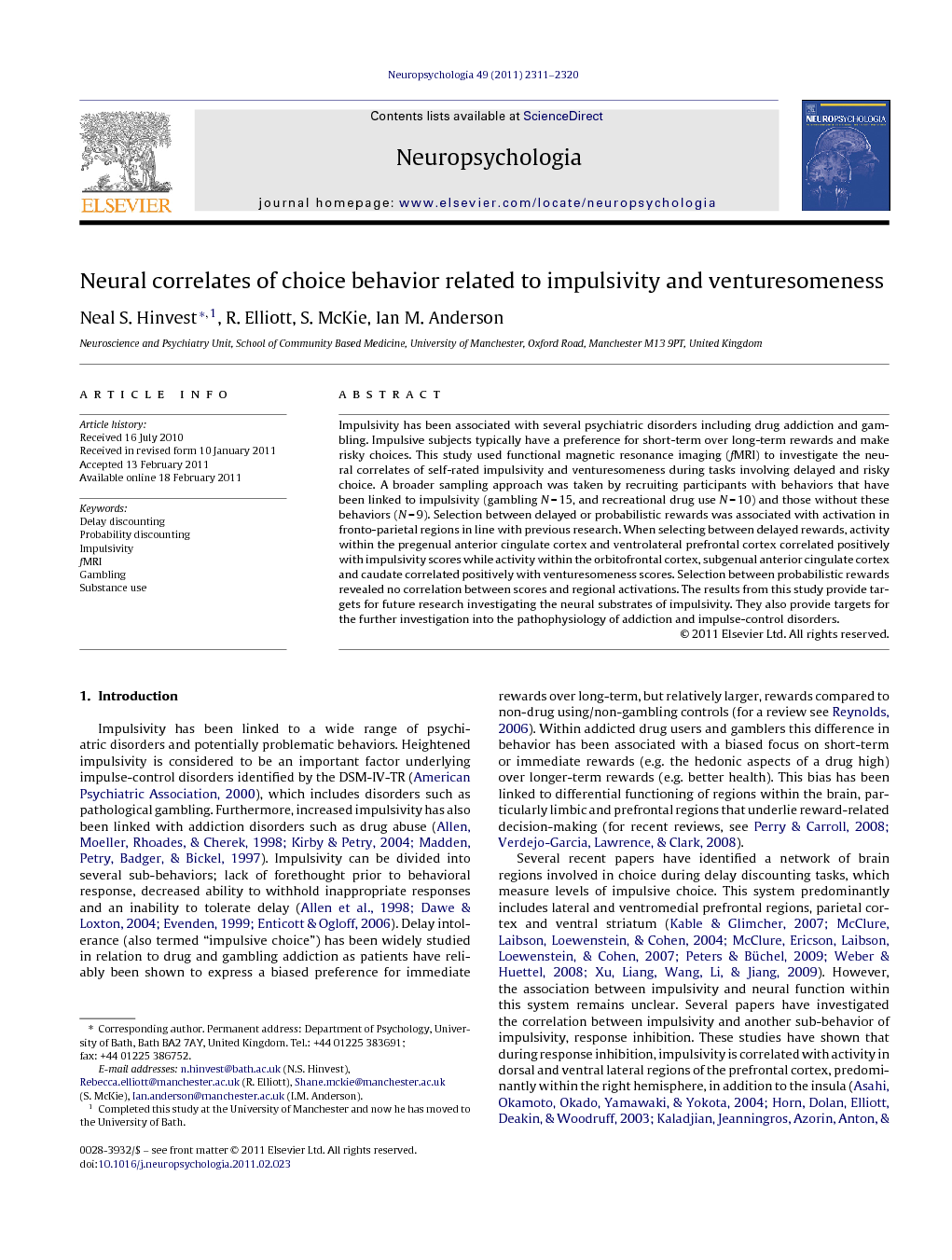 Impulsivity has been associated with several psychiatric disorders including drug addiction and gambling. Impulsive subjects typically have a preference for short-term over long-term rewards and make risky choices. This study used functional magnetic resonance imaging (fMRI) to investigate the neural correlates of self-rated impulsivity and venturesomeness during tasks involving delayed and risky choice. A broader sampling approach was taken by recruiting participants with behaviors that have been linked to impulsivity (gambling N = 15, and recreational drug use N = 10) and those without these behaviors (N = 9). Selection between delayed or probabilistic rewards was associated with activation in fronto-parietal regions in line with previous research. When selecting between delayed rewards, activity within the pregenual anterior cingulate cortex and ventrolateral prefrontal cortex correlated positively with impulsivity scores while activity within the orbitofrontal cortex, subgenual anterior cingulate cortex and caudate correlated positively with venturesomeness scores. Selection between probabilistic rewards revealed no correlation between scores and regional activations. The results from this study provide targets for future research investigating the neural substrates of impulsivity. They also provide targets for the further investigation into the pathophysiology of addiction and impulse-control disorders.

Impulsivity has been linked to a wide range of psychiatric disorders and potentially problematic behaviors. Heightened impulsivity is considered to be an important factor underlying impulse-control disorders identified by the DSM-IV-TR (American Psychiatric Association, 2000), which includes disorders such as pathological gambling. Furthermore, increased impulsivity has also been linked with addiction disorders such as drug abuse (Allen et al., 1998, Kirby and Petry, 2004 and Madden et al., 1997). Impulsivity can be divided into several sub-behaviors; lack of forethought prior to behavioral response, decreased ability to withhold inappropriate responses and an inability to tolerate delay (Allen et al., 1998, Dawe and Loxton, 2004, Evenden, 1999 and Enticott and Ogloff, 2006). Delay intolerance (also termed “impulsive choice”) has been widely studied in relation to drug and gambling addiction as patients have reliably been shown to express a biased preference for immediate rewards over long-term, but relatively larger, rewards compared to non-drug using/non-gambling controls (for a review see Reynolds, 2006). Within addicted drug users and gamblers this difference in behavior has been associated with a biased focus on short-term or immediate rewards (e.g. the hedonic aspects of a drug high) over longer-term rewards (e.g. better health). This bias has been linked to differential functioning of regions within the brain, particularly limbic and prefrontal regions that underlie reward-related decision-making (for recent reviews, see Perry and Carroll, 2008 and Verdejo-Garcia et al., 2008). Several recent papers have identified a network of brain regions involved in choice during delay discounting tasks, which measure levels of impulsive choice. This system predominantly includes lateral and ventromedial prefrontal regions, parietal cortex and ventral striatum (Kable and Glimcher, 2007, McClure et al., 2004, McClure et al., 2007, Peters and Büchel, 2009, Weber and Huettel, 2008 and Xu et al., 2009). However, the association between impulsivity and neural function within this system remains unclear. Several papers have investigated the correlation between impulsivity and another sub-behavior of impulsivity, response inhibition. These studies have shown that during response inhibition, impulsivity is correlated with activity in dorsal and ventral lateral regions of the prefrontal cortex, predominantly within the right hemisphere, in addition to the insula (Asahi et al., 2004, Horn et al., 2003 and Kaladjian et al., 2011) indicating that the performance of these areas may be sensitive to individual levels of impulsivity. One issue when investigating the effects of impulsivity on substance abuse is that it is unclear whether impulsivity pre-dates substance use or is due to neurochemical consequences of substance abuse. The study of pathological gamblers, which has been termed a “behavioral addiction” and thus one where direct physiologically or neuropsychological harmful effects of the addiction are absent, is less confounded by this issue. There is increasing evidence that impulsivity pre-dates gambling addiction and may be a vulnerability marker for the development of other addictive behaviors including substance abuse (for a recent review in this area, see Verdejo-Garcia et al., 2008). Venturesomeness identifies a different dimension to impulsivity as described above (Kirby & Finch, 2010) and includes sensation or thrill seeking and taking risks for pleasure (Eysenck et al., 1990 and Eysenck et al., 1985). It has received relatively less study than impulsivity despite evidence for greater self-reported venturesomeness in pathological samples, such as ecstasy and polydrug users, compared to controls (Butler and Montgomery, 2004, Allen et al., 1998 and Morgan, 1998) although a recent paper found no such effect (Clark, Roiser, Robbins, & Sahakian, 2009). Choice involving risk activates decision-making brain networks including prefrontal cortex, parietal cortex, insula and dorsal striatum (Koeneke et al., 2008 and Smith et al., 2009). Activity within dorsal and ventromedial prefrontal cortices and the insula has been correlated with risk-seeking attitude (Clark et al., 2008, Knoch et al., 2006 and Steinberg, 2008) however it is unclear as to how variations in brain activity are linked to venturesomeness. The current study investigates whether regions of the brain associated with inter-temporal choice and risky choice (using novel delay and probability discounting tasks) are associated with self-reported impulsivity and venturesomeness. Previous studies have predominantly investigated non-gambling/non-drug using participants, or comparisons between pathological and control groups, which may limit the general applicability of such findings to the wider population. To address this, we recruited an enriched sample including drug users and gamblers so as to obtain a range of impulsivity and venturesomeness scores linked to behavioral consequences. We then used a correlational approach to relate region-specific neural responses to choices involving delays or risk similar to that in a previous study of memory (Valdes et al., 2006). Using a broader sampling approach allows investigation of potential biological vulnerability markers for addiction and provides targets for future research into the underlying mechanisms of pathological behavior. Based upon the literature, we hypothesised that intertemporal and risk-related choice would be associated with activity in prefrontal and anterior cingulate cortices (Kable and Glimcher, 2007, Koeneke et al., 2008, McClure et al., 2004, McClure et al., 2007, Peters and Büchel, 2009, Smith et al., 2009, Weber and Huettel, 2008 and Xu et al., 2009). We also undertook exploratory analysis to investigate whether impulsivity and venturesomeness would correlate with neural activity in different brain areas during intertemporal and risk-related choice.