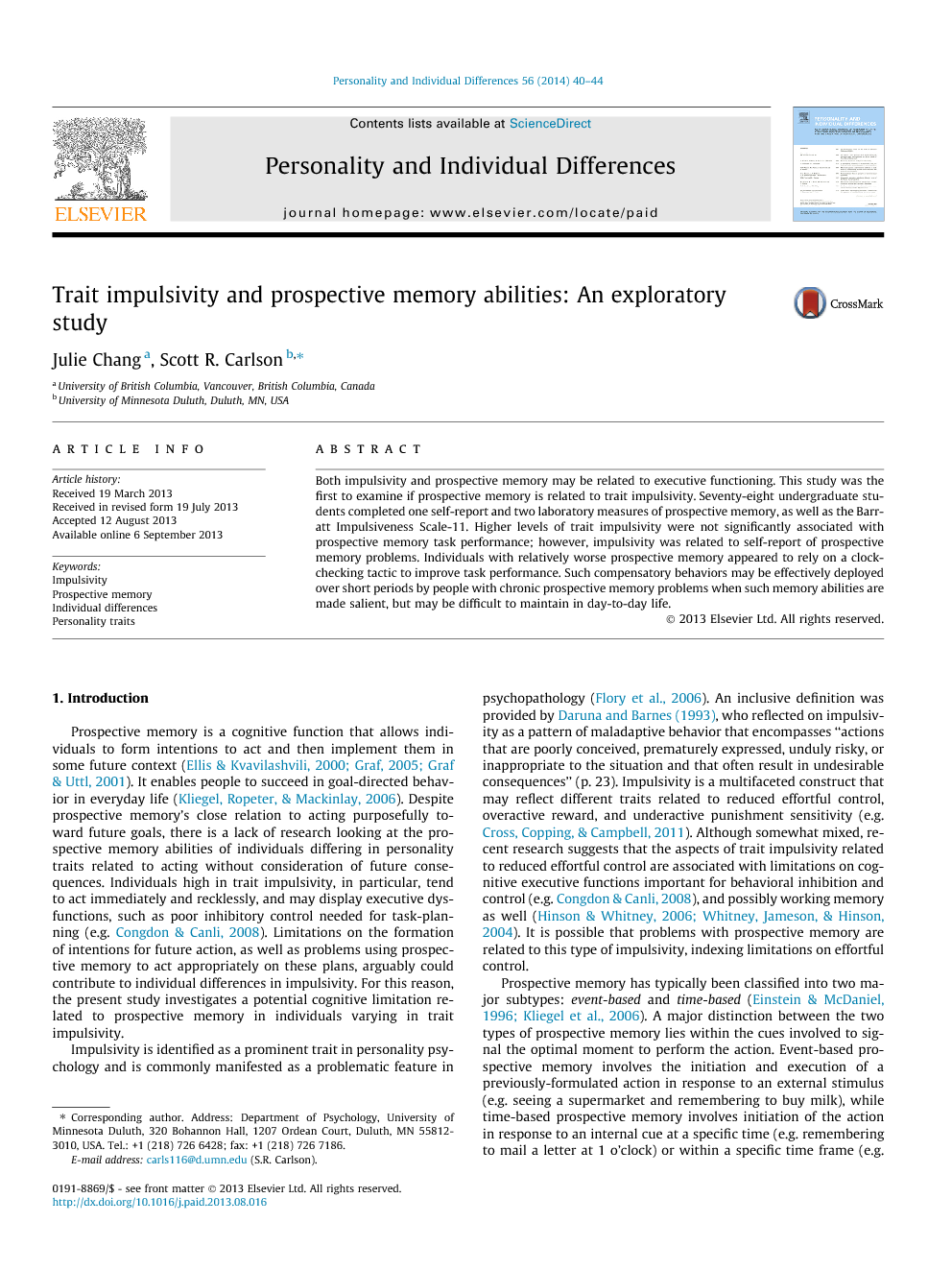 Prospective memory is a cognitive function that allows individuals to form intentions to act and then implement them in some future context (Ellis and Kvavilashvili, 2000, Graf, 2005 and Graf and Uttl, 2001). It enables people to succeed in goal-directed behavior in everyday life (Kliegel, Ropeter, & Mackinlay, 2006). Despite prospective memory’s close relation to acting purposefully toward future goals, there is a lack of research looking at the prospective memory abilities of individuals differing in personality traits related to acting without consideration of future consequences. Individuals high in trait impulsivity, in particular, tend to act immediately and recklessly, and may display executive dysfunctions, such as poor inhibitory control needed for task-planning (e.g. Congdon & Canli, 2008). Limitations on the formation of intentions for future action, as well as problems using prospective memory to act appropriately on these plans, arguably could contribute to individual differences in impulsivity. For this reason, the present study investigates a potential cognitive limitation related to prospective memory in individuals varying in trait impulsivity. Impulsivity is identified as a prominent trait in personality psychology and is commonly manifested as a problematic feature in psychopathology (Flory et al., 2006). An inclusive definition was provided by Daruna and Barnes (1993), who reflected on impulsivity as a pattern of maladaptive behavior that encompasses “actions that are poorly conceived, prematurely expressed, unduly risky, or inappropriate to the situation and that often result in undesirable consequences” (p. 23). Impulsivity is a multifaceted construct that may reflect different traits related to reduced effortful control, overactive reward, and underactive punishment sensitivity (e.g. Cross, Copping, & Campbell, 2011). Although somewhat mixed, recent research suggests that the aspects of trait impulsivity related to reduced effortful control are associated with limitations on cognitive executive functions important for behavioral inhibition and control (e.g. Congdon & Canli, 2008), and possibly working memory as well (Hinson and Whitney, 2006 and Whitney et al., 2004). It is possible that problems with prospective memory are related to this type of impulsivity, indexing limitations on effortful control. Prospective memory has typically been classified into two major subtypes: event-based and time-based ( Einstein and McDaniel, 1996 and Kliegel et al., 2006). A major distinction between the two types of prospective memory lies within the cues involved to signal the optimal moment to perform the action. Event-based prospective memory involves the initiation and execution of a previously-formulated action in response to an external stimulus (e.g. seeing a supermarket and remembering to buy milk), while time-based prospective memory involves initiation of the action in response to an internal cue at a specific time (e.g. remembering to mail a letter at 1 o’clock) or within a specific time frame (e.g. remembering to call a friend back in 30 min). Recent theories regarding prospective memory suggest that there is a further distinction between the two memory types in terms of their executive demands. For example, time-based memory may depend more on executive control processes than event-based prospective memory ( Einstein & McDaniel, 1990). One contention is that unlike event-based tasks, which are triggered by external cues, time-based prospective memory tasks require more mental effort because they rely on a self-initiated response when external cues may be absent ( Einstein and McDaniel, 1990, Khan et al., 2008 and Nater et al., 2006). However, others have claimed that this distinction may not be useful in the natural settings where external chronometers are available to serve as event-based cues (e.g. Graf & Grondin, 2006). It is proposed that prospective memory cues offer different information about the predictability of imminent situations in which it is appropriate to execute the plan. This may be a sort of proximity calculation ( Graf & Grondin, 2006), with an estimate of greater proximity indicating the appropriateness of action, be it within a relative time frame or in the presence of the target cue. From this perspective, the core distinction between time-based and event-based prospective memory is suggested to be the extent to which one is able to estimate how close the approaching cue is, and the features that make such calculations possible (e.g. how close is the cue in terms of time and/or spatial location to the point of appropriate retrieval; Graf & Grondin, 2006). Although an alternative view has been suggested regarding the underlying attention mechanisms and the level of cognitive demands the two types of prospective memory require (e.g. see Park, Hertzog, Kidder, Morrell, & Mayhorn, 1997), overall, there seems to be consensus regarding the requirement of central executive resources and this does not seem to differ regardless of the approach one takes in construing prospective memory classifications. Although trait impulsivity and prospective memory have not been previously examined together, there are reasons to suspect that prospective memory function may vary with individual differences in impulsivity. As mentioned previously, individuals high in impulsivity may have poorer working memory and executive abilities, both of which are suggested to be central to prospective memory function (e.g. Heffernan et al., 2001 and Martin et al., 2003). It has been suggested that working memory plays an important role because it allows the individual to hold a representation of the intended action online, schedule an appropriate response, and monitor the performance of those responses (e.g. Basso et al., 2010 and Einstein et al., 1997). If executive functions are related to trait impulsivity, and if some of these functions are critical for prospective memory, it is reasonable to hypothesize that impulsivity will be related to measures of prospective memory. Poor prospective memory may be related to problems with planning for and conceptualizing the future which are central to some views of impulsivity (e.g. Keough, Zimbardo, & Boyd, 1999). In the present study, undergraduate students completed multiple measures of prospective memory, including a self-report, a time-based task and an event-based task. Trait impulsivity was assessed with the Barratt Impulsiveness Scale-11 (BIS-11; Patton, Stanford, & Barratt, 1995), a measure previously related to problems with effortful control (e.g. Goya-Maldonado et al., 2010 and Kam et al., 2012). We hypothesized that higher levels of impulsivity would be related to worse prospective memory and that this would be relatively more pronounced on time-based rather than event-based tasks because of the putatively greater demands on executive functions which are thought to be limited in impulsive individuals.