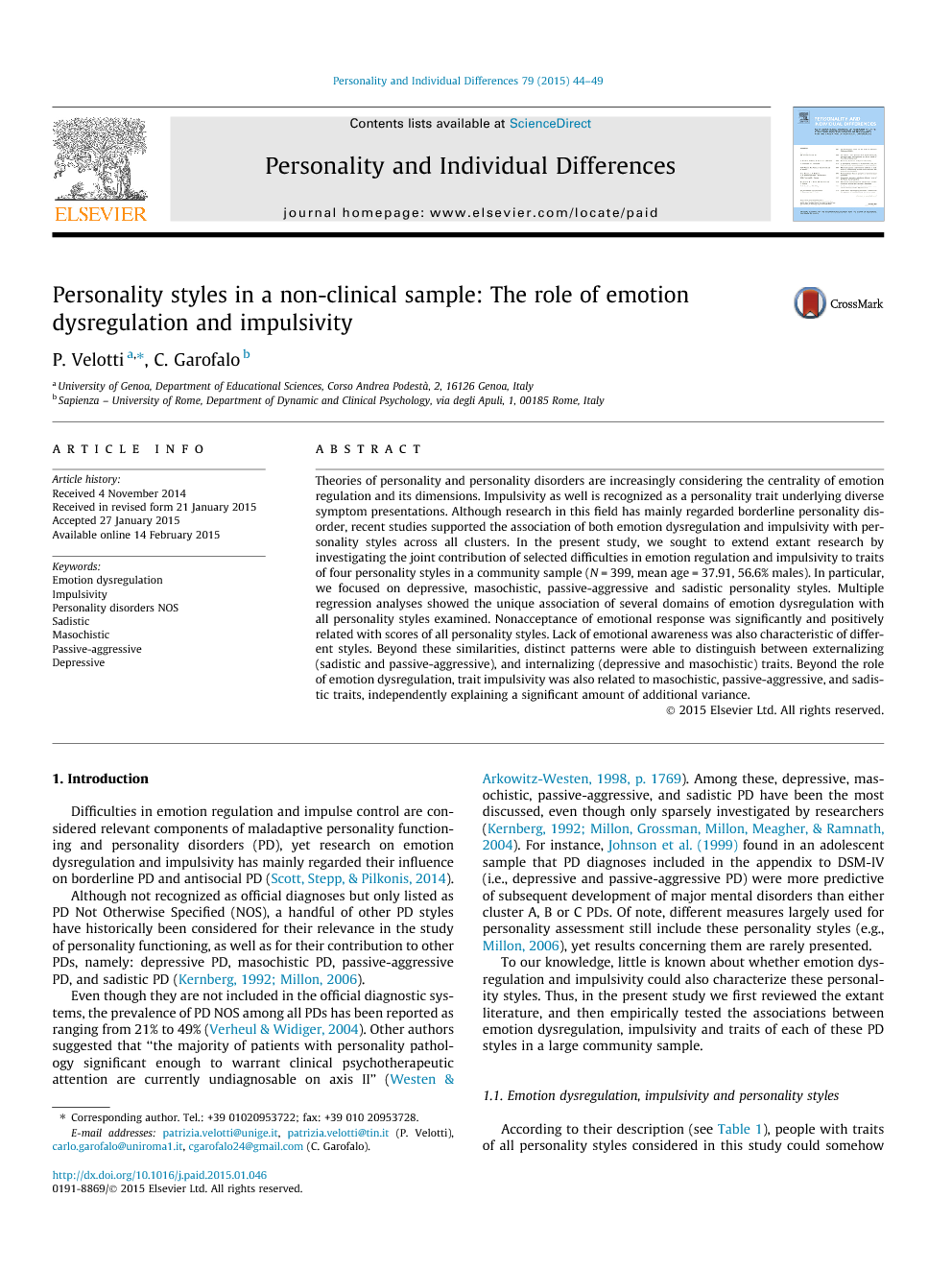 Difficulties in emotion regulation and impulse control are considered relevant components of maladaptive personality functioning and personality disorders (PD), yet research on emotion dysregulation and impulsivity has mainly regarded their influence on borderline PD and antisocial PD (Scott, Stepp, & Pilkonis, 2014). Although not recognized as official diagnoses but only listed as PD Not Otherwise Specified (NOS), a handful of other PD styles have historically been considered for their relevance in the study of personality functioning, as well as for their contribution to other PDs, namely: depressive PD, masochistic PD, passive-aggressive PD, and sadistic PD (Kernberg, 1992 and Millon, 2006). Even though they are not included in the official diagnostic systems, the prevalence of PD NOS among all PDs has been reported as ranging from 21% to 49% (Verheul & Widiger, 2004). Other authors suggested that “the majority of patients with personality pathology significant enough to warrant clinical psychotherapeutic attention are currently undiagnosable on axis II” (Westen & Arkowitz-Westen, 1998, p. 1769). Among these, depressive, masochistic, passive-aggressive, and sadistic PD have been the most discussed, even though only sparsely investigated by researchers (Kernberg, 1992 and Millon et al., 2004). For instance, Johnson et al. (1999) found in an adolescent sample that PD diagnoses included in the appendix to DSM-IV (i.e., depressive and passive-aggressive PD) were more predictive of subsequent development of major mental disorders than either cluster A, B or C PDs. Of note, different measures largely used for personality assessment still include these personality styles (e.g., Millon, 2006), yet results concerning them are rarely presented. To our knowledge, little is known about whether emotion dysregulation and impulsivity could also characterize these personality styles. Thus, in the present study we first reviewed the extant literature, and then empirically tested the associations between emotion dysregulation, impulsivity and traits of each of these PD styles in a large community sample.