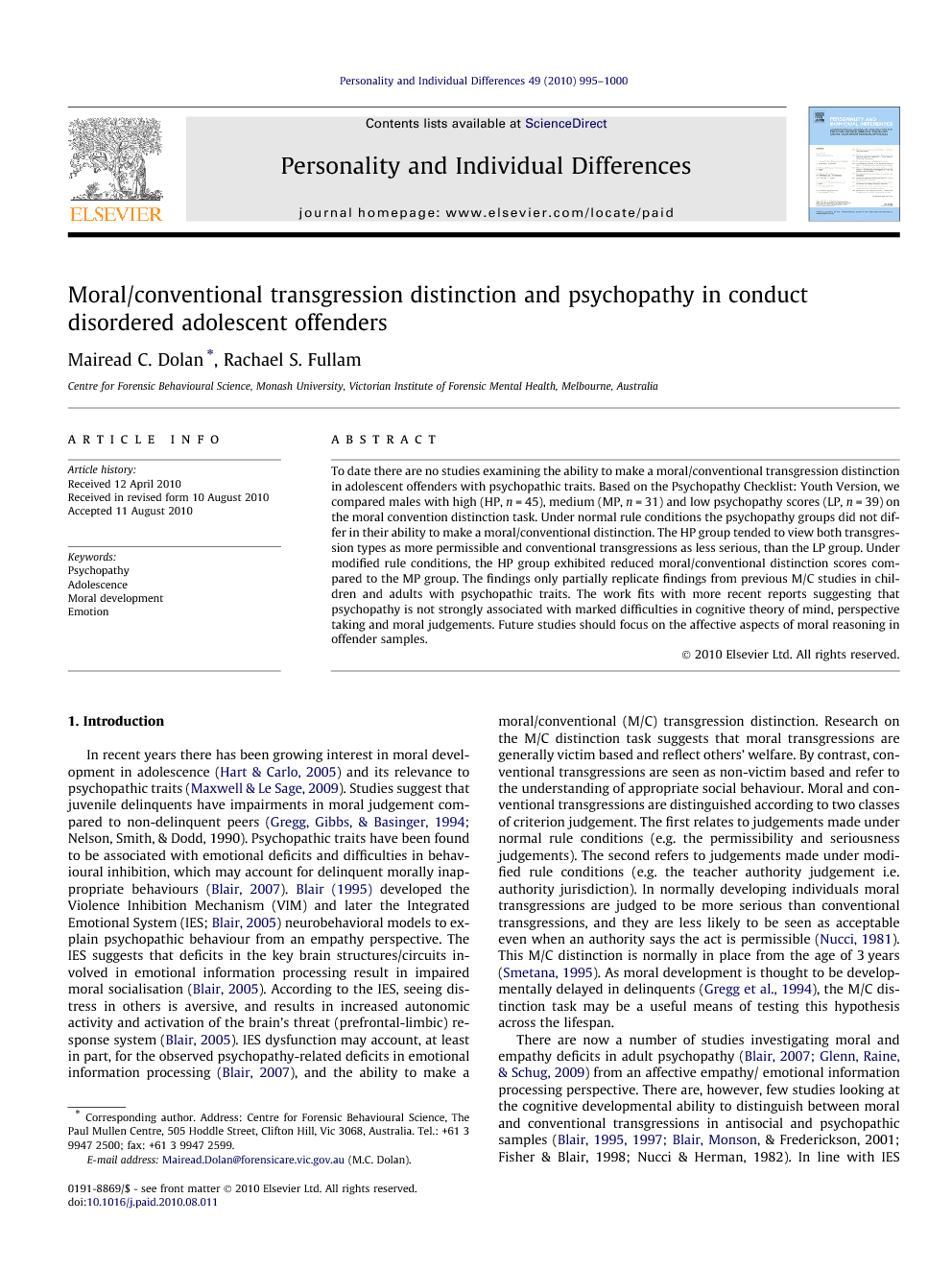 To date there are no studies examining the ability to make a moral/conventional transgression distinction in adolescent offenders with psychopathic traits. Based on the Psychopathy Checklist: Youth Version, we compared males with high (HP, n = 45), medium (MP, n = 31) and low psychopathy scores (LP, n = 39) on the moral convention distinction task. Under normal rule conditions the psychopathy groups did not differ in their ability to make a moral/conventional distinction. The HP group tended to view both transgression types as more permissible and conventional transgressions as less serious, than the LP group. Under modified rule conditions, the HP group exhibited reduced moral/conventional distinction scores compared to the MP group. The findings only partially replicate findings from previous M/C studies in children and adults with psychopathic traits. The work fits with more recent reports suggesting that psychopathy is not strongly associated with marked difficulties in cognitive theory of mind, perspective taking and moral judgements. Future studies should focus on the affective aspects of moral reasoning in offender samples.

In recent years there has been growing interest in moral development in adolescence (Hart & Carlo, 2005) and its relevance to psychopathic traits (Maxwell & Le Sage, 2009). Studies suggest that juvenile delinquents have impairments in moral judgement compared to non-delinquent peers (Gregg et al., 1994 and Nelson et al., 1990). Psychopathic traits have been found to be associated with emotional deficits and difficulties in behavioural inhibition, which may account for delinquent morally inappropriate behaviours (Blair, 2007). Blair (1995) developed the Violence Inhibition Mechanism (VIM) and later the Integrated Emotional System (IES; Blair, 2005) neurobehavioral models to explain psychopathic behaviour from an empathy perspective. The IES suggests that deficits in the key brain structures/circuits involved in emotional information processing result in impaired moral socialisation (Blair, 2005). According to the IES, seeing distress in others is aversive, and results in increased autonomic activity and activation of the brain’s threat (prefrontal-limbic) response system (Blair, 2005). IES dysfunction may account, at least in part, for the observed psychopathy-related deficits in emotional information processing (Blair, 2007), and the ability to make a moral/conventional (M/C) transgression distinction. Research on the M/C distinction task suggests that moral transgressions are generally victim based and reflect others’ welfare. By contrast, conventional transgressions are seen as non-victim based and refer to the understanding of appropriate social behaviour. Moral and conventional transgressions are distinguished according to two classes of criterion judgement. The first relates to judgements made under normal rule conditions (e.g. the permissibility and seriousness judgements). The second refers to judgements made under modified rule conditions (e.g. the teacher authority judgement i.e. authority jurisdiction). In normally developing individuals moral transgressions are judged to be more serious than conventional transgressions, and they are less likely to be seen as acceptable even when an authority says the act is permissible (Nucci, 1981). This M/C distinction is normally in place from the age of 3 years (Smetana, 1995). As moral development is thought to be developmentally delayed in delinquents (Gregg et al., 1994), the M/C distinction task may be a useful means of testing this hypothesis across the lifespan. There are now a number of studies investigating moral and empathy deficits in adult psychopathy (Blair, 2007 and Glenn et al., 2009) from an affective empathy/ emotional information processing perspective. There are, however, few studies looking at the cognitive developmental ability to distinguish between moral and conventional transgressions in antisocial and psychopathic samples (Blair, 1995, Blair, 1997, Blair et al., 2001, Fisher and Blair, 1998 and Nucci and Herman, 1982). In line with IES predictions, Blair (1995) reported that adult psychopaths treated conventional transgressions like moral transgressions and were less likely to refer to victim welfare. In children with psychopathic traits, Blair (1997) and Blair et al. (2001) noted that they did not differ from those without these traits in terms of the permissibility and seriousness of moral and conventional transgressions under normal rules, but high psychopathy scorers showed less of a M/C distinction than the controls in the modified rule condition. Blair (1997) initially found no psychopathy-related group differences in the number of references to victim welfare in a sample of children, but subsequently reported reduced reference to victim welfare under modified rule conditions in a larger sample of children with psychopathic traits (Blair et al., 2001). We investigated the relationship between psychopathy and the ability to make a M/C distinction in adolescent offenders. Based on Blair’s work, we hypothesized that adolescents with high psychopathy scores would show impairments in a range of domains in the M/C distinction task most notably under modified rule conditions, but that the findings from his data on children may be only partially supported as performance on the M/C task is developmentally influenced. Given the emphasis of the IES model of psychopathy on affective deficits, we also hypothesised that impaired performance on the moral/convention distinction task would be most strongly related to the affective facet of psychopathy.