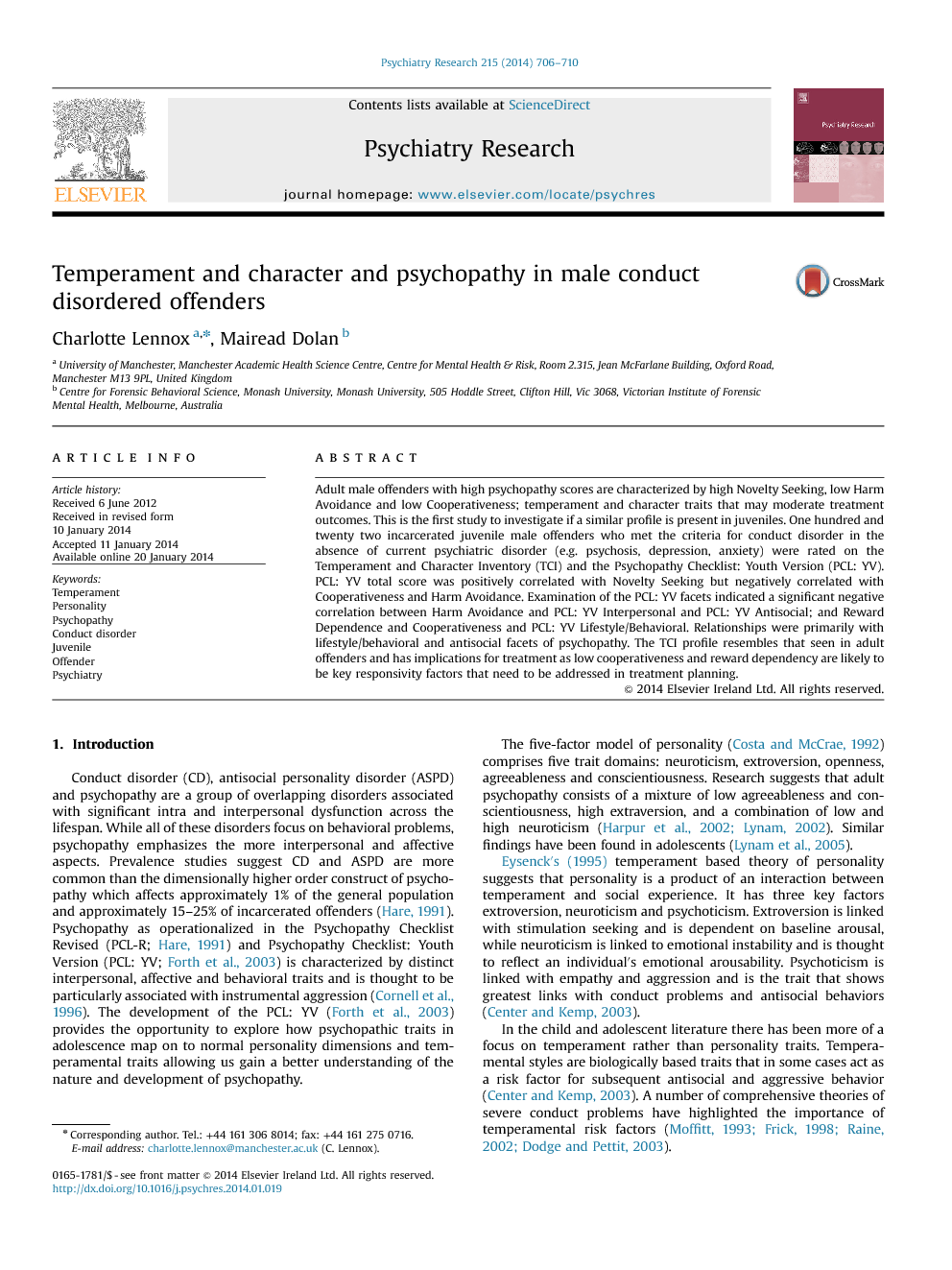 Adult male offenders with high psychopathy scores are characterized by high Novelty Seeking, low Harm Avoidance and low Cooperativeness; temperament and character traits that may moderate treatment outcomes. This is the first study to investigate if a similar profile is present in juveniles. One hundred and twenty two incarcerated juvenile male offenders who met the criteria for conduct disorder in the absence of current psychiatric disorder (e.g. psychosis, depression, anxiety) were rated on the Temperament and Character Inventory (TCI) and the Psychopathy Checklist: Youth Version (PCL: YV). PCL: YV total score was positively correlated with Novelty Seeking but negatively correlated with Cooperativeness and Harm Avoidance. Examination of the PCL: YV facets indicated a significant negative correlation between Harm Avoidance and PCL: YV Interpersonal and PCL: YV Antisocial; and Reward Dependence and Cooperativeness and PCL: YV Lifestyle/Behavioral. Relationships were primarily with lifestyle/behavioral and antisocial facets of psychopathy. The TCI profile resembles that seen in adult offenders and has implications for treatment as low cooperativeness and reward dependency are likely to be key responsivity factors that need to be addressed in treatment planning.

Conduct disorder (CD), antisocial personality disorder (ASPD) and psychopathy are a group of overlapping disorders associated with significant intra and interpersonal dysfunction across the lifespan. While all of these disorders focus on behavioral problems, psychopathy emphasizes the more interpersonal and affective aspects. Prevalence studies suggest CD and ASPD are more common than the dimensionally higher order construct of psychopathy which affects approximately 1% of the general population and approximately 15–25% of incarcerated offenders (Hare, 1991). Psychopathy as operationalized in the Psychopathy Checklist Revised (PCL-R; Hare, 1991) and Psychopathy Checklist: Youth Version (PCL: YV; Forth et al., 2003) is characterized by distinct interpersonal, affective and behavioral traits and is thought to be particularly associated with instrumental aggression (Cornell et al., 1996). The development of the PCL: YV (Forth et al., 2003) provides the opportunity to explore how psychopathic traits in adolescence map on to normal personality dimensions and temperamental traits allowing us gain a better understanding of the nature and development of psychopathy. The five-factor model of personality (Costa and McCrae, 1992) comprises five trait domains: neuroticism, extroversion, openness, agreeableness and conscientiousness. Research suggests that adult psychopathy consists of a mixture of low agreeableness and conscientiousness, high extraversion, and a combination of low and high neuroticism (Harpur et al., 2002 and Lynam, 2002). Similar findings have been found in adolescents (Lynam et al., 2005). Eysenck's (1995) temperament based theory of personality suggests that personality is a product of an interaction between temperament and social experience. It has three key factors extroversion, neuroticism and psychoticism. Extroversion is linked with stimulation seeking and is dependent on baseline arousal, while neuroticism is linked to emotional instability and is thought to reflect an individual's emotional arousability. Psychoticism is linked with empathy and aggression and is the trait that shows greatest links with conduct problems and antisocial behaviors (Center and Kemp, 2003). In the child and adolescent literature there has been more of a focus on temperament rather than personality traits. Temperamental styles are biologically based traits that in some cases act as a risk factor for subsequent antisocial and aggressive behavior (Center and Kemp, 2003). A number of comprehensive theories of severe conduct problems have highlighted the importance of temperamental risk factors (Moffitt, 1993, Frick, 1998, Raine, 2002 and Dodge and Pettit, 2003). In recent years, there has been interest in the application of the psycho-biological model of personality proposed by Cloninger, 2000 and Cloninger, 2003 in understanding personality disorder in general but also antisocial behavior across the lifespan. Temperamental dimensions of personality manifest themselves early in life and reflect individual differences in basic emotional drive. The Temperament and Character Inventory (TCI; Cloninger et al., 1994) identifies four dimensions of temperament: Novelty Seeking; Harm Avoidance; Reward Dependence and Persistence; and three aspects of character: Self-Directedness; Cooperativeness and Self-Transcendence. The presence of a personality disorder is indicated by low Self-Directedness and/or low Cooperativeness while subtypes of personality disorder are characterized by different configurations of temperamental traits (Svrakic et al., 1993, Cloninger, 2000 and Fossati et al., 2001). There are limited numbers of studies using the TCI to examine temperament in antisocial samples, but early work in adults with ASPD suggested a unique profile of high Novelty Seeking, low Harm Avoidance and low Reward Dependency (Cloninger et al., 1994). Studies looking at the relationship between psychopathy and the TCI suggest that psychopathy is positively correlated with Novelty Seeking in adults (Snowden and Gray, 2010; Basoglu et al., 2011); however, these studies had conflicting findings in relation to Harm Avoidance. Snowden and Gray (2010) found a negative association between psychopathy and Harm Avoidance, Basoglu et al. (2011) found a positive association between these traits. Inconsistent findings may reflect sample differences. There is very limited data on the TCI in juvenile antisocial samples. Atarhouch et al. (2004) assessed 47 juvenile offenders with CD and a sample of adolescents without CD on the TCI and found that CD was associated with low Harm Avoidance, Reward Dependence and Cooperativeness, but there were no significant differences for Novelty Seeking, Persistence, Self-Directedness and Self-Transcendence. The results largely replicated studies in antisocial adults but the lack of a significant finding for Novelty Seeking may reflect the fact that novelty seeking is common in adolescence even in non CD samples. Sevecke et al. (2010) found that psychopathic incarcerated girls had higher Novelty Seeking, but lower Reward Dependence, Cooperativeness and Self-Transcendence compared to non-psychopathic girls, but they were unable to demonstrate specific associations between psychopathy facets and these TCI dimensions. It is possible that low mean levels of psychopathic traits in the sample may account for the lack of findings. Based on previous research (Sevecke et al., 2010 and Snowden and Gray, 2010) it was predicted there would be positive correlations between PCL: YV scores and Novelty Seeking and negative correlations with Reward Dependence, Harm Avoidance and Cooperativeness. In relation to the four facets of the PCL: YV we predicted a positive correlation between Novelty Seeking and Facet 3 (Lifestyle/Behavioral), and negative correlations between Reward Dependence and Facet 2 (Affective) and Cooperativeness and Facet 3 (Lifestyle/Behavioral) and 4 (Antisocial). There were no specific hypotheses for other character dimensions but it was anticipated that low Self-Directedness (thought to reflect personality disorder pathology) may be associated with higher psychopathy scores.