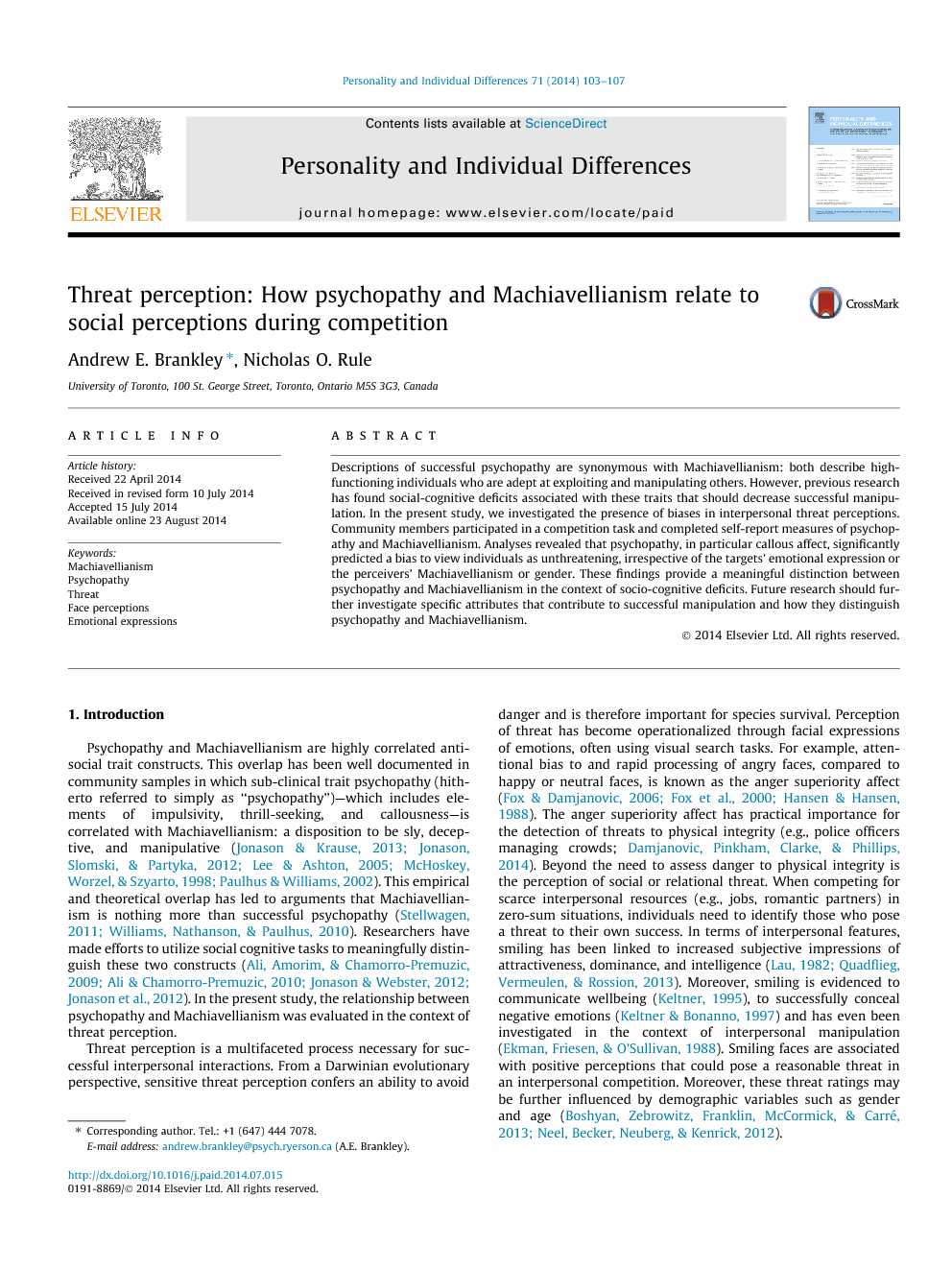 Psychopathy and Machiavellianism are highly correlated antisocial trait constructs. This overlap has been well documented in community samples in which sub-clinical trait psychopathy (hitherto referred to simply as “psychopathy”)—which includes elements of impulsivity, thrill-seeking, and callousness—is correlated with Machiavellianism: a disposition to be sly, deceptive, and manipulative (Jonason and Krause, 2013, Jonason et al., 2012, Lee and Ashton, 2005, McHoskey et al., 1998 and Paulhus and Williams, 2002). This empirical and theoretical overlap has led to arguments that Machiavellianism is nothing more than successful psychopathy (Stellwagen, 2011 and Williams et al., 2010). Researchers have made efforts to utilize social cognitive tasks to meaningfully distinguish these two constructs (Ali et al., 2009, Ali and Chamorro-Premuzic, 2010, Jonason and Webster, 2012 and Jonason et al., 2012). In the present study, the relationship between psychopathy and Machiavellianism was evaluated in the context of threat perception. Threat perception is a multifaceted process necessary for successful interpersonal interactions. From a Darwinian evolutionary perspective, sensitive threat perception confers an ability to avoid danger and is therefore important for species survival. Perception of threat has become operationalized through facial expressions of emotions, often using visual search tasks. For example, attentional bias to and rapid processing of angry faces, compared to happy or neutral faces, is known as the anger superiority affect (Fox and Damjanovic, 2006, Fox et al., 2000 and Hansen and Hansen, 1988). The anger superiority affect has practical importance for the detection of threats to physical integrity (e.g., police officers managing crowds; Damjanovic, Pinkham, Clarke, & Phillips, 2014). Beyond the need to assess danger to physical integrity is the perception of social or relational threat. When competing for scarce interpersonal resources (e.g., jobs, romantic partners) in zero-sum situations, individuals need to identify those who pose a threat to their own success. In terms of interpersonal features, smiling has been linked to increased subjective impressions of attractiveness, dominance, and intelligence (Lau, 1982 and Quadflieg et al., 2013). Moreover, smiling is evidenced to communicate wellbeing (Keltner, 1995), to successfully conceal negative emotions (Keltner & Bonanno, 1997) and has even been investigated in the context of interpersonal manipulation (Ekman, Friesen, & O’Sullivan, 1988). Smiling faces are associated with positive perceptions that could pose a reasonable threat in an interpersonal competition. Moreover, these threat ratings may be further influenced by demographic variables such as gender and age (Boshyan et al., 2013 and Neel et al., 2012). Described as interpersonally toxic, both psychopathy and Machiavellianism have been associated with global empathy deficits in the perception of emotions from faces (Ali and Chamorro-Premuzic, 2010, Ali et al., 2009 and Wai and Tiliopoulos, 2012). In clinical populations, psychopathy has been linked with deficits in the recognition of fear, sadness, and surprise from faces, but not with anger or happiness (Marsh & Blair, 2008). These results have been mirrored in community samples where researchers further found that psychopathy predicted misperceptions of sad faces as displaying positive affect and neutral faces as displaying negative affect (Ali et al., 2009). On the other hand, researchers have argued that empathy deficits associated with Machiavellianism are confounded with alexithymia (Al Ain et al., 2013 and Wastell and Booth, 2003). However, it is unclear whether social cognitive biases in psychopathy and Machiavellianism relate to threat perception. In the present study, we sought to further clarify whether the emotion processing deficits associated with psychopathy and Machiavellianism extend to the detection of social threat using a hypothetical competition task. Based upon evidence for socio-cognitive deficits in face perception, it is reasonable to expect that Machiavellianism and psychopathy would demonstrate biases in threat perception irrespective of facial affect. Therefore, we hypothesized (1) that threat perception would vary by targets’ emotional expressions, (2) that psychopathy and Machiavellianism would be highly correlated, and (3) that psychopathy and Machiavellianism would be related to a bias in threat perception independent of the target’s specific emotional expression.